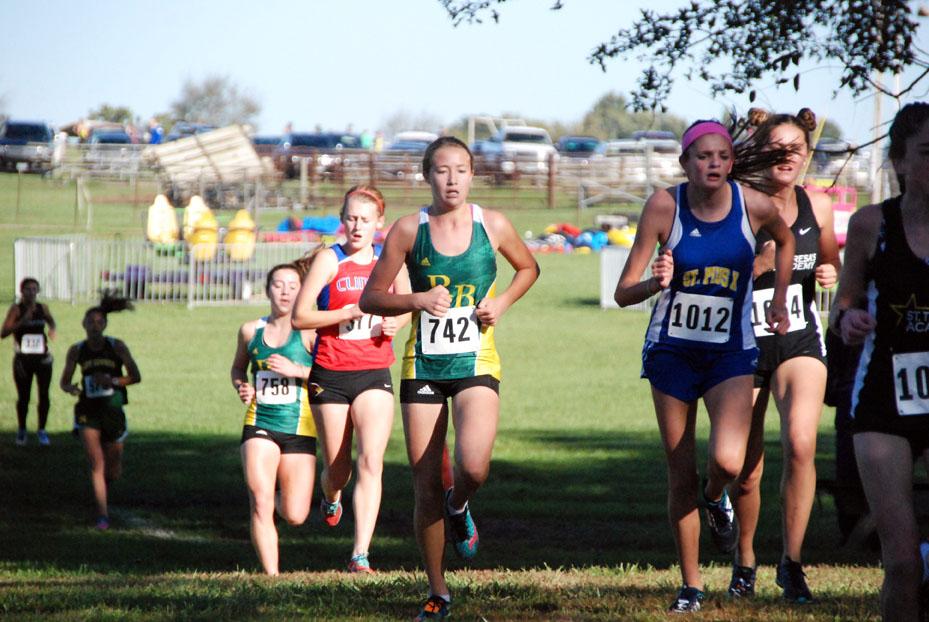 [dropcap size=”4″]A[/dropcap]fter losing in the state tournament last year — the boys finished fourth, and the girls finished 14th, respectively — the cross country team is seeking another run at the state title this season. The boys were able to clinch the No. 1 spot in all but two of their meets in the regular season. Most notably, the Bruins triumphed against the top team in the state, Rockhurst, in the Kearney Invitational on Oct. 8. RBHS was able to put up a total team score of 31, edging out Rockhurst’s 37.

“I’ve been pleased with how our season has gone so far,” head coach Neal Blackburn said. “We’ve been able to train at a high level consistently without too many interruptions or speed bumps along the way.”

Senior Sam Baumer agrees with Blackburn, saying he believes one of the reasons for the boys’ success is the connection they formed over the regular season.

“I think our guys have really bonded and formed some awesome chemistry which is what it takes to compete as a team when you are trying to be state champions,” Baumer said. “We took a little while to get our packing running down this year which is critical to get the lowest score.”

The girls also had a fairly respectable year, managing to place second in a majority of their meets. Such success would carry onto the district competition for both teams. The boys scored a total of 21, while the girls secured a score of 79. With these numbers, both teams clinched the district championships on Oct. 22.

“We have all had great performances at different times throughout the season, so it was really cool to see what we can do together as a team,” senior Rebecca Rubinstein said. “Going into districts we were nervous and thought we could make top four, but having won five district championships in a row, our goal was to continue that.”

After their triumphs in the district tournament, RBHS is now setting its sights on the upcoming sectional tournament Saturday. The boys’ and girls’ teams will face high-ranking state adversaries, including Saint Louis University High (SLUH) and Nerinx Hall. With this in mind, Blackburn still has high hopes.

“My hope is that our boys can continue to run well, capture a sectional title and learn all we can in the hopes of returning to the state championships with a certain goal in mind,” Blackburn said. “I would like to see our girls secure a top three spot while competing for a sectional title and solidify a spot in the state championships. The boys have most recently defeated the No. 1 ranked team, Rockhurst, yet we are somehow still playing the role of underdog. We will try to come in under the radar these final two weeks.”

How deep will Rock Bridge get at state? Leave your thoughts in the comments below.

The works of Knight Zhang