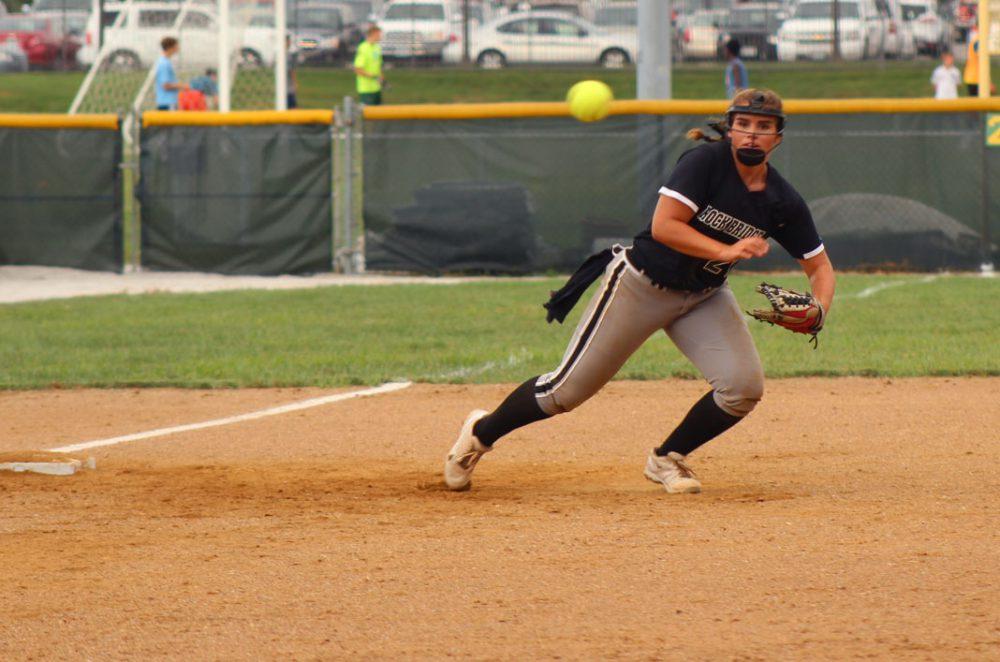 Junior third baseman Ashleigh McKinley hustles to field the ball in order to get an out at first in a game earlier in the season. After capturing two victories in district play, the Lady Bruins ultimately fell 8-5 to Blue Springs South (BSS), who became the district champion Oct. 8. Photo by Cassidy Viox

Losing in the first round of the district tournament  last year, the Lady Bruins had better success this season, coming away with two victories. Held in Grain Valley from Oct. 5-8, the tournament featured six teams fighting for the district title.  The Bruins fell short in the championship game against Blue Springs South (BSS), ending the season with a 22-7 record and a second place finish in the district tournament.

Despite being a team with only two seniors, the young squad exceeded last year’s success in the tournament. Though their season has come to a close, the efforts they put on the field were satisfactory nonetheless, in the eyes of head coach Janel Twehous.

The Bruins began play in the tournament Oct. 5 against Smith-Cotton, which turned out to be an 11-2 blowout victory.

“This was probably our easiest game of the tournament, but the fact that we played our game and didn’t stoop down to their level sets us up well,” sophomore right fielder Maddie Murphy said.  “We have been connecting hits and working well together as a team to pull out team wins, not just individuals.”

After clinching a victory in the first game, the athletes prepared for the second game against Grain Valley, who hosted the tournament.  Due to inclement weather, that game was postponed until Oct. 7.  In the passionate matchup, the players were able to pull of a close 6-5 win.

“[It was an] intense game.  [We] pulled together as a team and had a team victory,” Twehous said.  “We jumped on them fast and continued to pound away till the fourth inning then held on.  They held us to only nine hits, which is low for us.”

Despite being a nailbiter, the match brought more than just intensity in the midst of trying to pull off a win.

“We all love that adrenaline rush when the game is so close and you feel so close to a win but can’t guarantee it,” Murphy said.  “That’s when everyone comes together and pulls though to get the win.  It was just a great experience.”

Oct. 8, however, was the day in which the winning streak came to an end for the Lady Bruins.  They found themselves on the losing side of an 8-5 game against BSS, who emerged as the district champion.

With a fall in the championship game, and an end to all matches, junior Alexis Burks finds the importance more in her team rather than results. Though Burks attends Columbia Independent School, the third baseman still represented RBHS as she prepared to play when she took the field Saturday afternoon Oct 8.

“It’s more sad that the season is over because our seniors are leaving,” Burks said.  “Softball is a team sport, not an individual sport, and as a team we have come a long way.  We’ve learned to feed off each others energy and build each other up, not tear out teammates down.”

While the heartbreaking loss in the championship game did mark the end of a season, Twehous believes the entire progression gave great practice to create a well-structured team.

“You use the entire season as a building block to work on team cohesiveness, individual athlete’s goals, team goals, and improve after every single game,” Twehous said.  “Some athletes worked on a better batting average this year, another worked on more stolen bases and another worked on less mental mistakes.  As a team, I focus on all aspects of the game and more importantly bringing the group together and playing as a team.”

The five month season of continuous drills and speed work ultimately all came down to the game when the remainder of their season was on the line.  Despite coming to a close, the hours of work put into every tournament and game, were worth it in the end for the 23 members.

“I have an amazing group of friends that I wouldn’t have if it weren’t for softball,”  Burks said. “We have all grown so close and it’s an unbreakable bond.  We’ve continued to improve and relearn basics skills and go out of our comfort zones to try new things and to better ourselves.”

Do you think the Lady Bruins had an improved season this year in terms of performance and skill? Comment your thoughts in the comments below!