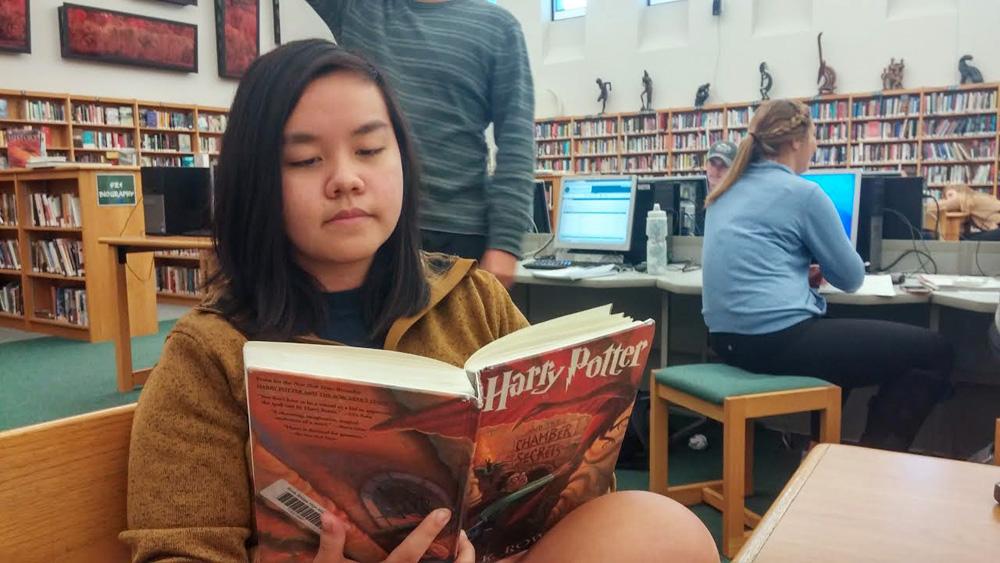 Junior Billie Huang, an avid fan of the series, reads a Harry Potter novel in the school library. Photo by Rochita Ghosh.

[dropcap]W[/dropcap]hile death eaters, working wands and dementors won’t be at Hickman High School (HHS), some Columbian’s will compete to answer questions regarding all things Harry Potter as they test their knowledge about the magical fantasy.

The fifth annual Harry Potter Trivia Night is to take place at the Hogwarts School of Witchcraft and Wizardry, more commonly known as HHS, on Friday. Teams of up to eight will compete for the title of Trivia Triwizard Champions. The night will have eight rounds of questions as well as challenge rounds too.

The event is sponsored by the Columbia Kiwanis Club civic organization and Columbia Public Schools (CPS).  They are in efforts to benefit Beads of Courage, a program for children coping with illnesses.

[quote]“We chose Beads of Courage because it helps kids, and we care about kids.  Children who are very ill find comfort and meaning with the Beads of Courage program,” event coordinator Jennifer Roberts said.  “It helps them cope with pain, fear, and stress during their treatment.”[/quote]

The Columbia Kiwanis Club has also partnered with the University of Women to make the night come together.

“The Columbia Kiwanis Club raises money for kid’s causes in our area and around the world,” Roberts said.   “There are Kiwanis Clubs all over the world and our club was started in 1922.”

Besides being a gathering for fans, RBHS’s Harry Potter club, known as Dumbledore’s Army, has their own excitement regarding the event. The creation of the club was to welcome passionate fans and to experience moments where fun and fundraising come together.

“[The club] has been in existence since before I took over sponsorship and I believe, since before I started working at RBHS 12 years ago,” club sponsor Rachel Reed said.  “It used to be called the Portkey Club.  My guess is that it started so a group could discuss the books and all things Harry Potter.”

For Dumbledore’s Army member and sophomore Emma Burton, the Harry Potter trivia night serves as a meeting place for those with a common interest.

“I would consider myself a Harry Potter fan because I love the books,” Burton said.  “Others may prefer the movies, but I am just in love with the writing that Rowling puts into it.  It’s just like a little Harry Potter community.”

The growing energy Harry Potter enthusiasts bring has allowed the event to continue its tradition for multiple years.  Besides being an event of entertainment, the competition and costumes are put aside when the contestants realize the cause they are supporting.

“People feel good about where their money is going,” Roberts said.  “Sometimes Potter fans also make new friends if they register as an individual. You never know who might be on your team. [They] could be 10 years old or 70 years old, that’s the special thing about Potter fans.”

On top of donating to a beneficial cause, the celebration continues to pull in more fans each year. The combination of games, questions and the opportunity to help children in need persuade the participation of many.

“We have sold out almost every year, so it’s always a full house,” Roberts said.  “We have had a different theme each year: Dragons, Harry’s Birthday Party [and] Quidditch, for instance. This year, we are having a Yule theme. Each team will be bringing a Harry Potter themed table top Yule tree.”

For the 256 participants that compete and donate to a valuable cause, the night adds magic to themselves and sick patients around the community.

“We all share a common interest,” Burton said.  “We can all come together to have a friendly competition in something we think is fun and enjoy.”

Will you be attending the Harry Potter trivia night? Let us know in the comments below.

Academic benefits are available to siblings at the same school