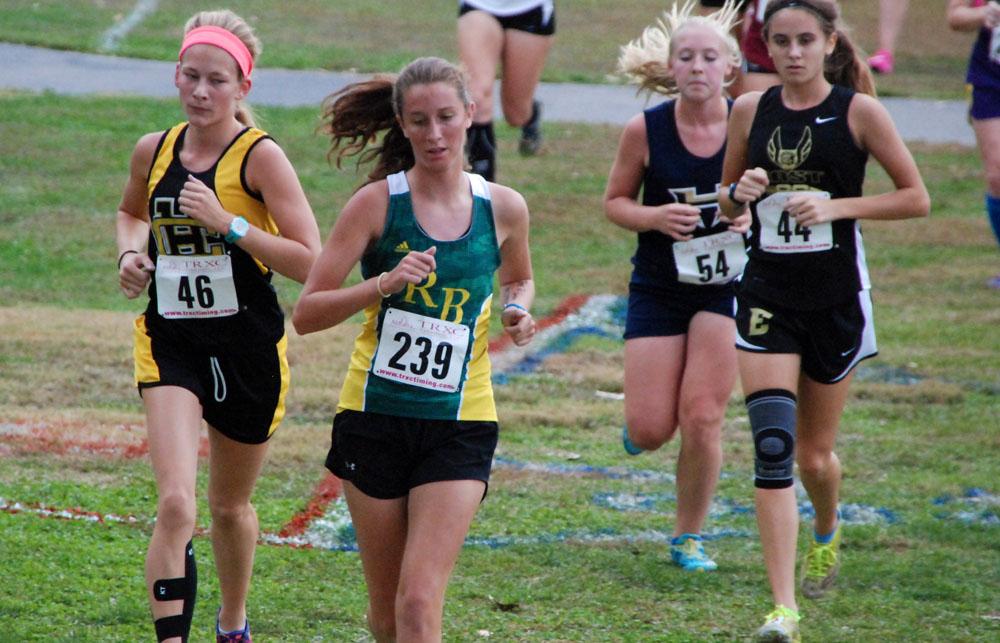 [dropcap size=”4″]A[/dropcap]fter a season filled with ups and downs, the boys and girls cross country teams qualified to compete at the state meet again this year. Last season, both teams competed at the state level, with the girls placing 14th and the boys placing fourth, respectively. In today’s state meet, the boys rose in placement, earning second, while the girls placed 14th overall.

“State didn’t quite go the way we wanted it to,” junior Caroline Stevens said. “Individually, we had some runners place high enough to receive All-State honors and run personal bests, which is great.”

Leading up to the state meet, the boys were confident in their ability to perform well and only lost the state title by seven points. While the hilly course proved to be a challenge, the Bruins persevered and had set expectations in their minds as they raced.

“Throughout the season the guys wanted to get on the podium at state, and as they competed they wanted to race for first,” Stevens said. “On the girls side, we just wanted to go out there and run our own race, stay in our packs, and be strong.”

Before making it to the state championships, however, the team had a strong season, with both teams meeting expectations in a fine manner. The boys, for example, crushed Rockhurst High School, then the second-ranked team in the state, at the Kearney Invitational Oct. 8.

“The girls defied expectations leading to state, and the boys met expectations,” senior Aliyah Blackburn said. “I think it was a pretty successful season.”

Placing 14th overall, Stevens said the girls are somewhat disappointed; despite of this, they are still pleased that they ended the season stronger than they started. The loss of senior runners did little to deter this year’s team and they all worked harder to get to state.

“The girls placed 14th, which is tough to swallow; but we ran hard, and our goal wasn’t necessarily to have a certain place,” Stevens said. “We lost some talented seniors last year so our underclassmen really had to step it up, which is difficult since they’re inexperienced.”

With this marking the final meet of Blackburn’s tenure as a Bruin runner, she’s disheartened over the fact that she will no longer be a part of the team’s roster next year. With all the time and energy that athletes put into their sport, it can be hard to leave it all behind. Blackburn, nonetheless, is extremely satisfied that she finished her last meet so well, and hopes both the boys and girls can experience great success in the future.

“Cross country has [had] such a big impact on my life. It’s given me great friends and helped me grow stronger as a competitor, and a person overall,” Blackburn said. “I’m very sad [for it] to be ending, but I don’t think it could’ve ended better.”

In your eyes, how did cross country perform this postseason? Comment and let us know.

I’m also apart of the cross country team and I’ve felt we have worked very hard to get where we are now. Both boys and girls at state this past weekend were very strong when competing and it was definitely an exciting thing to watch. Overall, some meets were better than others, but all of the practices each athlete has attended have really paid off now that we look back on it.

The piece is very well written. Although I am not in cross country, I followed their success closely as I have many close friends who are. Personally I believe they did an amazing job. Even though they did not win state and as an athlete it is something we strive for, everyone did their best and grew both as a runner and a person. I have heard countless stories about how cross country has had a positive impact on a person’s life and I look forward to possibly being a part of track come spring. Thank you for sharing, I always enjoy reading your writing.