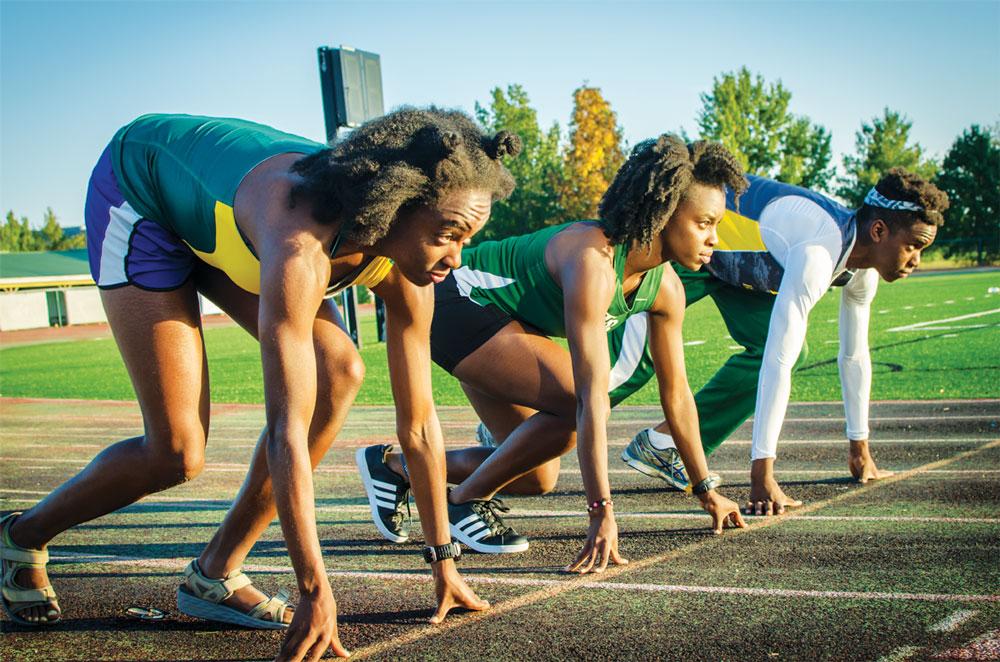 [dropcap size=”4″]A[/dropcap]s the banners hanging on the walls of the main gym may indicate, RBHS has experienced great athletic success during its illustrious 43-year existence. But, as seniors graduate, coaches must turn to younger athletes in order to maintain elite performance.

In the last five years, and perhaps for three more, one Bruin family has passed the baton, both literally and figuratively, for RBHS.

The Shonekan family, featuring college freshman Faramola, high school senior Ojurere and high school sophomore Mojuba, have displayed their talent on the track for RBHS. While they each specialize in different events, the three siblings have created a bond both on and off the track during the past several years.

Faramola, the oldest sister and an 800 meter specialist, boasts a personal record of 2:18.50 in her primary event. She believes the coaches at RBHS and her siblings are the main reason for her family’s success in the lore of RBHS track. Also a former sprinter for three different RBHS relay events, Faramola hopes that her impressive career as a Bruin inspires her younger siblings, hopefully in the same way they have inspired her.

“I think them seeing me run varsity my freshman year and go to state every single year has influenced them greatly, because it has made them motivated to work hard in practice so that they could have the same experiences that I had all four years in high school,” Faramola Shonekan, who runs for the University of Missouri—Columbia, said. “Every race that I ran or competed in, I raced with that mindset that I was setting an example for them and also wanting to make them proud.”

[pullquote]”In practice, we’re all about our business — [there’s] not much messing around.” Mojuba Shonekan, sophomore[/pullquote]

Ojurere, the second oldest out of the siblings, also established her dominance in the sport; she won the state championship in the long jump last year with a jump of 18’9.28”.

As a centerpiece of RBHS’s 4×200 and 4×400 relay events, Ojurere credits her siblings for their support and during races as a source of motivation.

“My brother and my sister have definitely made an impact on my athletic career at RBHS,” Ojurere Shonekan said. “They push me to be better, and I really have loved having them around. I always want to make them proud. If I’m competing and I hear either one of them cheering for me, their voices will cut through the crowd better than anyone else’s.”

While Ojurere often follows her sister’s footsteps on the track, she triumphed over her this year on the field. Both Shonekan sisters were featured on the homecoming court in their respective senior years, but Ojurere left with the crown.

“I thought it was cool that we both got on the court,” Faramola Shonekan said. “When I found out that she won, I was only slightly bitter but got over it pretty quickly. I was mostly really proud of her, and I like to think that she’s my protégé so it’s thanks to me that she won. Plus, a win for a Shonekan is a win for us all, so I’m just really proud and really excited for her.”

While Faramola and Ojurere have shined as RBHS student-athletes, Mojuba, also an 800 meter sprinter and the youngest of the three, explained that growing up with his sisters in the spotlight was at times disheartening but mostly a source of pride.

“I’ve felt overshadowed by both of my sisters prior to high school. Reading about them in the newspaper made me feel as if I was left out, but at the same time I was proud of them,” Mojuba Shonekan said. “At the end of the day, I try and worry about my personal performances and not primarily them. But I’m always proud of them no matter what.”

Nevertheless, Mojuba finds motivation in his siblings, although this inspiration is provided in a slightly different manner.

“The fact that my sisters both ran at RBHS before me definitely has an impact on me. They set the bar high on the track, and I hope to succeed just as well as they did,” Mojuba Shonekan said. “Both of [my sisters] ran at the state meet their freshman year, so the fact that I didn’t was kind of disappointing from my perspective. [My sisters and I] are all very competitive when it comes to track. In practice, we’re all about our business — [there’s] not much messing around.”

Mojuba still hopes to one-up and live up to the legacy his sisters set for him as he continues his career as a Bruin athlete.

“I want a shot of getting the 800 [meter] school record,” Mojuba Shonekan said. “I also hope to continue running in college like Faramola. Ojurere was a state champion [in high school] . . . so that’s something that must be cool to accomplish. All of this is easier said than done though, so I’m going to have to put the work in first.”

Among the three of them, the Shonekans have already established an impact on the RBHS athletic department, both in the record books and on the highest levels of Missouri’s high school competitions.

With one final track season remaining for Ojurere and a bright future for Mojuba, the two remaining RBHS athletes hope to build on their family’s impact during the rest of their tenure as Bruins.

“I believe we have made a pretty nice legacy at RBHS,” Ojurere Shonekan said. “There have been some pretty epic sibling duos who’ve come through and made the program an awesome one, and I hope that we as a trio leave RBHS a little different than we found it.”

Are there any other dominant Bruin siblings who you believe should be recognized? Feel free to leave your suggestions in the comments below.

Lessons from TigerPlace: ‘My political belief is to be free’

Instead of complaining, just stop sleeping