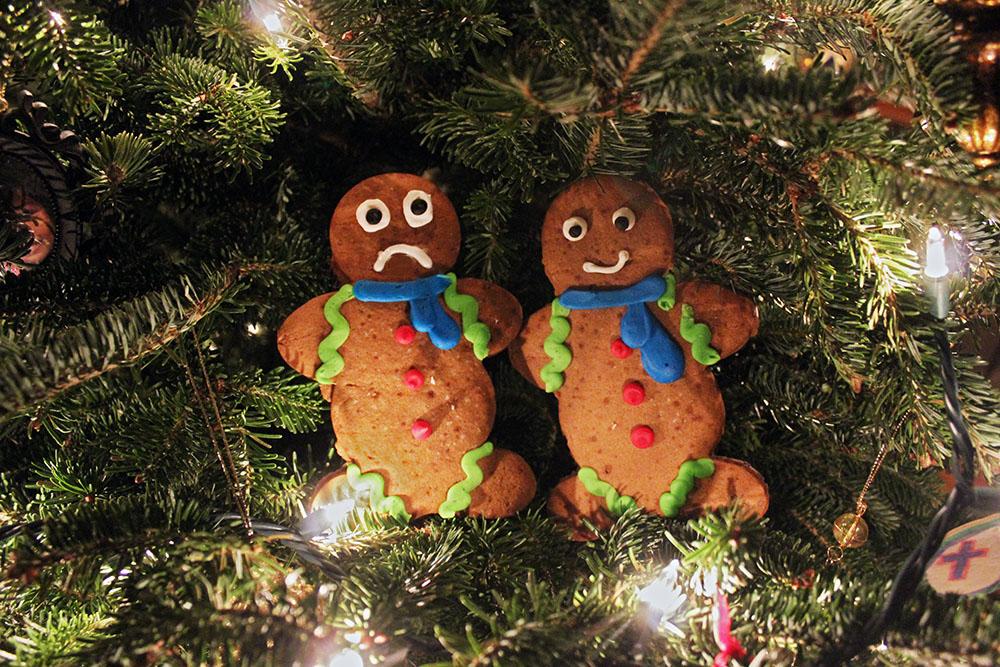 The day after Thanksgiving freshman Riley Kerns rose at dawn. She did not get up for Black Friday deals but to decorate her entire home with Christmas furnishings. Kerns loves Christmas. The music, the food and merriment all delight her.

“This time during the year it always seems that people can be a little happier and have a little more hope than the rest of the year,” Kerns said. “It expresses a time of giving, which is what people say is the true meaning of Christmas.”

Beyond the cookies and twinkling lights, Kerns finds pleasure in giving back to the community this season. Her family donates to her church’s ‘Tree of Hope,’ which contributes clothes and toys to families in need. Even outside of her church, charity seems to be in the air.

“You always see a bell ringer in front of department stores or grocery stores,” Kerns said. “Whether or not you’ve ever donated before they are always outside in the cold with their red buckets. When you haven’t even seen them yet but hear a bell ringing you know who it is. Kind of like a Christmas carol that you know once you hear the first note.”

These chimes come from the Salvation Army’s red kettle program. Since its inception in 1891, the project has been an iconic part of the holiday season. These vibrant buckets and bells appear on television, movie screens and nearly every grocery store in the country. Kerns admires the volunteers for this program, as they are helping their community for the entire year, not just Christmas.

“The proceeds of the sales at the thrift stores go right back into this community to provide money to keep our programs going, particularly our Salvation Army Harbor House,” Salvation Army regional director of development Cynthia Chapman said. “That is a 61 bed, full service homeless shelter, the only one like it in the area because it serves not only parents with children, but also single adults including seniors and veterans.”

The money also goes back to the Salvation Army’s thrift stores and to providing case management for those in need. Contributions to the red kettle campaign goes toward the $413,000 yearly budget. These funds also come from other places, like charitable donations, but the Christmas season is the most concentrated effort for fundraising.

This increase in giving accompanies the spirit of the holidays. People want to give back and see their community benefit. Chapman believes that Columbia citizens in particular are very invested in giving back to their community. She said there is a special joy in helping someone get back on their feet.

“[People] know that the Salvation Army is a trusted organization [and] is doing the most good in our community…” Chapman said. “People know Salvation Army is about helping people who need help. They see that as the natural extension of their desire to be part of that giving back to the community.”

This altruism has become a tradition in all senses. Giving every year is repeated not just by individuals, but by families for generations.

One student who gives back during the holidays is sophomore Reagan Allen. Before Christmas for the past two years, Allen and her family go to Kansas City and hand out care packages to the homeless. The packages include necessities such as toothbrushes, gloves and even cash.

Allen believes because she has such a happy holiday season, it is her duty to spread that joy to other people who are less fortunate. She sees that joy being spread when she lights up the faces of those she helps.

“I think it was something that has always been sad to my family that while we are all happy celebrating the holidays getting and giving gifts. There are people on the streets that are all alone and any little something we can give them can hopefully make them a little happier,” Allen said.

Kerns agrees with Allen. She knows that volunteering is a noble thing to do all year long, but like with most things for Kerns, it’s only made better by the Christmas spirit.

“Holidays are a time where people remember to care and give to those who haven’t had the easiest life,” Kerns said. “Everyone should have the opportunity to be happy during the most wonderful time of the year. If you have the chance to help someone that might not have had a warm place to stay, or enough food, or simply the gift of love, it is important to volunteer during the holidays. It may not be a big deal to you but it can be everything the the people you help.”

Unfamiliar dialect should not warrant criticism