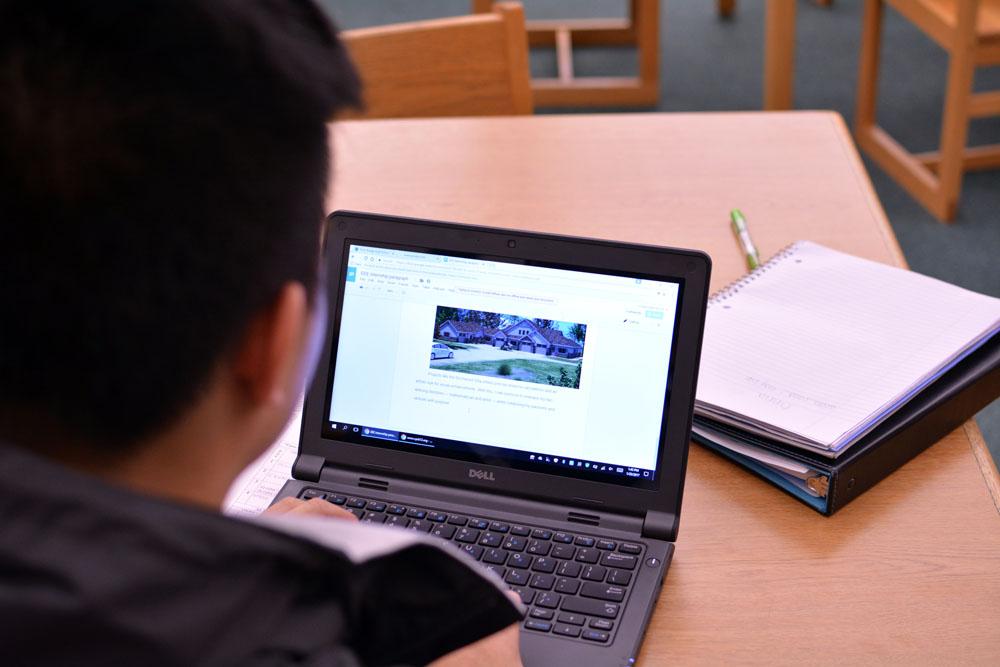 [dropcap style=”flat” size=”4″]W[/dropcap]hile the one to one program was decided, there are some details still needed to be figured out. It has been determined that next school year, each student will be given a laptop to use for school, according to an email sent to teachers by Principal Dr. Jennifer Rukstad. The kind of laptop has not been decided yet and to help CPS make that decision, CPS faculty have selected certain students to test them out.

“The students are the RBHS representatives to Dr. Stiepleman’s high school student advisory committee,” Director of the CPS Technology Services Department, Dr. Chris Diggs said. “We distributed 13 Dell laptops with touch screens that Dell provided as a ‘try and buy,’ which means they are samples we are borrowing from them.”

Along with students on the committee giving feedback about the laptops to CPS, teachers and other employees are testing the technology as well. Baumstark said the device needs to meet certain technical, functional and cost requirements.

The student advisory committee has been in effect each o9f the last 10 years, Baumstark said. The principals pick two to four students to be a part of the committee. There is a high school and middle school advisory, which meet with the superintendent at least four times a year. Students in the group are considered leaders in their school with activities, athletics or academics, she said.

“The advisory committee discusses items going on in the school district with the superintendent,” CPS Community Relations Director Michelle Baumstark said. “Topics have ranged from school start times to course scheduling and selection to bullying to technology to school lunch. Students can also submit topics they’d like to discuss with the superintendent.”

“I’ve been able to take it home and use it at home and throughout the day,” Hajicek said. “It hooks up to wifi at school and at my house so I can write essays, do homework, etc.”

Along with being able to take the laptop home, the students were given a evaluation sheet. On the sheet are details and space for student comments, for things like the screen size, battery life and processing speed. This allows CPS to see if the technology is convenient or useful and what the students thought of it.

Earlier this year there was a debate on whether the one to one program should use laptops or iPads, because of the mixed reactions that Advanced Placement (AP) students had with their iPads. Senior Ojurere Shonekan, another of the four RBHS students testing out the laptops, was pleasantly surprised that CPS made the decisions to give students laptops instead of iPads.

“When I use the laptop, I try to put my AP iPad on the back burner to see if it can really replace it,” Shonekan said. “So far, it’s been a good system of deciding if it’s better.”

Because the one to one program is for students, it makes sense that high schoolers are testing the laptops out to see which one is the best. Hajicek agrees and says that is a great idea that students are evaluating the technology.

“[Students] can give Dr. Stiepleman feedback so he can make the best decision going forward with the one to one with electronic devices for students,” Hajicek said. “It gives him the opportunity to hear from students how they like the devices and how effective they are on helping students learn and get their work done.”

What do you think of the one to one program? Let us know in the comments below.