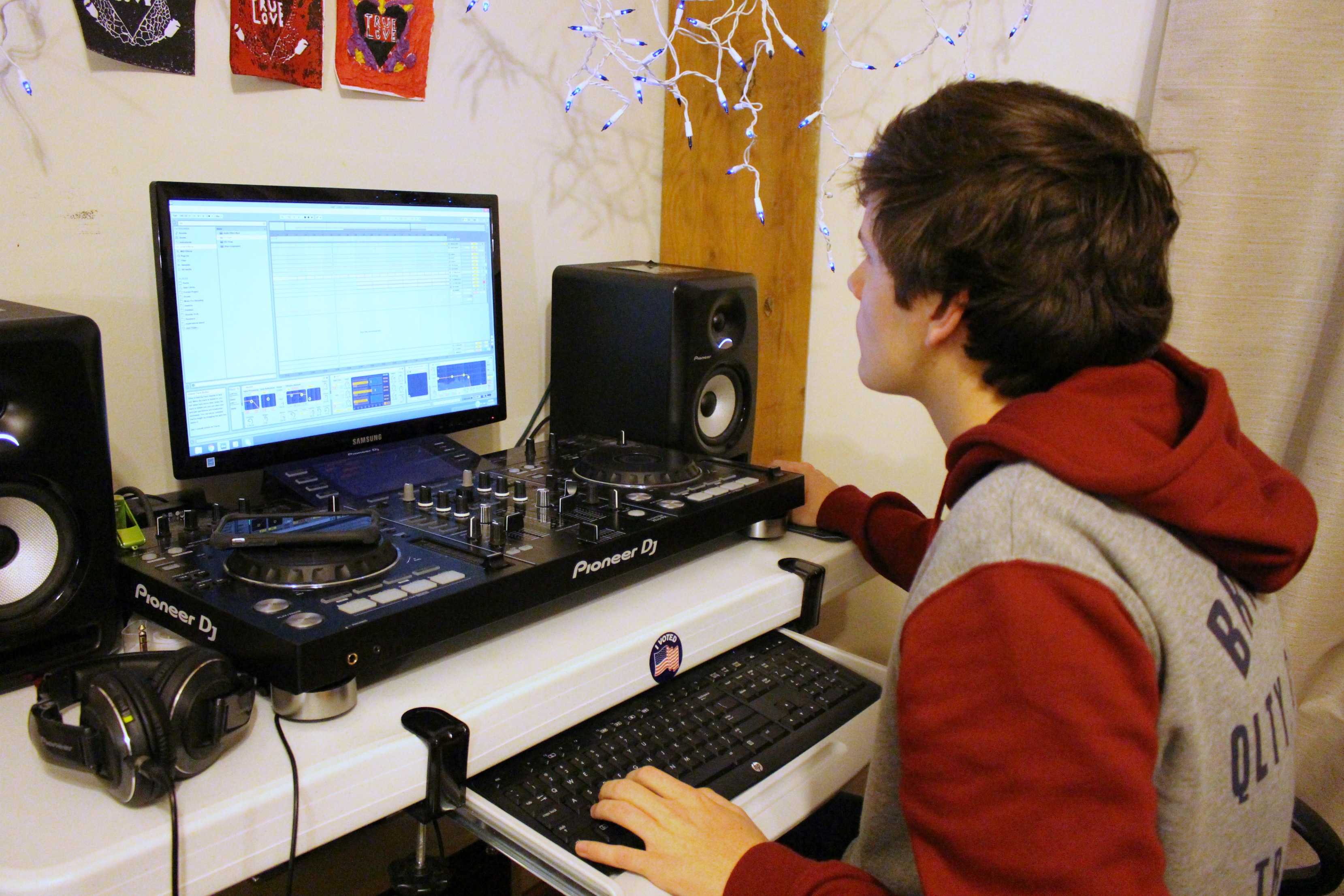 Yelton sits at his music studio in his room and looks through the tracks in his song, "Hawaii."

Sophomore Ben Yelton walks through Michigan Ave. in Chicago, IL and turns a corner onto Grant Park. The string of people he walks among suddenly thickens to become a massive crowd, all sporting sunglasses, hats and festival merchandise. The air smells of sunscreen and sweat as the sun beats down on him. It is a sweltering day in early August at the Lollapalooza music festival.

He finds the correct venue and makes his way further into the crowd that has already gathered to see Skrillex, an electronic music producer. Yelton waits in anticipation until he finally sees the performer emerge from backstage to greet the crowd.

“I remember standing in the crowd beforehand and being so nervous because I had wanted to see him for ages,” Yelton said. “My first impression was how sonically deep the sound was — I had never really been to a loud concert before — and that it was amazing. Sometimes when the drop of a song hits, fire would come out of the stage, and I could literally feel the heat of the fire on my face. I’ll never forget it.”

Now, artists like Skrillex are some of Yelton’s inspirations for making music. However, he wasn’t always so receptive to electronic music.

In fifth grade, a friend of Yelton’s introduced him to electronic music. At first he “didn’t really think much of it,” however, the alternative music grew on him and turned into a passion. He has now been producing music, which he uploads to his SoundCloud account, for about two and a half years.

“What I do is I make music on my computer. There’s a lot of different [Digital Audio Workstations] (DAW) that you can use. I like to use this one called Ableton Live 9, which is very sleek, and I just think it looks very nice. Inside of a DAW is basically your workspace… It’s where everything happens on a broad spectrum,” Yelton said. “Inside of a DAW you can have different plugins that you can buy or download off the internet. [With] these plugins [you] can make an electronic sound, you can make a bass, you can really just make any type of sounds. I like to download drum samples off the internet and play with those and [equalize] (EQ) those together and make my own drums. It kind of just goes from there, and I make my own.”

Music is a shared interest for the Yelton family, with his dad playing the guitar and his mother playing the drums. His family first started going to Lollapalooza in 2014 as a family vacation and have been going ever since.

Wendy Yelton first bought her son a launchpad, a grid device for Ableton Live that allows the user to launch sound clips like drums and mix music, along with Ableton Live and a computer upgrade for his 13th birthday.

“I was excited from the start to see him take interest in something that his dad and I really didn’t know much about. I’ve seen a steady improvement in the work that Ben has done in the last two years — his composition skills improve all the time,” Wendy Yelton said. “It’s been especially fun recently to hear him expand his work and start creating almost atmospheric pieces that give the room a whole different feel.”

[quote cite=”Ben Yelton”]I guess it can be taught, but the creative process [is hard to teach], so you just have to learn as you go.[/quote]

While Ben Yelton said a project usually takes about four hours to complete, sometimes he spends an extended amount of time working on a song until he is satisfied with the finished product.

“I try to [go in open-minded most of the time], but sometimes I really want to make a certain type of genre or a certain sound. I feel like the best ideas come from just going where you think the song needs to go,” Ben Yelton said. “I don’t really judge [my music] by how long it takes, it’s really just what comes out of it. Even if I’ve had this thing that I’ve worked on for a certain amount of hours or I’ve known that I’ve been putting so much work into [it], I still have to put that aside because at the end of the day, it’s not about the amount of… time you put into it, it’s the end product.”

He uses plugins within Ableton Live, like Massive and Serum, which both allow the user to alter the wavelength of sounds. Even though he has been producing his own music for a while now and knows these programs well, he said it was difficult for him to manipulate the technology to create his own music at first.

“It was definitely a really hard learning curve. When you first start out you don’t really know what you’re doing, and you don’t really know what you want to do. I guess it can be taught, but the creative process [is hard to teach], so you just have to learn as you go,” Ben Yelton said. “It took me a long time to get to a point where the technical aspects of making music wasn’t holding me down anymore [in] at least getting part of an idea down.”

Unlike some parents who force their children into a specific profession, Wendy Yelton is open to her son’s interest and potential career in music.

“I would love to see him pursue a creative career. I think he could have a real future in audio production. I definitely can see him working in a studio though, focused on a project,” Wendy Yelton said. “He is an intense and perceptive person. I think those characteristics could be helpful in the production of a musical score or soundtrack.”

While Ben Yelton is currently interested in becoming a DJ, he is leaving his options available for whatever his passions are in the future.

“I definitely want to do something with music, but I don’t want to limit myself to [that]. I generally just want to do whatever makes me happy, but at this moment it’s music,” Ben Yelton said. “It’d be really cool to do something [in that field] because to me it doesn’t really seem like a burden to go make music, you know? It’s just really fun to me.”

All photos by Grace Vance

Do you make music? If so, what kind? Leave a comment below!