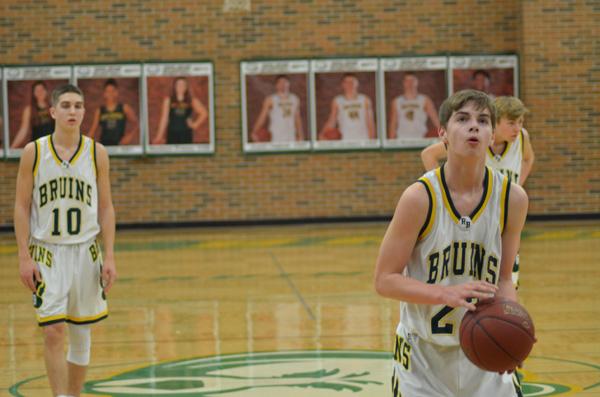 The RBHS boys’ basketball ended the regular season yesterday, Feb. 24, with a victory against Helias Catholic High School (HCHS). Leading comfortably all throughout the game, the Bruins ended 71-56.

“Tonight our main focus was playing good solid defense and just simply being the toughest team on the court,” sophomore guard Ja’Monta Black said. “Our team motto is the toughest team wins, and that’s how our minds [are] set in every game.”

With only 2:37 left in the first quarter, the Bruins led 19-12 and by the end they were still leading 21-19. Sophomore guard Isiaih Mosley was able to help keep the Bruins above HCHS, leading the team with eight points.

“Our defense again was pretty good tonight,” senior guard Justin Hajicek said. “Offensively we have a lot of weapons, but it’s our defense that determines whether we win.”

The Bruins kept their energy up during the second quarter; with 4:31 left, RBHS led 28-24. At halftime, the Bruins were able to score 10 more points to the scoreboard.

With three minutes left in the third quarter, both teams gained points, but RBHS still led 47-37. Both offense and defense were able to kept the Bruins from being beat by HCHS, with the third quarter ending 55-37 in RBHS’s favor.

“In tonight’s game, our defense led to our offense,” senior forward Jacob Lambert said. “From steals to out-rebounding Helias, we were able to make our offensive presence noticeable. Even though we had an overall good game, we had too many turnovers by being too loose with the ball.”

Never faltering, the Bruins were able to hold their defense in the last 56 seconds. RBHS scored three points for the final time, eventually defeating HCHS 71-56. Successfully ending the regular season with a 19-4 record, the Bruins are now preparing for districts on Mar. 2 against crosstown Rival Hickman High School (HHS).

“We need to improve on not making simple mistakes. It’s not the other team that is causing it, it just mistakes that we make ourselves,” Black said. “Me and my team’s goal is winning districts. Us sophomores really want it bad for the seniors. So we are going to play as hard as we can to get it for them.”

How do you think the Bruins will fare come time for districts? Comment and let us know.