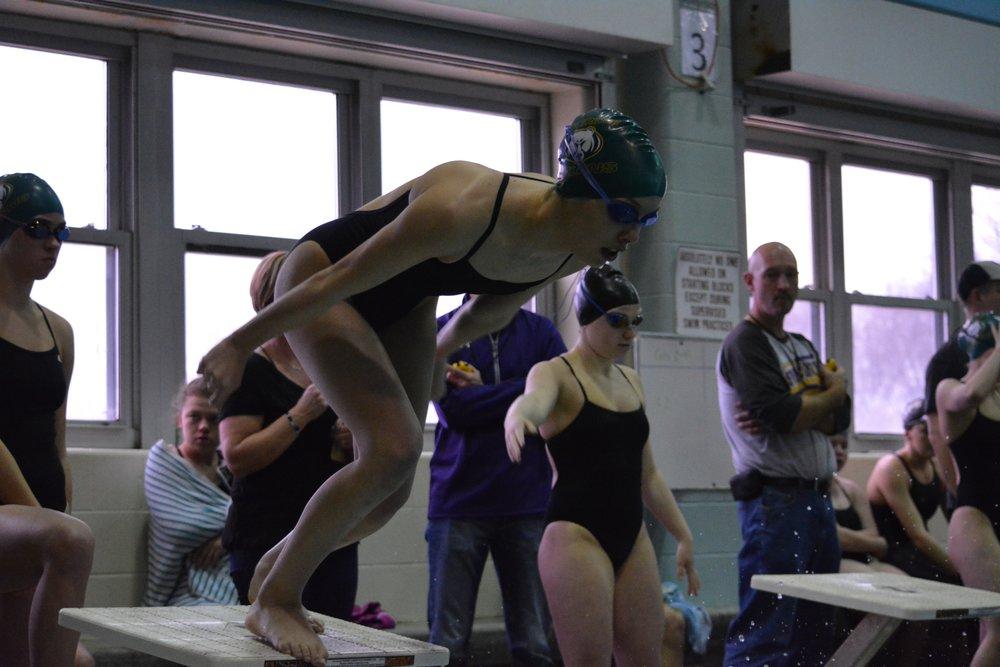 By a mere three-and-a-half points, Lafayette High School denied the RBHS girls’ swim and dive team the chance at a historic three-peat. Although the team battled a variety of new challenges this year, the Bruins still emerged with several records and second place.

The blame can go anywhere for the girl’s narrow loss. The team’s traditionally weaker relay, the 200-yard freestyle, reached a new low as it failed to qualify for the championship final. Junior Nicole Williams cites that the team’s lack of divers and sprinters was also responsible.

“We also just aren’t a team of sprint freestylers, which is what you need for the relays. Lafayette’s team was made up of freestylers; they had two in all the major free events,” Williams said. “There’s also just the fact we had such a small roster. So I guess it came down to we had some really tough and large competition.”

For every returning member of the team, this is their first state championship in which they did not emerge as the champions. For the past two years, a stacked squad paved the way for victory, but in the 2016-2017 season, the Bruins had to manipulate a much smaller squad of only nine swimmers.

“It was very different. This was the first year we really had to compete to win. In the past we’ve been able to just kind of show up and win- but this year we all had to show up and perform,” Williams said. “Honestly, not winning is way different than I imagined it being. I’m so incredibly proud of the team; we all did our part and had some outstanding swims.”

Although no new banner will join last years in the gym, the girls were able to keep up some traditions of excellence, most notably in the 100-yard breaststroke. Four swimmers from RBHS qualified for finals in the event, including freshmen Reagan Richards and Ellie Peery. Williams and her fellow junior Ellie Zweifel placed first and second, respectively, and Williams did so in record-breaking fashion, with a scorching 1:02.79.

“The 100 breast is an event where Rock Bridge has a huge opportunity to score points, mainly because we have multiple fast breaststrokers who are able to place in the top 16,” Richards said.

The team fared very well outside of the breaststroke event. Senior Ellie Flanagan took home third place in the 100-yard butterfly and finished in a solid eighth place in the 500-yard freestyle. Junior Bettie Logan also snatched a third place spot in the 100-yard backstroke and tied for fifth with a 24-second flat 50-yard freestyle. Zweifel pumped out swims with a brutal back-to-back triple of the 200-yard freestyle relay, the 100-yard backstroke, where she placed sixth, and the 100 yard breaststroke. Zweifel, Logan, Williams and Flanagan were all also a part of the gold medal-winning and record-breaking 200-yard medley relay.

“We’ve had our eye on that one for a while and knew it was totally doable. That was the most exciting to break since it was at the beginning of the meet and I hope it set a tone for the rest of the meet,” said Williams, who placed second in the 200-yard individual medley said. “I also broke my old 200 IM and 100 breast records from last year, which was just fun to do again.”

After the Bruins’ sweep of the breastroke, they were in the top spot in terms of points. The girls knew they needed to touch the wall in third place or better to win the championship. Williams described an intensity like none other, a worry so powerful that she and her teammates were moved to pray to God for help when the swimmers walked out to the block. These powerful, talented athletes cheered for their teammates, only to look up at the scoreboard and see their prayers had been left unanswered, as the relay touched in fifth place.

“Oh, man. It was hard. We all just kind of looked at each other and hoped it wasn’t true,” Williams said. “It was a pretty quick turn around though, we all fully knew going in that this could happen. We didn’t want to be the sore losers and cry over second place which is still really good. We all knew that every single person gave it their all, so it was hard to be too dissatisfied.”

What do you think of the Bruins’ performance? Leave a comment below.