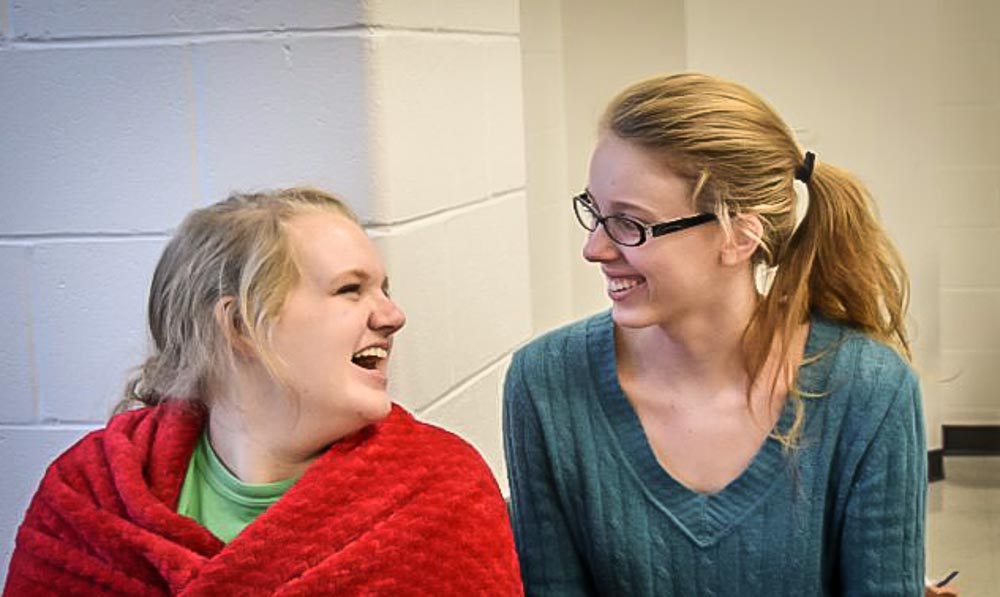 When junior Hannah Evans looked to her side during a rehearsal of the Emerald Regiment’s 2015 field show, “Story of My Life,” she noticed junior Cami Kudrna across the field and made eye contact with her.

“While Cami and I were kneeling, we tried so hard not to laugh. She had spit from her flute running down her leg, and for some reason that was so funny to us,” Evans said. “When we got up, we marched the rest of the show next to each other and my shoe was untied.”

When Evans and Kudrna halted their march as the band made a heart shape, Evans kicked off her shoe and marched the rest of the show.

“For some reason it was so funny to us,” Evans said. “At some point [after that] I realized my shoe was untied so I just kicked it off in the middle of our run. Cami and I could not stop laughing for the rest of our show. Even our marching director was laughing.”

Evans believes her most memorable inside joke was “a stupid one” but hilarious at the time. Though they were already good friends, it brought her and Kudrna even closer. The shared experience just added to their bond.

Inside jokes come in many forms. There’s the relatable meme, the awkward memory or the constant roast-joke of a close friend. Whatever the kind, inside jokes bring together two or more people.

At any time, a fond memory of something funny that happened can surface and change a bad day to a better one. Inside jokes are meant for humor, and that’s just what they accomplish, like with the unkempt laughter during Evans’ and Kudrna’s marching experience. Inside jokes, like when sophomore Preston Martin tried to flirt and failed with his pick up line or when junior Janylah Thomas’ friend thought her brother was a parrot, strengthens relationships and bonds.

As for Evans, her inside joke was about dedication. She and Kudrna fought through a bad run with humor, and it became an important and memorable time in their friendship.

“It was just something for the two of us to laugh at and make fun of ourselves for,” Kudrna said. “Our stupid inside joke is ours, which makes it so great for us.”

Moments like Evan’s flying shoe during a serious moment are what strengthens friendships. According to www.helpguide.org, laughter creates intimacy between two people, and can help solidify their relationship for the future. A shared laugh between two people establishes the foundation for a strong bond, even if the initial meeting was awkward. Humor smooths out this awkwardness as it did for Martin when he attempted to charm a girl he liked.

“I tried to flirt and I failed,” Martin said. “She said I was cute, and I got too excited in the moment that I said, ‘You’re cutier’ instead of ‘You’re cuter.’ It was a stupid typo, but she laughed and thought my awkwardness was ‘The ‘cutiest.’”

Martin’s typo sparked a connection between him and the girl, freshman Sami Alexander, that they still bring up now. It made the conversation flow and kept them talking for hours on end.

“We still bring it up now in everyday conversation,” Alexander said. “It’s something that, when it’s said, brings back good memories of the beginning of our relationship and carried [us] into the present.”

Inside jokes often start at the beginning of relationships and go back all the way to the beginning of mankind itself. Humans have been laughing as a form of nonverbal communication for centuries, and apes copy this behavior by producing a non-threatening noise to companions. Laughter truly is the best medicine, shown with a study of hospital patients who proved that watching comedy videos results in not needing as much pain medication as they would if they didn’t. Inside jokes bring back this happy feeling without needing to make new jokes.

“Humor, especially inside jokes creates something for all people to look back on in fondness,” said relationship therapist Theresa Gibson, Ph.D. “A relationship without humor doesn’t allow room for fun. If you don’t laugh while with friends or a significant other, you’re wasting your time.”

Spending time with friends allows for jokes to be made, and thus happiness to follow. As happiness is a memory inducing emotion, these moments allow for the same feeling in the future due to the remembrance. For Thomas, the happiness brought back from the past it what keeps her friendship strong.

“When I see my friend, Kayla, I remember the joke that started our friendship, and I know that will always be something we share,” Thomas said. “When she first met me she thought my brother was a parrot when he was yelling, so now when we’re together she says, ‘Is that a parrot?’ and we laugh everytime.”

Humor boosts retention, so these happy memories are sure to bring contentment for a long time. When laughter is intertwined with events, the events become prominent as they are tied with emotion. The stronger the laughter, the stronger the memory.

“[Our inside joke] is something I’ll remember for years to come,” Martin said. “It’s something special that only [Alexander] and I share, and no one can take that happy memory from us. It brings us closer, and I’m forever thankful for that stupid typo.”