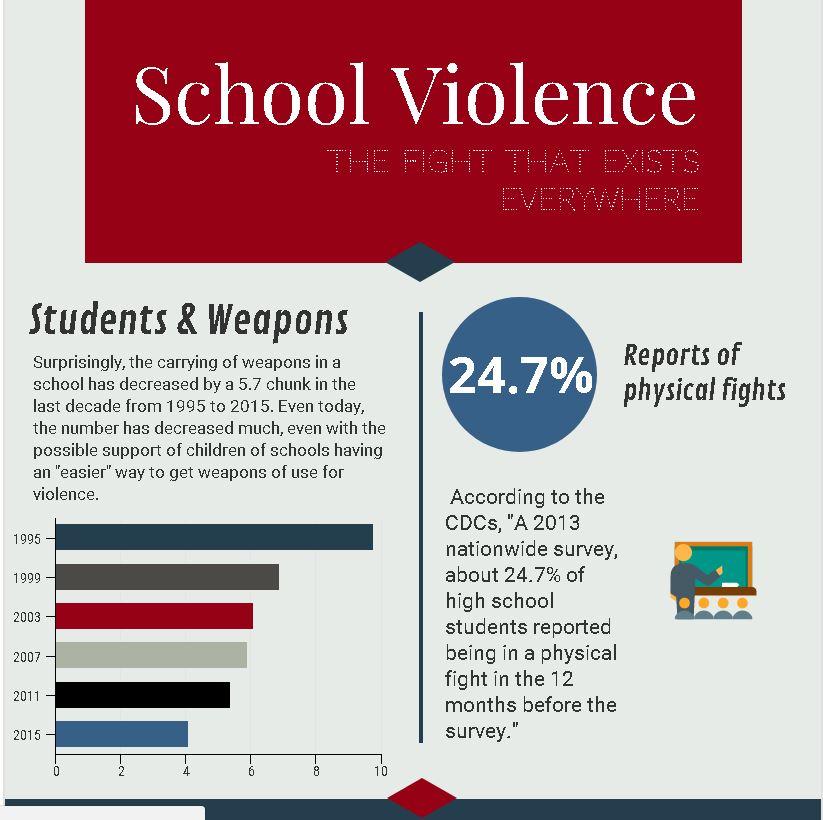 The shot of a gun, punch of a hand, cut of a knife, or even a hurtful Twitter post, can be the cause of big or small violence situations, even possible Rock Bridge. Many students of all schools are definitely currently facing the violence as shown through bullying or physical fighting as it can be present in any school. Violence exists everywhere and within every age, but it’s unexpected when a cause or victim of violence is caught within school doors. There’s endless ways it can start, but a there’s only a limited amount of ways in which it can be stopped, but from there, it’s seldom if it will be gone for good.

Violence is a massive and common topic across the country, according to the National Center for Education Statistics, or NCES, 65 percent of public schools recorded one or more violent incidents in the 2013-14 school year. The violent incidents amounted to an estimated total of 757,000 violent incidents resulting in a rate of 15 crimes per 1,000 students.

In schools it is important to have someone who can monitor and control this like Public School Resource Officer Keisha Edwards who works in the eighth biggest Public High School in Missouri, Rock Bridge. Compared to the data showing the amount of violent incidents that schools recorded across the United States, Edwards’ thoughts about the amount of fights that have occurred in Rock Bridge seem to be a tremendously small number that is apart of such a big total of violent incidents as Edwards explains.

“In regards to fights I think this year we’ve had three or four fights here, and that’s pretty average when you are dealing with young adults,” Edwards said. “Their brains are not fully developed into who [they are], and you see the first option that comes to mind is to fight because you start to weigh out your options and normally you take fighting off the table and you result to more, to different options like, ‘Ok I just want to avoid’.”

Edwards’ thinking is correct, according to the University of Rochester Media Center (URMC) a teens rational brain isn’t fully developed until age 25 or so. Using good judgment on situations develops in all ages and stages of life, but the ability to use it correctly or in the right way is the challenge for anyone.

“In teen’s brains, the connections between the emotional part of the brain and the decision-making center are still developing—and not necessarily at the same rate.” URMC said. “That’s why when teens experience overwhelming emotional input, they can’t explain later what they were thinking. They weren’t thinking as much as they were feeling.”

Edwards’ dedication to her job ensures that she does her best to keep all staff and students of the school safe which also leads to many friendships built along the way because of the connection created between herself and the students. To Edwards, the friendships in her job are almost as important as anything else that she may participate in doing in school because the learning environment and experience of Rock Bridge is key to ensuring that students can be at their best during their last years of childhood.

“I am just a liaison between the police department and the school. So, my job here is to build relationships, that’s first and foremost,” Edwards said. “I’m an officer, and so I will have to make an arrest, but what I try to do and what the school tries to do, because it’s a collaborative effort, is to not make so many arrests because you don’t want to be arresting young adults for felonies in things that could impact or affect the rest of their lives.”

As well as Edwards, Dr. Tim Baker, assistant principal, must check that the school stays safe and prepared for any violent issues that may or have occurred within the school. According to CNN, nearly a third of the world’s mass shootings occur in the United States, but some shooters are still students of grade schools, one who targets their own school with a gun or any weapon that they can get their hands on.

“To me, it’s all backwards. We do 10 fire drills a year and two A.L.I.C.E drills. We should flip flop that, but we have to do what we are told and the state mandates that we do ten fire drills a year, so we do,” Baker said. “I think we should do a lot more of them and I think it’s the best, most important drill we have. There hasn’t been a death in a school from a fire in over 50 years in the United States, not one, not a single death, but we continue to practice fire drills like you’ve never done them before.”

The A.L.I.C.E drill, Alert, Lockdown, Inform, Counter and Evacuate, seems to be a very important part in schools in ensuring the safety of students across the country during the five of their days a week spent in their school. Safety and Security director of Columbia Public Schools John White thinks that CPS is doing a great job in planning and performing their safety drills and will continue to make it a priority.

“I think we are way ahead of a lot of school districts,” White said. “The law only says that we have to drill with our employees…we have taken it upon ourselves to include students in our drills. I think then drills will be important for students not only while at school but while they are out in the community. “

Freshman Caroline Schade also agrees that there are ways for prevention of violence such as fights. She isn’t apart of fights in her school, but does notice how they affect the students around her.

“I think the school does a good job of handling it. There are tons of students at our school, so of course it’s impossible to assist all of them, but we have amazing staff that have the knowledge and experience to handle these situations in a fair and balanced manner,” Schade said. “They understand what it’s like to be a high schooler and do a great job at taking control and lending a helping hand to those who need it.”

Like Baker, White agrees that the drills are necessary and that CPS is still doing a good job of including them when really they are not required of students to practice them just because they help for anywhere they might go also outside of school.

“The causes of any violent act can vary greatly,” White said. “I can’t tell you that one thing causes violence more than any other. I would say that a lot of the issues I deal with start or revolve around social media. Either someone threatening others or fights that get started because a post or a comment that was made on someone’s twitter, facebook or Instagram accounts.”

Through the actual fights, the Centers of Disease Control and Prevention mentions: “Youth Violence typically includes persons between the ages of 10 and 24, although pathways to youth violence can begin in early childhood.” Edwards’ thinking seems to add to this in saying that it’s important of how to handle this situation punishment wise.

“What we try to do in this learning environment is to teach you, to teach you that your mistakes,” Edwards said. “that your behavior has to change, to educate you to prepare you for the world, not to say “we’re going to stop your progress at 16 and 15 years of age in life, you’ll never be anything” because the idea of education is to give you the knowledge and the tools that you will need to succeed in life, not to take away from you.”