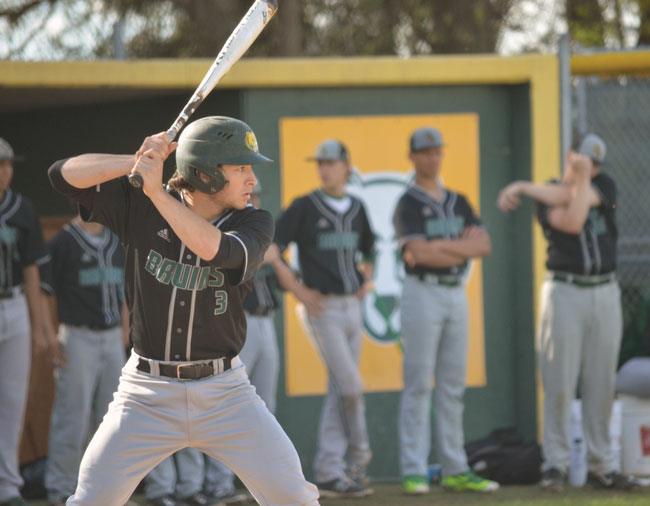 [dropcap style=”flat”]T[/dropcap]he baseball team began its season with an even 1-1 record March 17. Although the Bruins lost their first game to Grain Valley 7-4, senior pitcher and first baseman Jack Widhalm lined a walk off double to left field wall against Cape Notre Dame in the seventh to end the game at 4-3.

In the first game against Grain Valley, however, Widhalm felt disappointed with the results, especially after leading their opponents by one in the second frame. Grain Valley would turn the tide by scoring five runs in the next half.

“The first game we didn’t play as well as we wanted,” Widhalm said. “It was definitely a learning experience for us as far as how we need to approach and play the game.”

Senior and catcher JP Schneider felt similar, citing one of the specific obstacles he fought with in his first game of the season.

“I think the biggest problem I faced [in] the first game was trying to get my pitchers the strike calls that were close and framing the pitch so it looked like a strike,” Schneider said.

As the game against Grain Valley was the first of the season, head baseball coach Justin Towe isn’t too worried about the rest of the season despite some glaring mistakes.

“We weren’t very sharp, I guess, and in really all areas,” Towe said. “In pitching on the mound, we had too many walks. [We] made a couple of costly errors, both mental and physical, and we didn’t have a very good approach to the plate … but it was the first game.”

In the next game against Cape Notre Dame, the team fared much better, despite facing last year’s Class 4 state champions. Towe attributes it to having experienced their first game and using it to their advantage.

“We had a lot of guys that were [excited about] getting out there with their uniforms and getting to play a real game,” Towe said. “After the first game, they had a game under their belt and could take a breath, pause a little bit and regroup and go back to playing baseball like they played for some time. When that happens, the game slows down a bit, you’re able to focus a little better, focus on the play and look for better pitches to hit, focus on pitching and throw more strikes and just play a better game overall.”

Coming out of the games against Grain Valley and Cape Notre Dame, Schneider takes note of specific areas he believes the team and himself needs to improve upon.

“There are many things that we can improve on, but I think the biggest things that we need to work on are limiting walks, getting ahead in the count while pitching and just limiting the errors we make in the field,” Schneider said.

Towe agrees with his senior catcher, stating that any step forward will serve them well in their future games, including one on March 22 against district rival Sedalia Smith-Cotton.

A Dog’s Purpose can still be a good movie