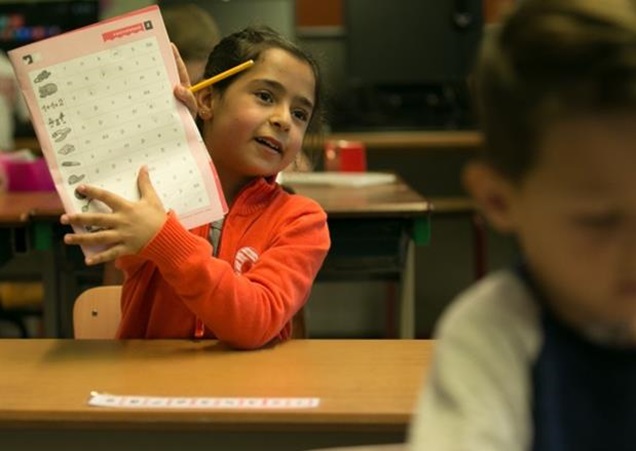 The first and final scenes of Miss Kiet’s Children are identical. The only difference between them is that during the closing shot, I felt sadness that such a joyful and beautiful movie was coming to an end. This film touched the heart in unexpected ways. When one hears the premise of refugee children learning a new language in Holland, one expects tears, trauma and seriousness.

The opposite of this could not be more true. More often than not the audience was laughing out loud at the children’s antics, and the film showcased the beauty of learning in such a tumultuous time.

The Syrian children the film meditated on were as bright and joyous as any American Disney star. They fought, laughed and loved like every other child. Scenes of classroom tomfoolery brought these children close to the heart of the viewer. As their school year progressed, the children communicated in more Dutch than Arabic, and I, a viewer, felt pride for these kids.

Often, one could almost forget that these kids are refugees. The children’s time in a war zone and their escape are barely touched on. While some may see that as an erasure of their story, I perceived it as the emphasis of their lives. The point of seeing these children is not to have a morbid fascination for suffering, but to give hope for the future.

While Ms. Kiet is rarely seen above the legs, to mimic the children’s sight, she deeply inspires. The focus of the movie was her children, but through their growth one person’s caring and patience can be credited. This celebrates not just one teacher in the Netherlands, but all of education and child care. Through the personal investment and love the film garners for the classroom, a viewer can barely walk away without hoping the best for these children.

Miss Kiet’s Children is surprising stunner. The comedy carries the film and creates a deep love and hope for these children and every other of the millions of displaced children in the world. The film offers a joyful look into lives so often defined by their trauma and is essential to understand and appreciating the role of education in moving forward.

Exciting aspects of Russian society revealed in ‘The Road Movie’