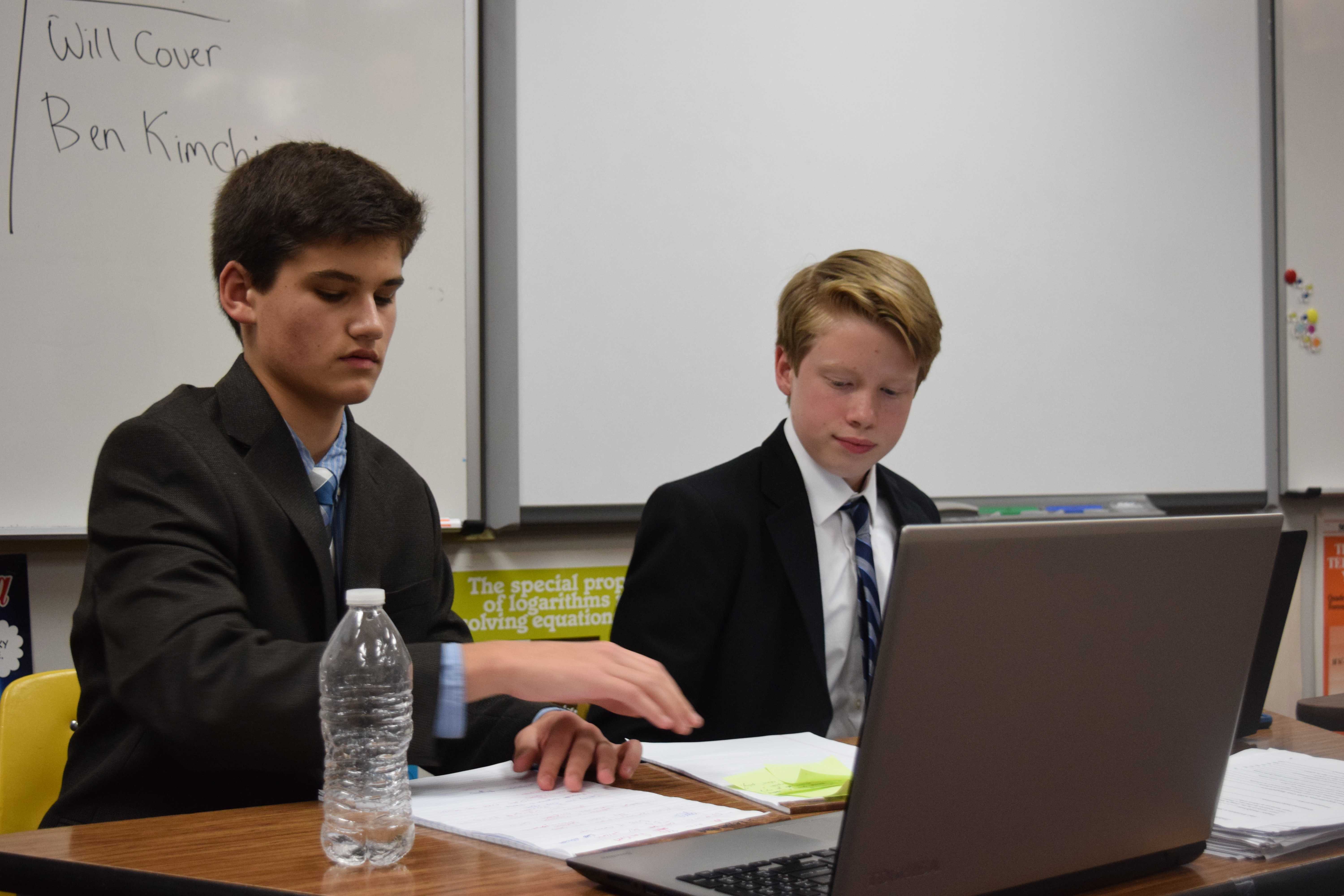 A number of students placed well in both competitions; seniors Rebecca Wells and Chase Ford, juniors Kristine Cho, Hannah Potter, Laith Almashharawi, Sidharth Kuttikad, Sonya Hu and sophomore Sarah Emerson will advance to the MSHSAA State tournament on April 21 to 22 at Missouri State University. Additionally, Ford, Hu and freshman Will Cover qualified at the NSDA tournament for the national competition that will be held in Birmingham, Alabama in June, teacher sponsor Benjamin Niewoehner said. For those who qualified in NSDA, they were shocked at the results.

“[I was] surprised. A lot of people go their entire high school career without making it so I’m really thankful,” said Cover, who qualified in Domestic Exempt. “I think I also got really lucky with stuff, like I just got super lucky with the questions I drew. They weren’t super difficult and it was something I could talk about, so I was grateful but I recognize I was lucky about it and [I’m ending] a lot of people’s careers.”

Hu, who is also one of the debate team’s co-leaders, said that although she was surprised at the result, she is excited to be able to go to nationals in her junior year. Preparation for both NSDA and MSHSAA districts didn’t differ too much, she said, but emphasized the importance of getting ready more for NSDA.

“We definitely did put a lot more weight into it because NSDA qualifies you to nationals rather than state, and this meant we put a lot more work and a lot more emphasis on the preparation that was required,” Hu said. “We did a lot of tweaking on our cases based on the feedback from MSHSAA districts, since that was the weekend before.”

Hu explained the preparation process further, saying it is an intense method but has certainly paid off.

“Before every tournament, we set it up so that you have to complete a workshop, which means you need to present your piece if it’s IE or if it’s a debate, you do a practice round,” Hu said. “We ensured that they would have a qualified judge to give them good feedback, so that would be a chair of the event and one of the coaches and this allowed the members to have better preparation overall at districts.”

Emerson qualified in Domestic Extemp and Policy Debate, a first for her at MSHSAA districts, leaving her pleased despite the worriness she had earlier about the event.

“It was pretty good. It was a little stressful because of the small amount of teams, which increased the competition,” Emerson said. “In Extemp, it was my first time going into Extemp at MSHSAA districts, so that was kind of nerve-wracking, but otherwise it was just like another tournament.”

Although it was “just like another tournament,” Hu said that because it was a district tournament, most members put forth more work into preparing, like she and Wells did for the event they qualified in, Public Forum debate.

“We did extensive research — at the end, I believe we had 150 or so pages of just evidence pieces,” Hu said. “We did try to do a practice round against [other debaters] so we would all have practice before going into MSHSAA districts where we’d actually compete, and eventually I guess all the preparation paid off.”

Her coach, Niewoehner, certainly thinks the preparation did.

“In preparing for MSHSAA Districts, the team continued to stick to this commitment in addition to a significant amount of personal time on each team member’s part outside of the regularly scheduled meeting times,” Niewoehner said. “Each team meeting was run efficiently with the debaters, assistant coach, and myself critiquing performances in an effort to provide helpful feedback for improvement. It was this willingness to participate and fully engage in preparation for Districts, which made the overall result a success.”

Lady Bruins take victory in sectionals match up against Lebanon