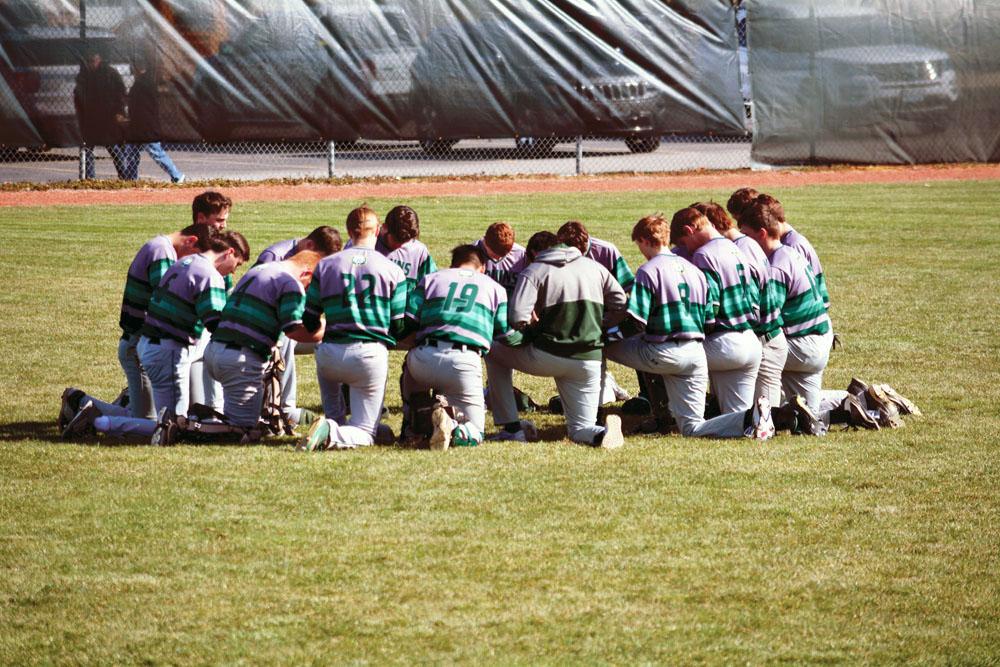 A thick blanket of chlorinated air covers the RBHS girls’ swim team. The back-to-back state champions are looking for a miracle, or at least third place in the final event, the 400-yard freestyle relay. Without cinching that win, the Bruins could kiss their three-peat dreams goodbye.

As the relay squads were ready to walk out, anxiety and intensity enveloped junior Nicole Williams. Hoping for her team to bring home gold, she looked past her coach or her personal athletic prestige; she looked to her God for help.

“This wasn’t the first time I’d asked God for help, obviously. I pray every night before I go to sleep and before every meal. I’d been asking God for strength and energy for the entire team to do well at state for about a month before it happened,” Williams said. “So when they were walking out, I just grabbed Ellie Zweifel’s hand and asked if she wanted to pray with me. I just asked God to help the relay to hone the talent He gave them, said a quick Hail Mary and that was that.”

Williams isn’t the only athlete to bring religion and sports together. The two experiences are irrefutably intertwined in American culture. Famous athletes like Tim Tebow exercise their faith in a very public way, and roughly half of Americans believe God has a hand in choosing who wins the Super Bowl. Williams does not believe that a divine power determines how she swims; she knows that is dependent on her own practice. But her strong religious convictions have inspired her to remain faithful, even as she competes.

“I grew up in a very religious family, so ever since I can remember I’ve been praying every night before bed,” Williams said. “So when I started swimming, I guess it was just really natural to ask for help before meets. It’s not like meets are the only time I talk to God, it’s just that sometimes athletics are part of my conversation with Him.”

Athletes besides Williams are also having these conversations, even if they are not precisely the same. Senior Moiz Muhammad has played soccer and ran track in his high school career. As he has competed, his Islamic faith has helped to guide his choices. He credits some of his hard work to wanting higher powers to “see him hustle,” but his religion has also bred in him the character of a true sportsman, relying on himself to help his team and to never ask for others to fail.

“Religion really humbles you and causes you to pray for your individual and team success and not for the failure of others,” Muhammad said. “This really helps focus one’s self during a tense match, as you are concerned about yourself.”

But even as his religious beliefs have helped him grow as an athlete, they can at times add an extra burden to practice. For one month out of the year, Muslims must fast from dawn until sunset. This is difficult enough for any person, but given the caloric needs of an athlete and outdoor practices, Muhammad has learned to balance fasting and training.

“Coaches are pretty lenient whenever fasting coincides, so it makes it a lot easier being able to take breaks whenever,” Muhammad said. “It’s mainly just having to power throughout but also make sure you are still safe. Working out and running are harder to do during the day, so I usually save that type of thing for early in the morning or at night.”

Despite some challenges, Muhammad especially appreciates prayer before competition as a moment to slow down and reflect. A few fields away, the RBHS baseball team takes that same moment to reflect with a group prayer before games.

“It’s a moment of reflection and slow down, a time for them to press pause because everything is going pretty quick at that point in time,” head coach Justin Towe said. “Obviously they’re praying, but I don’t know that it’s necessarily always a complete religious piece; I think a lot of times it’s kind of a press pause piece.”

Towe said the practice of praying before games emerged organically, and it is by no means required of players. While he acknowledges that prayer in a school or athletic setting is controversial, Towe attests there has never been a complaint made about the team’s tradition. He believes the issue has been exaggerated in a negative way, especially considering how recent in memory prayer in schools was and how in other places the controversial practice still remains.

“We’ve played baseball all over the place, all over the Midwest and down south as far as Florida,” Towe said. “Sometimes we’ll play teams that are more traditional Catholic, private schools that pray after games, and they invite teams to join in if they want to, so we’ve done that before, as well. There’s never been anything about it.”

The results of those games can be the truest test of faith. Even with prayer, players are disqualified and teams sorely lose. Those swimmers seeking divine intervention at the state championship did not come with gold, out-touched by a measly second. But even with that disappointment, Williams faith in God’s will for her and her team endures.

“Oh, man, I would never be angry with Him for that sort of thing…If it does happen I’ll pray on it again and ask him to help me avoid similar situations in the future,” Williams said. “I guess I just don’t see it as a big thing. I know some people may get angry with God, but I don’t see it as His fault, and I never really have.”

Free ACT may be discontinued