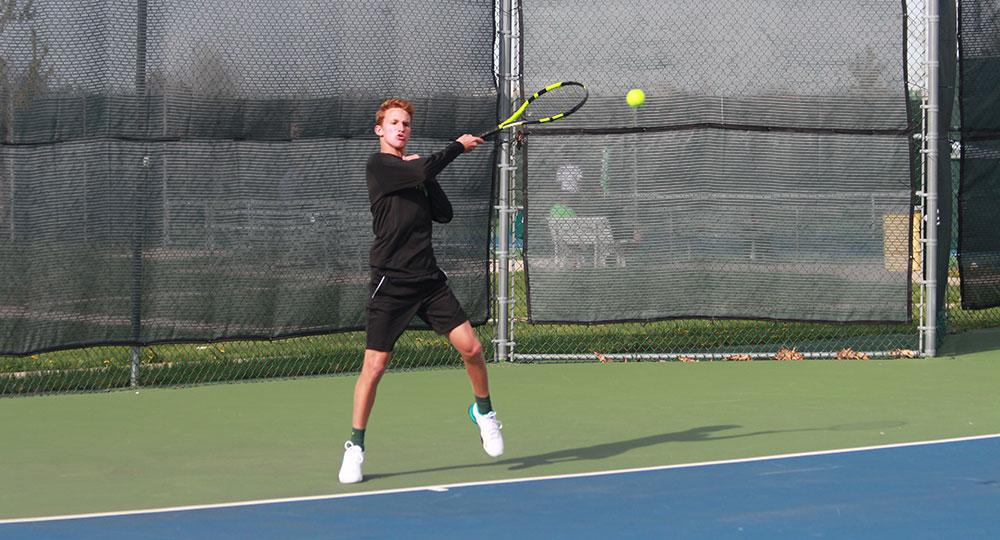 [dropcap style=”light” size=”4″]O[/dropcap]n April 14, the RBHS boys tennis team took part in the Columbia Duels competition against Edwardsville High School. Improving 8-1 for the year, the Bruins were able to defeat Edwardsville 6-3, which allowed them to move on to the next duel against Blue Valley West High School.

Later that afternoon, the team emerged victorious with a 5-4 win, which secure a 9-1 record for RBHS on this season.

“What led us to a win in both duels yesterday was our depth as a team, and our resilience to not give up even in the tough times of our matches,” sophomore Zach Greuber said. “We fought hard and stayed strong enough to fight through the matches and get the desired outcomes.”

Sophomore Kavin Anand explains the duels as three doubles matches and six singles matches. Each win is considered one point and the first team to get five points wins the duel. Anand beat his opponent in all four of his matches, 6-0, 6-0, 6-0, 6-2.

“Today we were up against some big competition and as a team we dealt with the pressure well and were able to perform,” Anand said. “We beat the former Kansas state champions 5-4 so that was big for us.”

Although the Bruins were proud of the outcome of the duels, sophomore Jake Fraunfelder says they are not done. The team wants to accomplish another duel win to have another success under their belt before giving it their all at state.

“The team played phenomenally well and really clutched when it counted,” Fraunfelder said. “I thought I could’ve played much better, but I’m glad our team came up on top.”

Before taking on the next competition, the Bruins want to learn from their mistakes and perfect their playing. Anand says that an area the team can work on is improving their competitive mindset.

“If we start to get behind in the matches the frustration becomes visible on court and I think we just have to maintain our composure a bit better,” Anand said. “This will let us perform at a higher level.”

With little time to rest, the Bruins will compete again on Wednesday, April 19. The Kansas City Plaza Tournament is another duel where they will be facing off against Blue Valley West once again.

“There’s going to be a lot of competition there,” Anand said. “We hope to do well and as always take the win.”

Students to sacrifice objects and behaviors for Lent