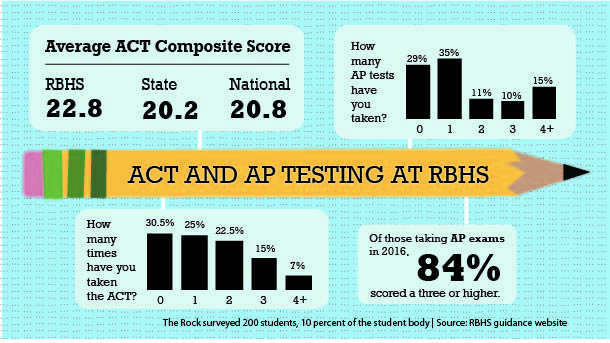 On Apr. 19, juniors will take the statewide American College Test (ACT). The pressures to do well on this exam is not in vain, because it is an important factor in being accepted into college. With just the 2016 class, 2,090,342 students took the ACT last year, according to the ACT Profile Report.   While most students take it, some high schoolers are confused on why there is so much pressure to exceed on this lengthy exam.

Admission officers decide who to accept into their school by looking at grades and either a student’s Scholastic Aptitude Test (SAT) or ACT score, said Patrick Elmore, assistant director in the office of admissions at the University of Missouri. Elmore also said that standardized tests allow college admissions officers to see how prepared students are for college.

“Colleges want you to send your scores directly from ACT or College Board because we get much more information than just your score,” Elmore said. “We receive detailed results with a student’s competency broken down by specific skills that we can use for advising. We can use the extra information to identify students who might struggle with certain classes and make sure they have the support they need to be successful in college.”

Although colleges require an ACT score from a student in order to be accepted, taking the test can become costly. The price of the test with the writing portion is $58.50, and some teens prefer to take the test multiple times to get the highest possible score, for according to the College Board, 55 percent of students who retake the SAT and ACT increase their scores.

Junior Joe Pulickal has taken the ACT twice but is not a fan of how much colleges care about ACT scores. Pulickal thinks that the ACT only evaluates how well a student can take a test and doesn’t give accurate information on a person’s full potential in school. Although not a fan of the ACT, Pulickal has to  have an ACT score to get into college.

“It is very important to my future because the ACT, is sadly, probably the best indicator of how well I can perform given a short amount of time, which isn’t ideal for many people,” Pulickal said. “Overall, colleges rely on the ACT nevertheless and therefore makes the ACT such an important test prior to being accepted into any college.”

Pulickal’s distate of the ACT doesn’t relieve any pressure that he feels because the test is one of the main factors that helps him get into his college of choice. College’s put so much emphasis on the ACT because it is used as a normalizer. According to PrepScholar, the ACT score shows admissions officers student’s academic abilities. They compare scores with transcript grades to see if grades were inflated or if classes were too hard. The ACT is also important to colleges because it allows them to be ranked. If they accept people with high ACT scores, they will more likely be in the higher rankings.

On the other hand, sophomore Savannah Wittman doesn’t mind taking the ACT because she realizes the importance of the test. Wittman believes that the benefits of the test outweigh the downsides.

“The more I take it, the more chances I have to improve my score and possibly get scholarships,” Wittman said. “I think it’s important because if you get a high enough score, scholarships from a multitude of colleges start to appear and if you do really well, say 36, a full ride is highly likely.”

While high ACT scores can lead to many college acceptances, if a student can not afford the financial aspect of college, the score can be less significant. Extending Enrichment Education (EEE) teacher, Gwen Struchtemeyer graduated RBHS in 1986 and says the price of college has increased by almost 300 percent. Therefore students feel pressure to perform well on tests to minimize costs of college.

“College has become a significant, and somewhat concerning financial investment. High ACT scores are tied to financial incentives and, as a result, additional stress,” Struchtemeyer said. “I went to a private college for about $9,000 a year in 1986.  Today, that same college is $38,000 and is, oddly, considered a good deal. [University of Missouri-Columbia] MU used to be about $4,000 a year in the 1980s; now it is $11,000.”

Not only can the ACT help pay for college tuition, but Advanced Placement (AP) tests can also lighten the financial load. AP U.S. studies teacher Chris Fischer encourages his students to give the AP test a try but also takes in account that some people can’t depending on certain circumstances such as other tests to focus on. The test is $93 but can earn a student college credit, which saves money in the long run.

“The AP Board provides an enormous amount of resources to the process.  It can be expected they must cover their cost in some capacity,” Fischer said. “However, it is an expensive exam and I certainly hope they don’t maintain such a high price to simply dissuade those not really vested in preparation.”

Wittman plans to take the AP World test in May as she wants to be prepared for college. Wittman also agrees with Fischer in that the price shouldn’t be so high.

“You pay almost $100 to take one test that lasts half a day,” Wittman said. “Some kids decide not to take it because of the price, so if if was lowered, more kids would be interested.”