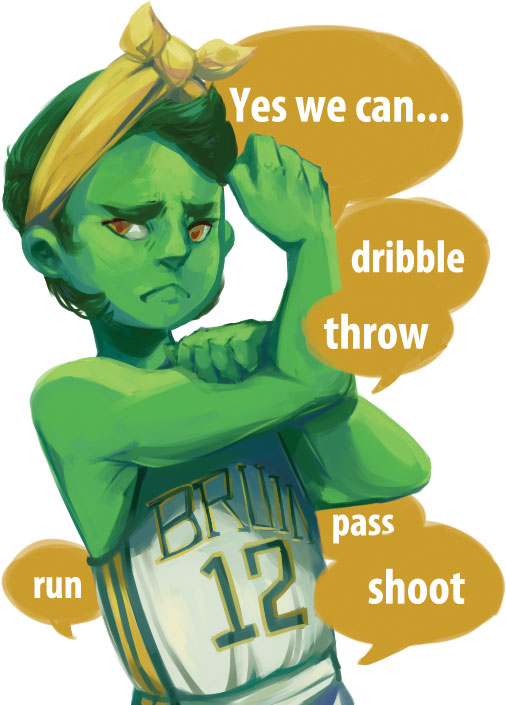 Her heart is pounding. Every time her spikes hit the track, the pain and motivation of the past season throbs in her chest. She bursts through the ribbon. She is the Lady Champion.

Well, she is a “Lady Bruin.” For some reason this victor, and every other female athlete, needs to be distinguished by their gender. The use of feminine modifiers for team names exist in almost every school and sport, but it is a useless distinguisher. All the term “Lady Bruin” accomplishes is to estrange and diminish female athletes.

Female participation, and sometimes dominance, in athletics has been slow to come. It was only until the 1980s that the National Collegiate Athletic Association (NCAA)  offered sports for women, nearly seven decades after its formation. Still, in such pinnacles of performance as the Olympics, there are barriers for women in events like the 1500-meter freestyle and the entire sport of canoeing, which they can not even contest.

Athletic traditionalists give many reasons for why female athletes get such different treatment. “Their bodies can’t handle the strain.” “It’ s tradition.” “They have no real desire for it.” These are a few and they all go back to one key idea: men don’t want to share sports equally. If someone can look at women as less than equal, it’s easier to give girls unequal treatment. This unequal treatment is why women are called “Lady Athletes” and not just athletes. By adding “lady” in front, one sends out a message that this is not a real athlete, this is just a girl pretending to be one.

[heading size=”18″ margin=”0″]Changes in the real world, both realized and deserved[/heading]

Colleges such as the University of Tennessee retracted their long-used female specifying names. The major complaint they received was that is took away a sense of identity from the girls, because if a college takes away the female specific names, the players will lose their femininity and they might not even know what school they go to. Or not. Female athletes are as crucial to any athletic program as males are, and they know that.

In 2016 the Lady Bulldogs of the University of Georgia won the NCAA DI swimming and diving title, and what those athletes did was bring a victory to their whole school, not just to the more ladylike parts of it. The aforementioned Lady Bulldogs have actually won 29 of the schools 40 national titles. Maybe instead of “Lady Bulldogs” the better name would be “better bulldogs.”

Even at the literal Olympics, the peak of athletic performance, women are belittled for their looks and ability. Their successes are also placed in the hands of men, like that of Katinka Hosszu, all because they are seen as somehow less than their male counterparts. They are just the lady Olympians.

This constant dismissal and ridicule of female heroes destroys the future of sports. A Dove study found that 6 out of 10 Canadian girls will quit playing a sport because they are worried about how it will alter their physical appearance, making them less feminine. A study by The Sport Journal showed that young female athletes are far less likely to believe that they can play in division one programs or professionally than their male counterparts.

These Lady Little Leaguers are being told everyday through the media and through their own lives that they are not the same as the boys, they are worse. The addition of “lady” reinforces to girls that they will just be girls, no matter how hard they practice.

Showing young female athletes their greatness is as simple as omitting a word. There are names of Lady Bruins such as Sophie Cunningham and Chelsea Tatlow that live in infamy in RBHS halls because of their athletic prowess. Let RBHS preserve these names live on and add many more names to this list, but let them survive as Bruins, for that is what they are. They are nothing less.

Do you believe placing “lady” in front of a mascot name is appropriate? Leave a comment below!

In a world of negativity