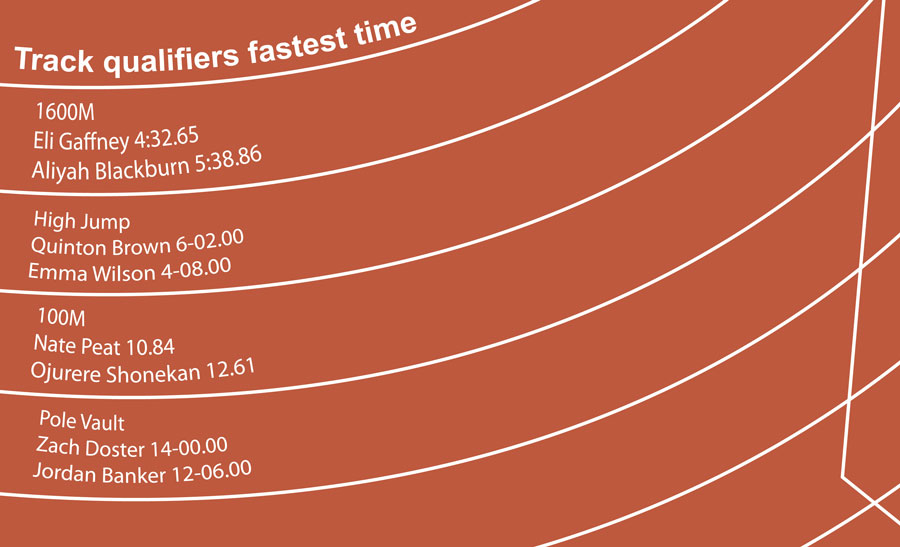 The regular season for track is coming to an end as the team heads into Saturday’s district tournament at Lee’s Summit High School.
Coach Neal Blackburn has a great amount of confidence in his Bruins’ ability to compete at the highest levels.
“Things I’ve noticed so far is a very competitive work ethic,” Blackburn said, “especially among our varsity athletes in practice and on meet day.”
Blackburn says a core group of female sprinters, namely seniors Ojurere Shonekan, Elle Brown, Delaney McDannold and freshmen Mya Drayton and Ellynn Nickens should do well. He also said junior hurdler Caroline Stevens along with vaulters senior Jordan Banker and junior Morgan Banker and middle and long distance runners junior Katherine Dudley and senior Aliyah Blackburn show potential for moving past districts.
Shonekan, who has run track since her freshman year in high school, said one change this year is her sister, Faramola, has not played the instrumental role she had for the past three years, since she graduated last year.
“She was my rock,” Shonekan said. “I could always count on her to cheer me on in a race, even if we weren’t getting along. I didn’t realize how much I took that for granted until state last year after we ran our last 4×400 together.”
Blackburn said the boys’ track team looks equally strong and points to sophomore sprinters Nate Peat and Martez Manuel, and seniors Noah Boyles and Rilwan Ibitoye to advance. Sophomore vaulter Eli Darrough and senior Zach Doster should also perform well, along with sophomore throwers Melvin Drayton and Marcus Manuel.
“These are just a few of the folks,” Blackburn said. He said distance will hold its own with the likes of seniors Eli Gaffney, Adam Sandstedt and Nick Wright, juniors Dean Frossard and Kylan Rottinghaus and sophomore Mojuba Shonekan.
Mojuba Shonekan, who has participated in track & field since he was in fifth grade, went to districts as a freshman and hopes for a repeat performance.
“I’ve been preparing for districts very aggressively. At this point in the season, there isn’t time for mistakes,” he said. “I’ve been making sure that all the workouts that coach gives me are on point. I don’t try and be too slow or too fast, just stay on. Consistency is crucial in this point of the season.”