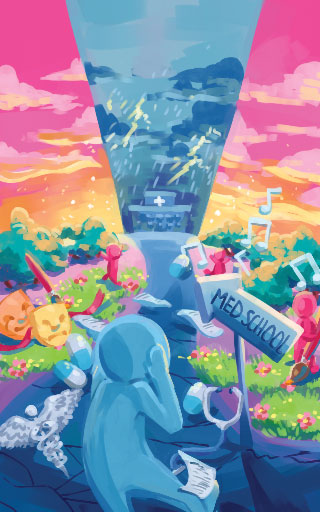 Once in a while comes along a bright-eyed child who breaks a knee in kindergarten and decides to make it a life goal to become an orthopedic surgeon. Through the course of her education, she stacks her schedule with biology classes and spends her weekend cooped up at lab internships. Medicine is all she ever wants to learn about.

So why is it that a student so completely and utterly devoted to the sciences should have to spend hours on an essay analyzing King Lear’s insanity or learn how to sketch houses for the sake of that fine arts credit?

It’s a frequent complaint high schoolers make. For some students, the future has already been narrowed down to the finest detail. Classes irrelevant to their career seem useless, and specific credit requirements are a hassle.

Before passing around the petition, however, one should carefully analyze the actual benefits of an open style curriculum versus a core curriculum, which has credit requirements.

In the United Kingdom (UK), general education requirements did not exist until recently, when the UK fully implemented the National Curriculum after students began specializing in subjects too early.

Before the National Curriculum set core subject requirements for each grade level, schools gave considerably more freedom over course load, which led to a great deal of students dropping fundamental subjects such as science, math and language early on.

According to a report by Ofer Malamud of the University of Chicago, individuals who specialize early are more likely to change to an unrelated occupation later on. Switching, in turn, causes students to lose skills in both the subject they were formerly specializing in and the knowledge they missed by dropping other courses.

As a student in the United States, it is easy to take for granted the structured curriculum. While certain classes seem useless at times, a core curriculum requirement provides students with interconnected knowledge and a wide selection of skills that will open up career options.

Plus, colleges appreciate students who demonstrate hard work and critical thinking throughout all sorts of academic areas. Admissions want students who are worldly and well-rounded, which a system with general education requirements would be more likely to provide.

As a student under a core curriculum, explore other subject areas while fulfilling those credit requirements. Branch out and connect ideas between courses. Instead of taking classes directly related to an interest, apply that interest to different subjects. For example, a science lover could write about recent medical research for a journalism class.

Although an open curriculum may provide early specialization, a core curriculum instills students with the critical thinking skills and wide spectrum of knowledge to navigate any possible career. Take advantage of a core curriculum and don’t see it as a chore.

School system evolves as perfection is not yet achieved in education