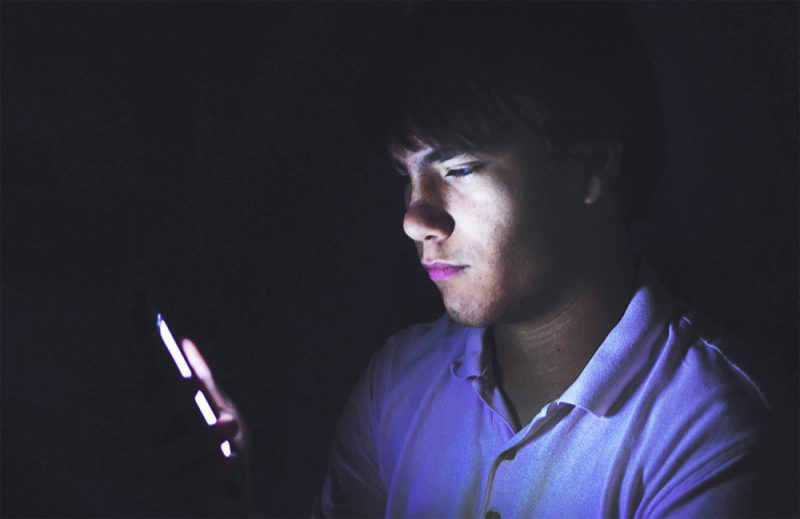 Sophomore Harper Dailey stands in line at the cash register, waiting for the customer in front of her to finish checking out. Dailey pulls her phone out from her back pocket, happy to find a text from her friend, which she replies to immediately. She then goes onto Instagram and scrolls through her feed, a task she is naturally inclined to do while waiting in public places alone.

“I like to use my phone when I don’t know anyone in a social situation, like when I go into a store alone,” Dailey said. “Having my phone definitely gives me comfort in those situations: I can just scroll through Instagram when I’m feeling awkward and if I don’t know anyone.”

Dailey is part of the 92 percent of teens the U.S. Pew Research Center found to use their phones often throughout the day. However, new findings say people who use their cell phones excessively could experience more psychological health issues than those who use their cellphones less.

According to a 2015 study released by researchers from the University of Illinois at Urbana-Champaign, people experience more symptoms associated with depression and anxiety, along with elevated levels of stress, when they used their cell phones more often.

Participants in this study were asked to write down an insecurity that made them uncomfortable, which was then collected under the false premise that psychologists would review them for a training exercise. The participants were then split into three groups: one group with access to cellphones, one group with no cell phones and the last group had access only to computer games. The results deduced those with no technology were 64 percent more likely to experience anxiety. In spite of the data, those in the cell phone group that were not anxious used their phone the entire waiting period. The experimenters concluded phones act as a “security blanket” or a device with “unique comfort” that could temporarily distract users from anxiety and depression-like symptoms.

The conclusion made perfect sense to Tayana Panova, an alumna of the University of Illinois Urbana-Champaign and researcher at Ramon Llull. Panova Though, she wonders one thing that wasn’t tested: are phones the cause of the anxiety and depression-like symptoms?

“There is not a consensus about whether technology use leads to anxiety or depression… We don’t know if a user’s existing mental distress leads to higher tech use, if higher tech use contributes to the development of mental distress or if there is a cyclical relationship,” Panova said. “In my view, it is likely a cyclical process because having some kind of psychological vulnerability or need/desire that the smartphone can satisfy, logically leads to the using of the smartphone more in order to satisfy those needs/desires.”

World Studies teacher Shawnna Matteson, who’d heard about some of these findings, sees cell phones as a tool people should use in moderation because, at the end of the day, she believes personal connections with others is more important than anything in the virtual world.

[quote]“[From what I know] Technology use really shouldn’t be more than an hour a day. That [going] beyond that you are removing yourself too much from personal relationships, and although you might feel fulfilled… you’re not getting your social interactions that as humans we’re conditioned to need,” Matteson said. “With personal experience, when I start really struggling with depression and anxiety, I withdraw, and the more I withdraw into my phone or the computer, I withdraw from everyone around me.”[/quote]

Both Matteson and Panova agreed that people who use their phone frequently do not experience enough intimate relationships with the people around them, which, Panova says, leads to bad habits and experiencing symptoms like those linked to depression and anxiety. This conclusion makes Panova wonder why people see their cellphones as a better alternative to making conversation with others.

“If we are defining better as ‘healthier,’ I would argue forming interpersonal connections and having experiences with other people and/or engaging in private self-reflection are much healthier activities than playing CandyCrush or scrolling through Instagram…” Panova said. “However, if by better we mean why the phone is preferred… I would argue the phone requires the least amount of emotional and cognitive investment from the user. A phone does not require a response, a facial expression or an actively running thought process. It provides stimulation instantly without the need for the user’s feedback… This kind of provider/consumer relationship is easy and entertaining and therefore rewarding.”

As a consumer, Dailey enjoys the benefits of having a passive relationship with her phone, like Panova mentioned. Dailey, however, knows her limits when it comes to how long her phone should be at the center of her attention.

“Using my phone to text my friends is pretty important to me. If I have homework and I don’t know when it’s due or I have a friend in a different class that I want to talk to, I can just easily send them a text,” Dailey said. “People with anxiety use their phones more probably to keep themselves occupied. When I’m feeling anxious, I take out my phone to distract me. It’s completely fine as long as it isn’t detrimental and cause [someone] to withdraw further from conversations.”