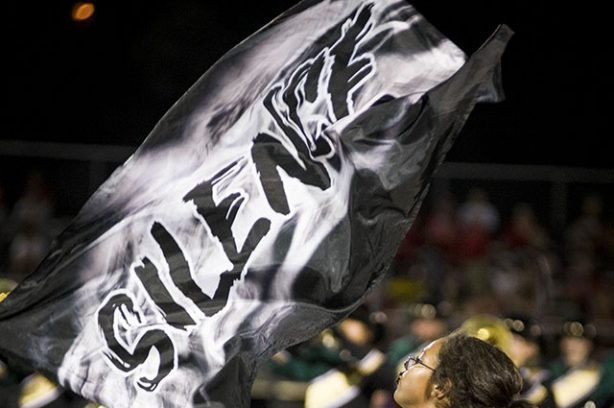 In the final movement of the Emerald Regiment’s 2017 field show, “Why So Blue?,” students remove their hats, take a breath and sing. Many members sing with all of the emotions they are carrying inside of them. They sing using the pain and sorrow as well as the hope and freedom that life brings.

And they will sing that song for the last time of their competition season tomorrow, Saturday, Oct. 14, at the University of Missouri’s Champion of Champions contest.

As sophomore Jaime Crites sings, she has thought back on trauma she has faced, and she said the show’s message of hope and community allowed her to deal with the emotions it caused.

“I think when I was maybe eight [years old] my mom tried to commit suicide,” Crites said. “I was at home by myself with her. She tried overdosing on drugs while I was there, and at the time I didn’t think to call 9-1-1, I just kind of called my grandparents.”

Her mother was helped in time and is still alive, but she said the show has helped her to handle her emotions because “it doesn’t end on a ‘blue’ note.”

“It’s giving me a more better understanding of how they can be sad and it feels terrible,” Crites said, “And how if you have enough people to encourage you and, you know, be with you, then it’s  gonna be all right. It makes them pretty much feel a little bit better than what they were [before].”

The idea behind “Why So Blue?” came after band director Patrick Sullivan brought up the concept of a “blue” show during a staff meeting. He said at that time he never planned on the message connecting so strongly with band and audience members alike.

After the show’s theme was decided, the design team, composed of drill writers, concept designers and instructors, then polished and perfected it until they had a clear picture of how “Why So Blue?” would look. This process was especially difficult because, Sullivan said, this was the first show during his time here that the marching band had incorporated a period of complete silence during the show. He said it was an enormous visual risk because of how raw the emotion on the field would be because of the lack of music, but the staff believed the Emerald Regiment would be able to handle this challenge.

“Our philosophy behind selecting shows is always number one: audience members are the students,” Sullivan said. “They have to have a quality musical experience.”

The musical and visual aspects of the production were created to be both challenging and rewarding for students, while also allowing for a message to come across from the band to the audience, he said. Though the show had a concrete theme, Sullivan and the rest of the design team, did not plan for it to have only one impact on the audience; rather, he wanted to leave the show open to interpretation.

“We wanted a simple message of, ‘If you are feeling down, there are other people that are around you that can pick you up,” Sullivan said. “We wanted people to take away with, ‘Okay, I don’t have to be blue all the time.’”

Though “Why So Blue?” is about feeling down and out, the show avoids graphic representation of sensitive issues so it can remain accessible to audience members who have dealt with mental illness so it doesn’t trigger a negative response, as well as those who have not.

Because “Why So Blue?” was open to interpretation, onlookers could take away any number of messages from watching it. For senior Hannah Evans, the show’s idea of community is one of the most important. She believes the show’s inclusion of vocal and instrumental soloists as well as a dancer illustrates how depression and other mental illnesses don’t single out individuals. Such issues, she says, can affect anyone, anywhere. To Evans, a drum major and member of the flute duet alongside Kaitlyn Smith, the story of “Why So Blue?” is not an exact replication of what depression looks like in all cases, but rather a broad representation of how mental illnesses could manifest.

Evans says the theme presents a more general message about dealing with mental illness rather than as a direct expression of how such issues present themselves on a case by case basis.

“I think that my one message is, don’t take [the show’s message] personally if it does not replicate what you have gone through,” Evans said, “just realize that we are trying to generalize [mental illness] and make it aware to the public.”

Audience members can interpret the theme using a broad spectrum of emotions and past experiences, which allows them to connect on some level with the message of hope shown throughout the show. To sophomore Samantha Fierke, the vocal soloist for the Emerald Regiment, the theme of “Why So Blue?” resonated with her on a personal level.

“Me, myself, having dealt in the past with several different mental illness and kind of that ‘blue’ feeling of almost giving up, that down and out,” Fierke said, “It’s nice to have that feeling recognized and even represented in something that connects to me as much as band.”

For people dealing with mental illness, everyday activities can be daunting, and the lack of control over one’s own thoughts adds an additional challenge.

“I think the most important idea from ‘Why So Blue?’ is that everybody has not only bad days, but bad times,” Fierke said. “It can be really hard to wake up in the morning and go to school or to work or wherever you have to be that day and do what you need to do when all of these things, these thoughts that you can’t control are pressing down on you.”

Fierke believes the progression of the Emerald Regiment’s field show illustrates how a sense of belonging can help to make individuals feel less isolated during their “blue” times.

“After a while [mental illness] is something that you can overcome, that everybody can overcome with the help of others as well as with your own thoughts and your own control,” Fierke said.

Not only has the show’s theme connected with people who have dealt or are dealing with mental illnesses first hand, it has also touched those who have seen what these issues can do to those they love, and  anyone was able to reach anyone else who has ever felt “blue.”

“I don’t know if I can speak to what’s going on right now in the country, what’s going on now with current events,” Sullivan said. “But I will say that the show is open-ended enough for people to take away a positive, powerful message. Whatever depth or whatever level they want to take away from that, we are happy to provide that for them.”

Take paper out with the trash

This show was really well done, at almost every performance I saw parents/people in the stands crying. Congratulations on such a good season!