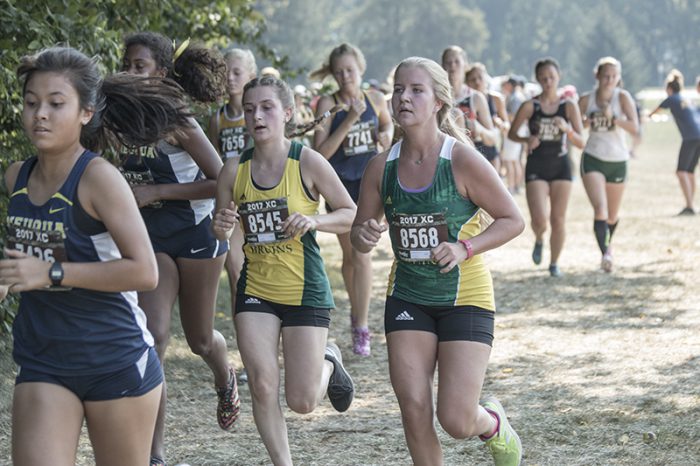 Friday, Oct. 13, the cross country team set out to St. Charles to compete in the last meet of the regular season, excluding districts which will take place next Saturday.

Out of 14 teams the upper junior varsity (J.V.) boys placed second and the girls took sixth out of 18 teams. The head coach of the team, Neal Blackburn, believes the meet went well, especially since only one varsity boy competed.

“The meet is an opportunity for our non-varsity to compete against varsity teams in order for our underclassmen to see how it feels as they hopefully move up into varsity in their forthcoming years,” Blackburn said.

Although varsity members of the cross country team did not race, Blackburn said the placings seemed to be right on par with how the team has performed throughout the season, as the team has placed satisfactory in the majority of their meets. For junior Beni Adelstein, who placed 16th for individual girls, her goal for the season was to run a personal best, which she was able to accomplish.

“I’ll miss the people and the fun parts,” Adelstein said. “[Although] it’s nice to be finished with cross country because I have more time now for other things.”

On the other hand, senior Alex Geyer is not completely finished with the season as the other top J.V. boys and he will run at least another week at the open race during districts and possibly sectionals, he said.

“The end is near for me,” Geyer said. “As a senior I will miss being on the team because some of my best memories during my time at RBHS have stemmed from [cross country].”

Although the season may be getting near its end, Blackburn believes the Bruins have the most important weeks of the season ahead of them. The journey for the [cross country] team has had its ups and downs, Blackburn said, but day in and day out the team’s work has been as good as any team he’s ever coached.

“My expectations are always very high and Dwe won’t really know if those expectations are met until we complete our season,” Blackburn said. “All I can ask is that we perform near our potential and run for each other.”

How do you think the RBHS cross country team did this season? Let us know in the comments below.