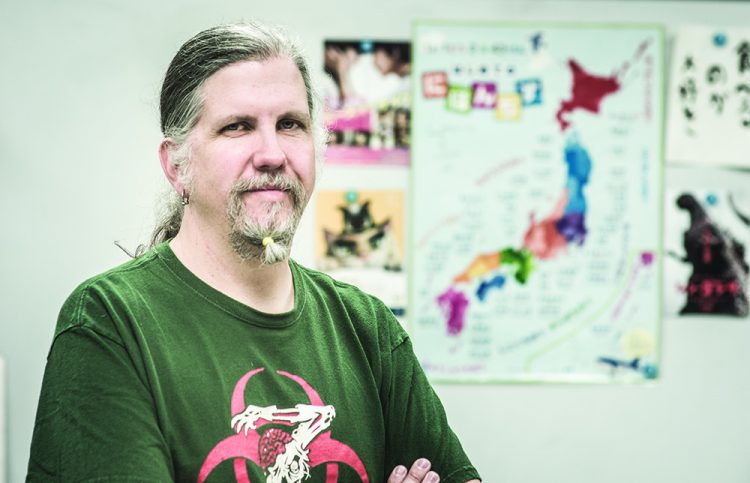 Columbia Public Schools (CPS) administrators and faculty members have created a committee to save German and Japanese programs following the district’s April 2017 decision to phase the classes out of high schools.

A need for the committee, which superintendent Dr. Peter Stiepleman created, rose out of dissatisfaction and confusion among students and parents over the decision.

Those involved in the committee meet regularly and have formed subcommittees in order to figure out a potential solution for saving the programs, which they will present to the Board of Education and Dr. Stiepleman in November.

Japanese teacher Shawn Beatty is on the subcommittee in charge of coming up with an alternative on how to offer the classes.

“[One option] is distance learning, like the language lab we have. It could be blended learning, or we could change the format of the schools. We were told anything is possible, for now, and then we’ll narrow it down to what we actually can do,” Beatty said. “Kids will not be enrolling in the classes. It’ll be taken out of the course book; if there are changes to the format, that will be put in the course book before they enroll.”

Although nothing is definitive, the language cuts have already had an effect on students’ learning. Sophomore Alex Fritschi takes German 4, but his class is merged with two other levels. In addition to German 2, 3 and 4 being grouped into one class. German 1 is only offered online. This will likely cause enrollment for the class to drop, which will signify to administrators that the class is okay to cut. The muttled communication from the district has caused German and Japanese students and their parents to be proactive.

“I have attended two school board meetings. [The School Board members] certainly know that people want to keep German,” Fritschi said. “We’ve had, like, 12 people come up and speak at the Board meetings. Now they at least know there is some resistance, but I don’t think it has changed any of their minds much.”

Fritschi and other students may feel as if the board of education is indifferent when it comes to the future of the language classes, but Board member Christine King assured that she and her associates try to hear out everyone, even if the final decision turns out to be unpopular.

She explained low enrollment was ultimately the deciding factor in this case. Records show for the 2016-2017 school year, 46 high school students in the district enrolled in German 1, 11 of them from RBHS. 69 CPS students enrolled in Japanese for that school year, with 35 from RBHS. The committee working to save the classes has suggested enrollment trends over multiple years be used to decide whether or not a language continues to be offered at schools. For the current school year, 27 RBHS students had signed up for German 1, and 17 RBHS students had signed up to take Japanese 1.

“The district and the Board of Education have a balancing act to manage the fiscal responsibility and the allocation of resources with courses and offerings it can make available,” CPS Community Relations Director Michelle Baumstark said. “It’s never an easy decision. The fact there is a work group to consider anything beyond the complete phase out of the languages means [the Board is] listening to all voices.”

In addition to attending Board meetings, students and parents have been posting on a Facebook group titled “Keep Japanese and German in CPS.” The group has 502 members who update each other on news concerning the programs. Aside from being unhappy about the general decision to cut the language classes, students and their families are also upset because of what they see as a lack of communication from CPS. Beatty said the language classes were on the 2017-2018 course registration guide, and he spent two nights last January promoting Japanese to incoming freshman, so the decision to cut German and Japanese that came only three months later was a shock.

Dr. Stiepleman tweeted in April that letters would be sent home to students regarding the decision to cut German and Japanese, but students say they never received the letters.
Sophomore Crystal Odor is in Japanese 2 and was affected by the lack of communication.
“The school district hasn’t been doing a very good job of keeping people informed on the decision. They claimed to have sent out letters to students and parents informing them that German and Japanese classes may not be offered in the future. This was not the case,” Odor said. “I only heard about it late last year. I’m glad classes are planned to be phased out rather than cut outright so kids already taking German and Japanese can continue, but I can’t help but think the decision seemed to come out of the blue.”

“Parents received those letters. I’m not sure where the communication came from that we would send enrollment information directly to students and not parents,” Baumstark said. “Information and official district letters are always sent to parents. Students are minors. They were also posted online and provided to media outlets as requested.”

This is not the first time an incident like this has happened. In July of 2015, former Superintendent Dr. Chris Belcher announced German, Japanese and Latin would be phased out of middle schools, but teachers were later approved to purchase new textbooks and materials for the 2015-2016 school year.

German teacher Alison Kaiser is unsure as to why that is; her guess is that whoever decided to cut the programs did not communicate with the person in charge of authorizing textbook purchases, and that the decision for the programs was made suddenly, after teachers had already been using the new materials for almost two years.

Another puzzling element, Beatty said, is that students were allowed to enroll in the language classes in February of 2015, even though classes were going to be cut. While the board of education had a say in both the 2014-2015 and the 2017-2018 decisions to phase out the classes, it is unknown whose idea it initially was, even to school administrators.

“I can’t really say [whose decision it was to phase the programs out beginning 2017-2018]. I know who told me to communicate it, but I don’t know whose decision it was. In general, we’re told that the cabinet makes these decisions, so that’s Dr. Stiepleman and the assistant superintendents,” principal Dr. Jennifer Rukstad said. “At RBHS we did our own communication, but I believe there was communication that came from the district. At best, it was kind of disjoint, so I don’t know that it’s necessarily been a coordinated process in terms of communication.”

Kaiser said she learned of the decision to phase German classes out from Dr. Rukstad last April and that no one else in the district ever contacted her. Sophomore and Japanese 2 student Aaron Hill is disappointed in how the district has communicated the decision and has since been active in trying to get the programs back. Hill has attended multiple Board meetings, during which students have the chance to speak about their discontent with the situation.

“The school board has handled this very poorly. I respect the members of the school board, and I understand that they have many things they have to do. It’s a complicated situation, but the way that they have done it is very untransparent. It’s very jumbled and disorganized,” Hill, a sophomore, said. “Every month, we ask them if they have sent the letter they supposedly sent, and every month they say yes, but every month, they haven’t. They haven’t even gotten a formal letter out to people who want to join Japanese or German that those classes are going to be cut. That is not organized or transparent at its best.”

Despite students’ feeling as if they’re not truly being listened to, Fritschi likes that he and his peers have the opportunity to take important problems to the board of education. He encourages other students to explore the idea if they have broad school-related issues.

“This is just in general, but I’ve found that if you have an issue, it’s alright to take it to the School Board as long as you have some support among your peers. Talk to your teachers about it; see if any teachers or parents are also willing to help,” Fritschi said. “It’s not as hard to get a meeting with the Board as I thought. So just make sure to state your mind if you have a problem. The meeting is a little boring; it’s a lot of people in charge talking, but it’s good to say what you want and try to solve the issue.”

Students should avoid goofing off, give teachers respect

Why did the classes need to be cut in the first place? Is it simply a funding issue, or was there some other problem that forced CPS to cut classes?