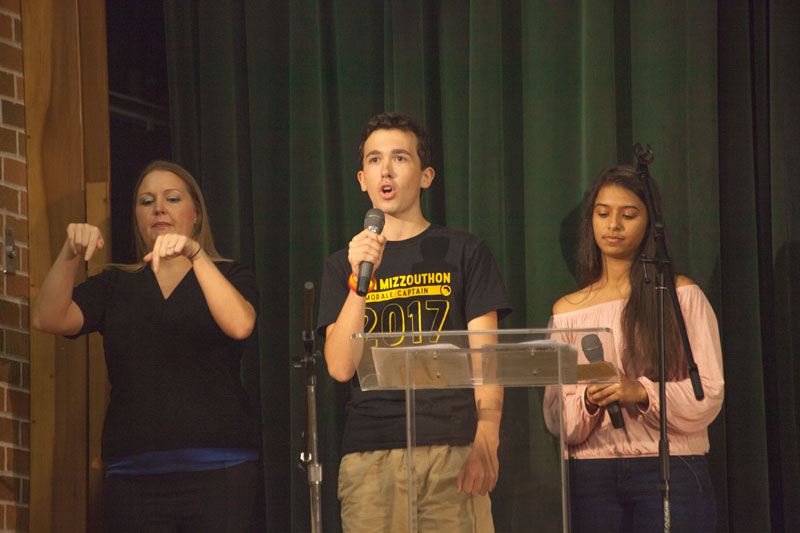 When he was 18 months old, senior Connor Squellati mastered the art of drawing a circle. He found permanent markers around his house and drew circles on any surface he could discover. Squellati drew the shape all over his sheets, crib, walls and body.

Now, Squellati uses this innate determination to help others and succeed in his own passions. One of the main projects Squellati’s determination goes into is his presidency of National Honor’s Society (NHS), RBHS cross country and his leadership role in the RBHS club and local organization, “Mizzouthon.”

“I wanted to do something to provide support for [children] and their families,” Squellati said. “After learning more information [about Mizzouthon]. I signed up to be a RBHS Morale Captain my junior year for the high school branch, MiniMizzouThon.”

Although Squellati got involved with Mizzouthon at the end of his sophomore year, he has had connections with the Miracle Children in the program since middle school. His mother, Nancy Squellati, recalls her son always caring about moral and ethical principles and always standing for what is right.

“He was the first [in a room] to hug,” Nancy Squellati said. “First to smile. First to run to help someone. First to gently care for animals. He was always putting others first. He is able to connect with people from so many lifestyles and so many backgrounds and literally identify with how they see the world around them.”

While Squellati finds it easy to sympathise and connect with people, he has also become more direct since the beginning of high school, senior and longtime friend Ilinca Popescu said. He’s more willing to speak for himself and his beliefs and is less concerned with catering to others if it gets in the way of doing what’s right.

“Connor, as a friend, has rubbed off on me, I think,” Popescu said. “He’s been willing to criticize things that I’ve done in the past to my face, and it’s provided me with useful self-reflection that has changed how I act around others.”

Outside of his selflessness to others, Connor Squellati also specializes in the arts. He participated in band throughout middle school and most of his high school years and plans to attend into Drum Corps International (DCI) in the future, despite the heavy financial cost. DCI is a branch of competitive marching bands for after high school and is the highest level a marching musician can achieve.

“I became interested in DCI freshman year when I was thrown into the marching program at RBHS,” Squellati said. “I wanted to be able to perform in front of a large, supportive crowd as a way to improve as a musician and a leader.”

Connor Squellati was part of the RBHS Emerald Regiment for three years, becoming a section leader in the front ensemble for two of them. His main instrument is the marimba, though he plays all percussion as well as the piano, which he taught himself how to play. Connor Squellati dedicated six years of his life to band, and in the eighth grade he started to transpose music. By freshman year, he had composed a few classical pieces. Connor Squellati also became an apprentice with the Missouri Symphony Society in percussion. Nancy Squellati remembers her son’s time in band fondly, as it was one of her favorite activities to watch him do.

“Band was his outlet to playing daily, as playing for him was much like how people naturally take a breath,” Nancy Squellati said. “When Connor played in the front ensemble, he was in his element. Although his capabilities stretched further than what he was contributing, his main goal was to lift his fellow peers to show them what they, too, were capable of.”

In order to reach even higher playing abilites, Connor Squellati said practicing has become a daily regiment for him in order to be in a DCI front ensemble. Connor Squellati will be competing in late Nov. against hundreds of auditionees with the same dream as him, although because Mo. has little to no exposure to DCI, Connor Squellati has relatively no experience with what it really takes to make his dream come true.

“I’ll be competing with others who do have experience [with DCI, and that’s scary to know,” Connor Squellati said. “Regardless, I’m still going to try my hardest and make sure my dream comes true.”

While Connor Squellati is involved in a number of extracurriculars, including Mizzouthon, practicing for DCI, being president of NHS, running cross country and others, he strategically plans all his activities to make sure nothing overlaps. Connor Squellati also holds equal obligations to all of his activities.

“Unlike many would suspect, I actually thrive off [of] being busy,” Connor Squellati said. “Yes, there are times where I might have a lot of deadlines to meet between academics and extracurriculars within the same week, but I know how to manage my time and prioritize what I personally find important. Emotionally, I am most stable when I’m doing more [activities]. What others see as chaos, I see as balance.”

With his drive to succeed and a full calendar, Connor Squellati has flown through his high school years but is ready for new opportunities. He is beyond dedicated, Nancy Squellati said. With a busy schedule both inside and outside of school, he still takes his coursework seriously. This determination is what keeps Connor Squellati moving forward, from circles on walls, to fighting for a spot on an international drum corps.

“I’ve always been one to dream big, to give it my all,” Connor Squellati said. “Everything I do is for a reason, and I will forever strive to make an impact for the future.”

Hooves to my heart: once in a lifetime friendship