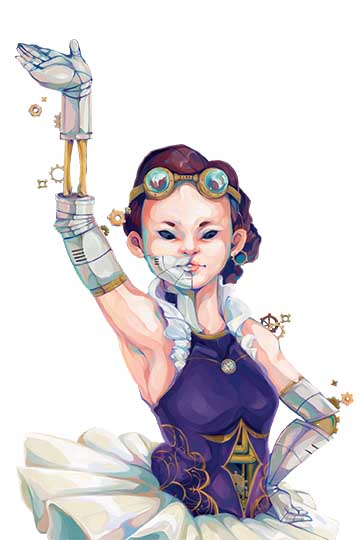 In 2016, senior Cassi Viox traveled to Guatemala for the first time in 10 years. Previously, she went to the central American country to adopt her little sister, though Viox was young and didn’t fully understand the weight of what she was doing. As time passed, however, Viox learned more about the dangers for women in poorer countries and knew the potential she had to make a difference.

“I saw some of the [danger] victims when I went [to Guatemala] in 2016 and realized that my work in Guatemala is more meaningful than something to write about in college essays,” Viox said. “It was devastating and captivating. It took over my entire heart and mind and made me change the course of my future.”

Despite the hard work she puts in when she visits Guatemala by carrying rocks up and down a mountainside, visiting public hospitals with no funding and seeing people about to die that have no healthcare, Viox cherishes the moments and  opportunity she has to make in the country.

“Despite the awkward or uncomfortable times, though, [the hard work] is rewarding and makes the time down there be treasured,” Viox said. “The weeks I spend there don’t necessarily go fast or slow. It’s more about savoring the sweet and bitter moments so I never forget why I care about the place.”

[quote]“The weeks I spend there don’t necessarily go fast or slow. It’s more about savoring the sweet and bitter moments so I never forget why I care about the place.”[/quote]

Among some of the sweet moments Viox experienced in Guatemala was when she interacted and talked with the kids in the youth group. Seeing the love the kids had for each other was an amazing moment for her, she said. She wishes that time would have stopped to have more of a chance to savor the now bittersweet memory.

“I got to meet these kids who were love deprived and needing somebody to hold them and pay attention to them,” Viox said. “[It] was just such an amazing moment that I wish I could replay again.”

Even though time cannot literally stop, the “slow motion effect” can make split seconds feel like minutes. Neuroscientist David Eagleman has been studying this effect after experiencing the same phenomenon as a kid. When Eagleman fell, he noticed that he saw the little details of his surroundings. This experience led to him conducting his own experiment, according to National Public Radio (NPR).

Eagleman used a Suspended Catch Air Device (SCAD), which consists of a person being connected to a cable 150 feet above the ground, and free falling for about three seconds before safely landing in a net.

SCAD diving is designed to make the participant’s brain feel like it’s life is in danger, which helped Eagleman achieve his desired effect. When participants fell, they looked at a perceptual chronometer on their wrists, which quickly flashed numbers. While unable to read from the ground, Eaglemen theorized that the “slow mo effect” would allow people to see the flashing numbers in life-threatening situations.

While people felt like the fall was longer than it actually was, they were still unable to read the numbers.

“We’re not writing down most of what’s passing through our system,” Eagleman said in the NPR article. He believes that when people feel time slowing down, it is actually their memory storing all the little information that would usually be thrown out, unless in an emergency situation, where any information the brain can receive is helpful.

Junior Eleanor Fay experienced this time warp feeling when she was driving on a narrow, winding back road. Fay’s right tire caught on the edge of the road. She overcorrected into the other lane, jerked the steering wheel, flipped off the road and landed in a ditch.

“When I was rolling, time definitely stopped,” Fay said. “I was holding onto the steering wheel and it almost felt like I was frozen in that moment. Once I stopped rolling, though, time almost seemed to go in fast forward; it’s all a blur now.”

When Fay felt time stop during her life-threatening car accident, Psychology Department Chair and Associate Professor at Westminster College, Dr. Abby Coats confirmed that stress can be the cause of that feeling.

“I think [time slows] because people notice all the details when they focus on one thing exclusively,” Dr. Coats said. “[As] an active area of research, no one knows just yet. The short answer is that it seems to involve an interaction between the cerebral cortex and lower-level brain structures such as the basal ganglia.”

Allen says time slows down when people are in stressful situations because of the amygdala, a part of the limbic system in the brain which facilitates emotion.

“[The amygdala] becomes more active [and] creates another set of memories that seem to create more vivid memories,” Allen said. “So the event is associated with more vivid memories. The more memories you have for a situation, the longer it seems that it lasted. That’s why it often seems like certain situations that maybe only lasted a few seconds might feel like a few minutes.”

Despite Viox’s desire to relive her moment in Guatemala, she appreciates the continuity of time and focuses on the future.

“Even during my happiest moment, I would rather continue living my life and wait for new happy moments because there is progress that must occur,” Viox said. “Part of that progress is a zeal and excitement for my future and potential for more happiness if I keep on living and enjoying every moment I’m given.”