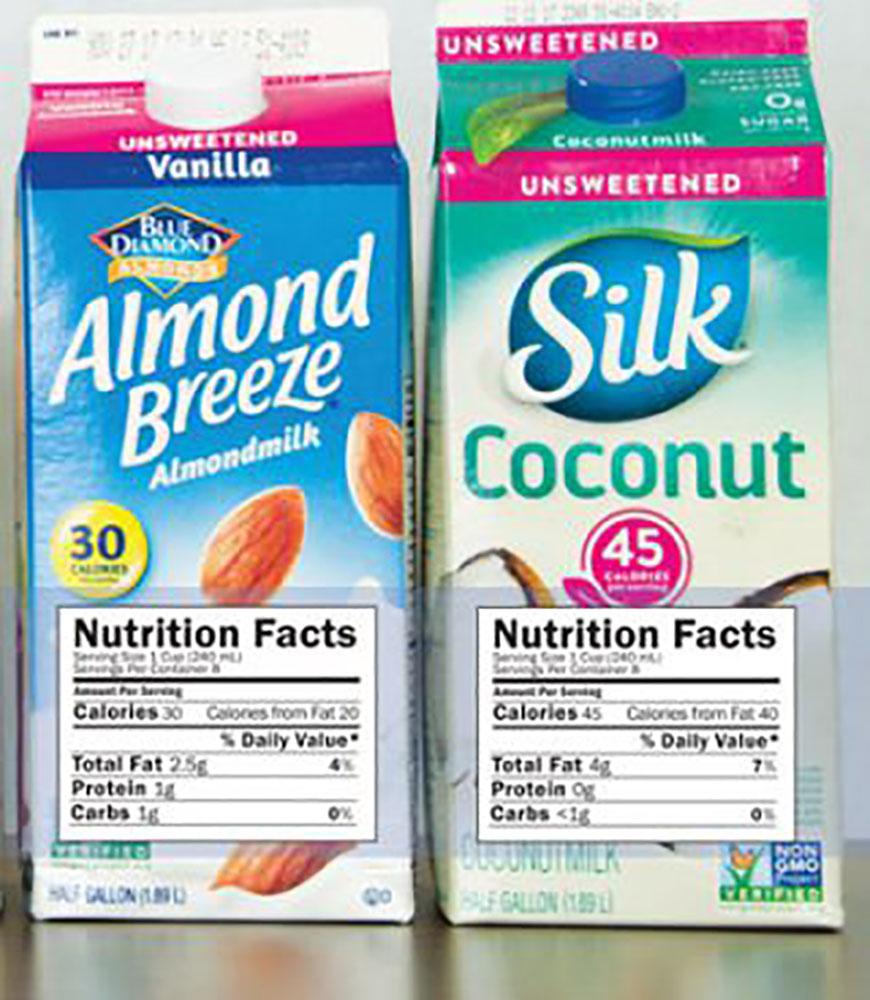 Rows of coconut, almond, soy, cashew, rice, hemp and pistachio milk fill the aisles of supermarkets across the country. Equipped with claims such as “50 percent more calcium than dairy milk,” the non-dairy possibilities present themselves as a healthy option for everyone. With such an image, it’s not hard to see why marketsandmarkets.com forecasts that the industry will be worth 14.36 billion dollars by 2022. But what does this mean for the dairy milk industry?

Well, for starters, drinking cow’s milk is losing popularity. Since the ‘70s, the average amount consumed per day has dropped from around 1.5 cups to 0.8, according to an article by the Washington Post. The future isn’t looking any brighter, either, with Euromonitor predicting an estimated two percent drop in annual sales from this point on. Still, most nutritionists recommend dairy as a good addition to any diet, including registered dietitian Allison Lesko, who works for the company Fit Flavors, which provides pre-made meals.

“As a part of a balanced diet, dairy is, as of right now, included from the Eat Right website by the Academy of Nutrition and Dietetics. We, [Fit Flavors], include dairy and nondairy products within our company,” Lesko said. “That would include Greek yogurt because of its high protein content, and that would also include almond milk and coconut milk.”

Lesko’s approach mirrors a larger acceptance of milk alternatives, with mintel.com reporting 49 percent of Americans including them in their diets. Though Lesko believes variety is beneficial, some don’t have the option of pure dairy because they don’t produce lactase, a key enzyme for breaking down the sugar found in milk. Researchers from the U.S National Library of Medicine found that lactose-intolerant individuals make up 65 percent of the world’s population. Andrew Kinslow, who is conducting research at RBHS via the Contemporary Issues in Science and Sociology class, is a part of that group. What’s more, he grew up on a dairy farm during the ‘80s, when the culture was filled with marketing about the perfection of milk as a food.

“From a purely biological sense, there really isn’t much natural about continuing to drink milk past infancy. Lactose intolerance is really quite normal,” Kinslow said. “[Dairy] can be a good addition to one’s diet if a person can tolerate it and if it isn’t to an extreme. I do have concerns about too much high saturated fat [in some] dairy products.”

Like lactose intolerants, vegans do not consume any typical dairy products. For them, however, it’s a conscious decision rather a consequence of their biology. Lesko acknowledges that choice, but also the fact that it doesn’t necessarily relate to wellness — still, some do cite health as a reason for going vegan.

“Some people don’t like dairy due to the way that the animals are treated, and therefore dairy might not coincide with their personal values,” Lesko said. “The only reason you shouldn’t be consuming dairy is if you don’t tolerate it. We never want that to happen, so that would be a point where I would recommend to a client that they don’t consume dairy products at all.”

Though most people would attest to the nutritious nature of cow’s milk, adulthood and interspecies milk-drinking isn’t found in nature. Humans can attribute this ability to a mutation that emerged 6,500 years ago (or more) that meant production of lactase, which would normally stop during ages four to five, continued throughout adulthood, according to the website nature.com. Freshman Lola Gingerich possesses the ability to digest milk but finds it repulsive.

[quote]I just don’t like milk. It’s disgusting to me. When I was young, my parents didn’t make me drink it, but it was a habit. They would have us drink milk,” Gingerich said. “As I got older, I only had the tiniest bit in cereal, and now I’ve completely cut it out except in [foods like] baked goods because I can’t really help that. Now I use almond milk for my cereal and whatever else.[/quote]

While Gingerich’s preferred alternative is almond milk, soy milk is the best match with respect to protein in the opinion of Jennifer Bean, an assistant professor of nutrition and exercise physiology at the University of Missouri. In general, Bean is more concerned about sufficient intake of nutrients than about their exact source.

“[Amount of cow’s milk consumption] is for the individual to decide, not the health professional. If one chooses to eliminate an entire food group completely, a person must plan to make up the key nutrients that food group provides in some other way,” Bean said. “The key nutrients for the dairy group are mainly calcium, vitamin D and riboflavin.”
In regards to nutrition, Gingerich has done her research. Last year in her eighth grade English class she completed a report on why dairy isn’t necessary. Gingerich even has support from her dad, who also dislikes milk despite the fact that her mom and brother do drink six gallons a week.

“It’s the taste. It’s like I have a phobia of it. I don’t understand why I don’t like [cow’s milk], because I haven’t had it in a really long time, so I would guess that it’s tasteless, but [I don’t like] the concept,” Gingerich said. “Dairy in general creeps me out.”

What is your opinion on milk alternatives? Comment down below.

I really appreciate the author’s attention to detail and her willingness to research multiple perspectives and opinions so the article could be well rounded. Before reading the story, I didn’t know how popular non-cow’s milk was becoming. I have never tried anything other than “regular” milk, but I will have to test these other products now that I know they exist!

Personally I love almond milk although I have no problem with dairy milk. It’s my opinion that almond milk has more flavor and aside from that, has less calories. Nevertheless my favorite dessert is still ice cream!