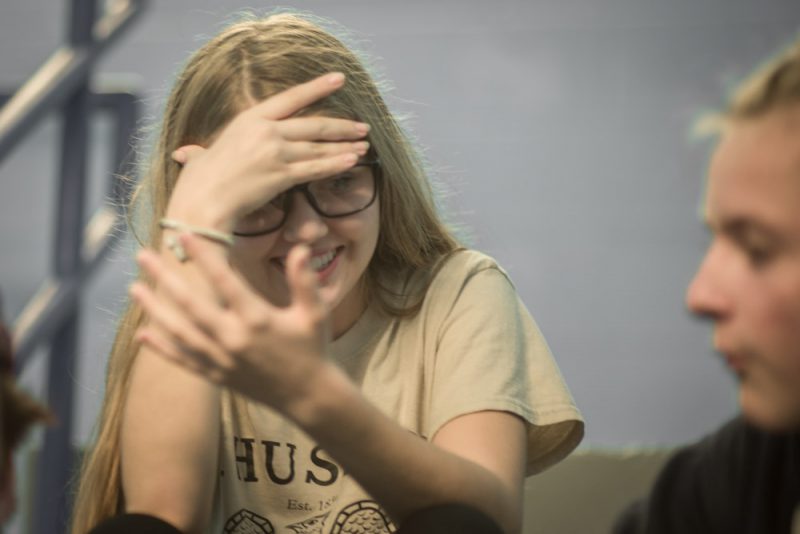 [dropcap]A[/dropcap]udience members cheered as the fighters on stage ripped each other apart, the scene reminiscent of those that took place in the ancient Roman Coliseum. One blow after another after another, the entertainers tore each other apart with mockery, igniting laughter from spectators. This brawl is one of many on the Comedy Central Roast show, and, strangely enough, isn’t a physical one, but, rather, a verbal battle of insults known as roasting.

Merriam-Webster defines roasting as “subjecting one to severe criticism or ridicule.”

For sophomore Meredith Farmer, roasting is another form of learning more about peers.

“I enjoy [roasting] if it’s all in good fun. Usually, I’m a part of roasts where it’s of the people there, and everyone is saying things about [each other], kind of like passing around the roasting. It makes for a pretty fun time because you can laugh at your own faults and know that it’s okay to have those because you’re hearing what all of the other people’s faults are, too,” Farmer said. “You go away feeling better about yourself because you realize it’s not just you. I think [roasting] helps us feel more relaxed about ourselves and makes it a fun thing.”

Though willingly subjecting oneself to taunting may seem bizarre, a study published by Sage Journals explains the social implications of roasting and why people can enjoy it. Roasting, the article describes, is a form of disparagement humor, or a type of humor that denigrates, belittles or maligns an individual or social group.

[quote]“The impact of roasting on a person’s emotional or mental well-being depends a lot on the quality of the jokes and the nature of the person being roasted. Like many effects in psychology, there may not be a straightforward ‘linear’ relationship, but instead what we call a ‘curvilinear’ relationship,” Lawrence Williams, a professor of marketing at the University of Colorado, said. “My colleagues and I have studied situations where attempts at humor can backfire because they are too negative and hurtful, or they cut too close for comfort.  Psychological distance plays a big role in determining whether a roast goes wrong.”[/quote]

Senior Tricia Carver-Horner and her friends roast each other on occasion; she believes it allows them to become closer. She added roasting, however, doesn’t work well outside of a close group because it’s hard to know others’ boundaries.

“I’d say roasting is okay if it happens among friends and isn’t intended to be rude, but there is usually a fine line between what people are okay with others saying and when it could be considered bullying,” Carver-Horner said. “It can be really funny, and sometimes it can make a conversation more interesting. It turns observations about people into something that can be relatable and make others laugh.”

Making roasting personally engaging, Williams said, is the key to what makes that type of humor comical rather than insulting. If the jokes aren’t relatable to the audience then people wouldn’t enjoy roasting.

“Finding the humor in a joke is a shared experience that requires some level of mind melding, where an audience needs to understand what the joke-teller knows, and the joke-teller needs to understand what the audience knows in order to make jokes work,” Williams said. “With roasting, there is this added element of being ‘mock’ attacked in a way that is safe and ultimately inconsequential. In this way, being roasted can help people realize that their status within a group is ultimately safe from attack.”

Williams’ group position idea is similar to what happens to Farmer and her friends. When the friends roasts each other, Farmer said the group uncover everyone’s opinions on a topic and subsequently brings them closer.

“[My friends and I] have definitely [roasted each other], but in the end it brings us together more because we realize that we all have our own faults and that, once we recognize those, we can do more to fix them,” Farmer said. “From what I’ve seen, people are a lot more open if they’re interested in what’s going on or are having fun. Roasting is a way to get people to open up and say their true feelings even if they may not realize it.”

Do your friends roast each other? Let us know in the comments below.

Out of Line: Smokey nights