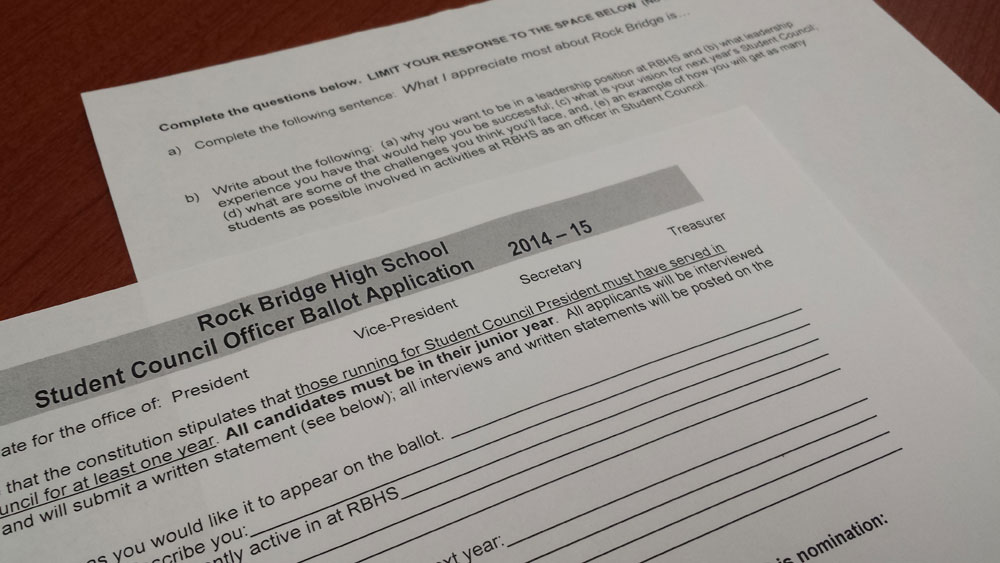 As a teacher and club sponsor at Rock Bridge, I’m a believer in the school-wide philosophy of independent, student-driven learning and leadership. Because of this, I have always strived to avoid speaking for Student Council, or putting myself at the forefront of their decisions. Student Council, after all, was designed to be a student-operated organization that would work to represent and provide for the school as a whole. However, on occasion there are situations which I feel require my voice or my response, and recently, one of those times has presented itself.

On Thursday, October 26th I was saddened and dismayed to arrive at school, greeted with the headline, “StuCo overspends, has to fundraise” on the front page of The Rock. I had a discussion the next day with the three main editors, and then a discussion with Student Council later about the headline. After the article was reposted on Bearing News on November 1st, with an even bolder tagline, “Student Council lacks funds this year as the club overspent on student apparel and now is planning fundraisers to raise money,” I finally felt compelled to pen a response.

As a teacher of Civics, I wholeheartedly believe in the rights of the press. To add to that, I have always been an avid reader of The Rock, and I support the staff and students who are involved in the creation of it. I realize that the press has the right to report on any issues, and further, the right to report any angle of any issue.

However, that being said, I do fear that there is a growing trend, not only here at Rock Bridge, but in our national media as a whole. Holistic reporting of news has been traded for sensationalist headlines and eye-catching click-bait, which are choices that have the potential to realistically harm journalistic integrity.

My concerns with the headline stem from the fact that it was wholly untrue and greatly misleading, on all accounts. If you read past the headline into the article, which statistics show only roughly 1/3 of Americans do, it is a story about neither a depleted budget, nor charity fundraising efforts. The story was a simple report outlining the fact that Student Council frontloaded the costs for class shirts that are for sale in the Activities office, and at the time of publication, had not yet made a clear profit from the shirts. While this is true, it doesn’t lend itself to the first part of the headline, “StuCo overspends.” While yes, Student Council has not seen a clear profit from the class shirts yet, we also expect to continue selling them throughout the year. Investing in the shirts did not cause us to “overspend,” in any context of the word, which I made clear in my interview for the original article. During the preparation for Homecoming, StuCo expects to invest a large portion of their annual budget. There are means of making part of this money back (i.e. dance tickets); however, some money is also spent knowing that it won’t be re-accrued. This is simply because we enjoy investing money in the school. This year, Student Council never experienced a situation of overspending; we simply had to make smart choices on the expensive items we purchased.

While the allusion that Student Council had overspent was bothersome, it wasn’t nearly as alarming as the second implication: because we overspent, we had to use the money accrued from Hurricane Relief fundraising as a means to replenish the depleted budget. After all of the hard work to raise money throughout the week for charity, I would have loved to see the headline story focus on that positive element. However, as the sponsor, I understand that it is my job to convey that information. Therefore, I would like to take this moment to let the school know the facts of the fundraising efforts: the combination of the Bonfire / Carsmash and the Change for Relief coin war raised just shy of $400 dollars for Hurricane Relief. Student Council was thankful for your donations, and chose to add their own contribution.

As a result, in total, a check for $500 was given to Direct Relief. We assure you that every cent of fundraising money, plus an additional donation on our own behalf, went to Hurricane Relief, and fundraising did not, in fact, go to replenish an “overspent budget.”

Student Council is an organization created in the essence of being a representative assembly for the student body and the school itself. Yes, StuCo hosts the events, plans the assemblies, and attempts to create a fun, spirited, social atmosphere. However, beyond that, in principle and in purpose, StuCo is an organization that strives to consistently give back to its school and community, and represent Rock Bridge respectfully. The number one reason for the organization’s existence is simple: to serve. Nothing brings StuCo greater joy than being able to invest in our home and our school, which causes the budget to ebb and flow throughout the school year. We are immensely proud to invest in you all, to donate to charity, participate in philanthropy, and to give back to our community, all in the name of Rock Bridge High School. We will consistently find a way to make those things our number one priority.

I would like to end this with a thank you to all of you for always supporting what this organization strives to accomplish.Thank you for being a school worth investing in.

We learned of Student Council’s unease with the story’s headline and featured image in the Oct. 26 issue of The Rock from a student not in student government. A different student, who also was not in student government but was in one of Mrs. Kelley Wittenborn’s classes, said the Student Council sponsor had voiced her unhappiness with the story, so we requested a meeting with her to listen to her concerns.

After the meeting, we posted the story on our companion publication, Bearing News, as we do with all articles. Our policy when moving print to online is that we do not change headlines or captions, but after talking with readers and Mrs. Wittenborn, we added an excerpt focused on Mrs. Wittenborn’s original email interview with Ben Kimchi, the author of the article in question. She wrote to him: “Groups all the time go through highs and lows with budget funds. We are currently a bit low on funds, but through dance ticket sales and other fundraising through the year, we will succeed, I am sure, in replenishing our budget.”

As to the claim that The Rock said Student Council overspent this year, nowhere in our story was it specified that current members or their sponsor were at fault for overspending. The material Kimchi put into the article came from an email interview between him and Mrs. Wittenborn. She wrote on Oct. 4: “While yes the budget is low this year, and yes there has been spending in the last three to four years that probably led to the budget being low, at the end of the day, a major purpose of StuCo, and something that we enjoy most, is getting to provide opportunities for fun, community building, and overall just enjoyment of the school atmosphere, and if we need to spend some of our own money to do that, that is something that we are willing to and enjoy doing.”

Though the headline “StuCo overspends, needs to fundraise” paired with the hurricane relief fundraiser photo caused some people confusion, the caption, located in large print, says, “Senior Addison Logsdon takes a swing at a used Jeep Patriot, donated by Stephanie Harman, on Tuesday, Oct. 3 at a fundraiser put on by StuCo. The event, which promoted homecoming, raised about $400 for a hurricane relief foundation.” Neither these words nor the story itself asserts that Student Council used the hurricane relief effort to bolster its budget. One reason we placed the car smash photo with the story was to show that Student Council turns its energies to unifying students and providing a way for RBHS to come together.

While we understand statistics point to people’s inability to look past a headline, it is outside of our power to control the actions of our audience; rather, we strive to ensure that correct information is presented for those willing to read. Our writer, Ben Kimchi, reported professionally and truthfully.

Don’t Lose Focus: Far up above