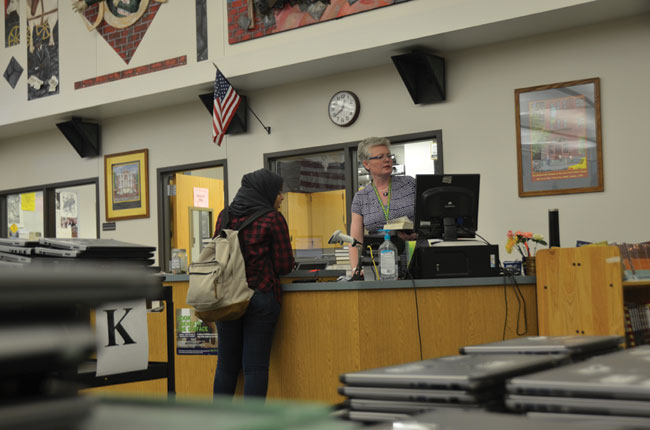 Check out and go: Sophomore Layla Kheiralla checks out a laptop from media specialist Beth Hempke Shapiro. The Media Center uses an electronic inventory system in an attempt to combat annual damages to media equipment.

Staring down at her iPad mini with frustration, junior Zainab Ibitoye tried to get a message that popped up onto her screen to go away. The notice asked her to put in a username and password, and it wouldn’t go away although Ibitoye has the right information typed in. She needed her iPad mini for research in Advanced Placement (AP) world and was worried she wouldn’t finish her class work.

After asking her peers and teachers, Ibitoye walked to the media center looking for media center specialist Beth Shapiro. Together, they tried to figure out how to solve the issue, and then Shapiro told Ibitoye she would solve it and sent her back to class. Three days later, Shapiro had Ibitoye’s iPad mini back to normal.

Along with helping students with technology, Shapiro helps students with research and finding different books to read. While students quickly pass through the media center to get from the east and west side of the building, they may not know the interesting life Shapiro has led before she took a job in as a Bruin. Students would never expect Shapiro  to have been a singer in a baroque ensemble in her twenties, have a law degree and went to college at Northwestern University.

Growing up in a suburb of Illinois, Shapiro lived with her younger brother, her father—a professor of music at Northwestern University—and her stay-at-home mom.  Her fondest memories of her childhood, which made growing up pleasant, came from when she would hang out with the block of kids she grew up with.

“We would spend a lot of time outside just playing big time and some of those kids I’m still friends with,” Shapiro said. “Two in particular are my oldest friends and we still talk on the phone periodically and [also] text, [plus] we’ve gotten together [from time to time].”

Now doing what she loves in a place she loves, Shapiro recalls a time when she was younger and aspired to be a veterinarian or a writer; however, when career path decisions had to made, she decided not to pursue them because of her dislike of science and operating on animals.

“I never ended up being a big fiction writer or anything, but I always have written in my jobs or done freelance writing, so those are my earliest things that I wanted to be when i was a kid,” Shapiro said. “I never had a calling to do one specific job or follow one location so i’ve done a lot of different things in my life.”

Instead of pursuing a veterinary career, Shapiro is content with being the owner of many furry and feathery pets. She currently has two dogs, a cat, a snake, a zebra finch and two chickens.

Despite her  love of animals, Shapiro has chose different career paths. She has been an art administrator at the Art Institute of Chicago, a tax consultant and her current position of RBHS media center specialist.

Shapiro’s other love, music, was gained from her dad, Frederick L. Hemke who was not only a professor,  but a world renowned saxophonist, as well.

Surrounded by musicians in her youth, Shapiro played the violin in her high school orchestra where she met her husband, Nick Shapiro. She then went on to join a professional baroque ensemble as a singer in her twenties.  Although she loved it, the ensemble eventually dissolved, and her love of music was passed onto her two children, who are both RBHS alums, Daniel Shapiro, a senior at Brown university, and her youngest son, Martin Shapiro, a freshmen at the New School University.

“Music has always been a part of my life and something my husband and I have shared. I enjoy a whole range of music so I don’t really have a favorite [genre]. I listen to a lot of jazz because my younger son is a jazz pianist and because of that I have become more educated in jazz, but I’ll listen to anything, [such as] classical,” Beth Shapiro said. “I also like a lot of current stuff, I’ll listen to just new trendy pop stuff as well I just love all different types.”

Despite her love for music, Shapiro decided to pursue a different passion for her academic degree. At Northwestern University, Shapiro got her license to practice law in Illinois and would regularly visit her brother, a professor of music at MU. It was these common visits that would prompt Shapiro to move with her family to Columbia.

Not only was their love for Columbia a factor in their decision to move, but the Shapiros’ disdain for long Chicago commutes made the lifestyle change easier to decide on as well as wanting more time to spend with family.

As a self- described “big band mom,” Shapiro was already a fan of RBHS because of her two sons’ involvement in band, so after she obtained her master’s degree in library science in 2015 from MU and the media specialist job opened up, Shapiro took her chance to become a Bruin.

Also a Bruin, technician Jeremy Young works side by side with Shapiro in the media center and describes Shapiro as fully involved in everything she does.

“She wants to be aware of as much as she can involving technology and the instructional side of her position,” Young said. “She is always willing to learn, understand and implement anything she encounters to assist teachers and students.”

One of those students is Ibitoye who appreciates seeing Shapiro’s friendly face in the media center every time she goes in there. Shapiro was able to get Ibitoye out of another sticky situation after she jammed the printer. Ibitoye was scanning her mini journal for AP world but was unaware she wasn’t supposed to put notebook paper. Shapiro came over to solve the problem and helped Ibitoye follow the instructions the printer gave to unjam the paper.

“I am appreciative of her presence in the media center. She is always available or tries her best to help students with their technological issues,” Ibitoye said. “She is patient and doesn’t get mad when things get messed up.”

Spending her time working in the media center, Shapiro likes to keep up with potential books that teens might read so that she can recommend them, recalling her favorite childhood novel as “Gone with the Wind”. Shapiro believes that libraries give knowledge and enjoyment and an infinite supply of information.

“I love learning and libraries to me are the gateway [to information],” Shapiro said. “I really don’t know [what I expect for the future,] I’m pretty flexible for to seeing how the future unfolds] for now; I’m really happy right here and we’ll just see.”

Behind the Paper – Valeria Velasquez

No time like the present: Capitalism threatens holiday traditions