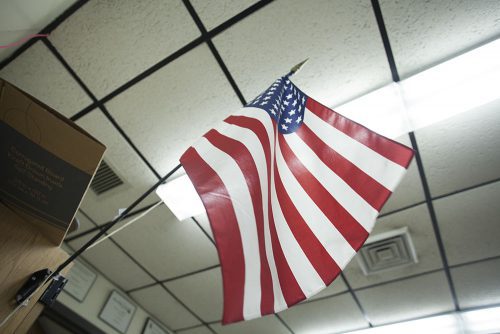 A year ago, President Donald J. Trump was inaugurated and officially became the 45th president of the United States. Though it’s only been a year since he took office, Trump has already accomplished so much, from passing and repealing a plethora of laws to revolutionizing the online presence of the president. This is a summary of the president’s first year.

President Trump spent a great deal of time pushing for new immigration laws and restrictions and finding a solution for illegal immigration.

Trump’s first administrative action for immigration took place Jan. 27 when he signed an executive order banning entry for 90 days by citizens from Iraq, Syria, Iran, Libya, Somalia, Sudan and Yemen. The next day, protests took place in airports across the nation in opposition to the ban and a federal judge in New York blocked part of the order.

The ban faced criticism and more blocks from other judges as Trump and his administration defended the order. After three months of heated debate, Trump created a new ban which excluded Iraq from the nations banned March 6. The new restriction received backlash from Hawaii, who filed a lawsuit against the ban.

In September, Trump revised the ban, adding Chad, Venezuela and North Korea to the list of nations prohibited from entering the United States. The order went through many upheavals and was almost blocked in November, yet Dec. 4 the Supreme Court issued an unsigned ruling that Trump’s travel ban would finally be able to go into effect.

Meanwhile, Trump also worked to repeal Deferred Action for Childhood Arrivals (DACA). The DACA program was created by former President Barack Obama in 2012 to protect youth who had entered the country illegally from immediate deportation.

Trump announced Sept. 5 he would officially phase out DACA in the United States, potentially changing the lives of 800,000 undocumented minors under the program, though the order has yet to get Congress approval.

|Environment|“We must decide on how best to proceed so that we can make lives better, safer and more prosperous.”

Trump’s biggest move toward giving the United States energy freedom took place Aug. 4, when he announced that the nation intended to withdraw from the Paris climate agreement as soon as it was legally eligible to do so. The climate agreement outlines how countries should regulate energy and precautions they should take when consuming and using energy. The United States departing from the agreement will make the nation the only in the world to reject the agreement, since Nicaragua and Syria joined this past year.

In addition to that, Trump has been adamant about adding oil pipelines spanning across the Midwest. The president signed executive orders to allow the construction of the Dakota Access and Keystone XL pipelines Jan. 24 of last year. Yet his move faced opposition to protests across the nation, as the construction of the project would cross over Native American land. Despite the outcry, both pipeline routes were approved; Dakota Access in late February and the Keystone XL in November.

[note note_color=”#a3c3f3″ radius=”16″]According to TIME, Trump set a record for the most Federal Appeals judges affirmed during first year of presidency, successfully appointing 12. In addition to those, Trump also appointed one Associate Justice of the Supreme Court and 10 judges for the United States District Courts.[/note]

“… A plan for economic revival – it is a bold, ambitious, forward-looking plan to massively increase jobs, wages, incomes and opportunities for the people of our country.”

In his first three days in office, Trump signed a bill to withdraw from the Trans-Pacific Partnership, an agreement set up between 11 nations to deepen economic ties and lower tariffs. Trump had the United States leave the group to strengthen the American economy and live up to his campaign promises of “tough trade”.

On Dec. 22 Trump signed the “Tax Cuts and Jobs Act” into law, which the Senate had passed two days before. The law encompasses various different levels of taxes and alters tax policies for citizens; it permanently cuts corporate tax rates and temporarily cuts personal tax rates. Many Americans were in favor of the reform, yet the Congressional Budget Office predicts the legislation will increase the national debt by $1.4 trillion dollars in the next decade. Misconceptions about if the statue takes funding from the Affordable Care Act, otherwise known as Obamacare, spread across the nation as well. 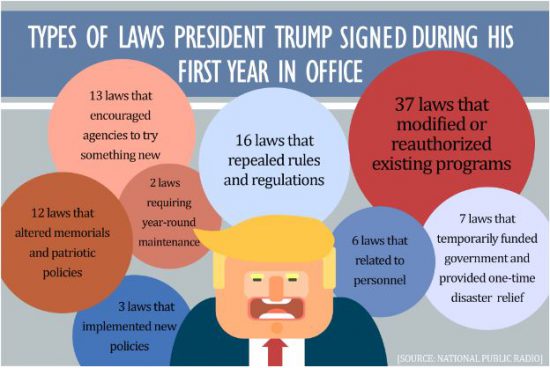 “I believe in universal healthcare. I believe in whatever it takes to make people well and better.”

Trump worked on changing how Americans receive and pay for healthcare since he took office, his main focus set on the Affordable Care Act, or, more commonly known as, Obamacare. He pitched two changes to the act in July and August and both failed to receive affirmation from Congress. In his tax reform plan, however, it repeals Obamacare, Trump says. There has been speculation and debate as to whether that fact is tangible or if the reform only removes Obamacare tax, and if it is, policy experts believe removing the mandate will force insurance premiums to rise.

|SocialMedia|“I find it tremendous. [Social media] is a modern form of communication… It’s where it’s at.”

Lastly, Trump has innovated how the president communicates with Americans by using Twitter to quickly spread his opinions and news out to the public. Instead of spreading his ideas in formal speeches, written documents or via the press, Trump tweets about pressing matters or concerns to his 46.8 million followers. The messages are not occasional either, he tweets, on average, six to seven time per day. By having a big social media presence, Trump, following in former president Barack Obama’s footsteps, revolutionizes interaction between the president and Americans.

‘Call me by your Name’ tastes sweetly of forbidden love

Can you remember the 5 protections in the First Amendment?

It was kind of difficult for me to read this with it being so unbiased. That means you did a good job though. A lot of the things Trump has done have made me angry and I wanted you to point those at, but as a news writer, it’s not your job to share an opinion, it’s your job to share the facts, so I applaud you.

Love the way this flows, and how much it informs me on the topic of politics. great quotes and statistics too. Job well done

Interesting views on healthcare, but I think one effect that hasn’t gotten enough notice is the instability in the market’s Trump’s caused. Some healthcare providers are pulling out of rural areas, as thing Trump has done have caused costs to rise, which isn’t mentioned often.

Very informative and detailed overview of 2017 in politics. It’s always important to reflect on the past and whatever issues are at hand, and I thought this article was very useful in that regard.