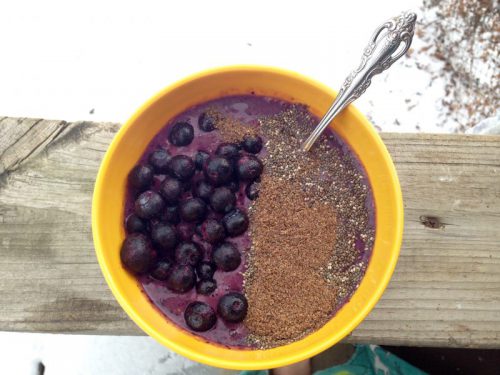 tried eating “Raw til 4” for a week. For those of you not familiar with the phrase “Raw til 4,” it is a diet where participants stick to eating foods that haven’t been heated past 118℉ until the clock strikes 4:00 p.m. I myself pretty much only consumed fruits and veggies, although technically one could eat raw milk, fish and eggs if it struck their fancy.

So, how did it go? There were a couple of major themes to my eating patterns over the week. First of all, I ate a lot more whole fruit than I usually do. Before, I really only had apples, bananas and mandarins occasionally. They just didn’t appeal to me. With the “Raw til 4” diet; however, I was eating at least five pieces of fruit a day.

In the mornings I would make a smoothie for breakfast and then from early afternoon to the evening, I would munch on whole fruit and salads. I found the fresh produce was the perfect addition to my school lunches as it’s portable and fairly filling. Although I didn’t necessarily notice a vast difference in my energy levels, it felt good to power my day through such unprocessed foods.

Secondly, it felt as if my entire day revolved around 4:00 p.m. No matter where I was or how hungry I was, all seven days featured me eating cooked food within 10 minutes of the cut-off. It was like clockwork, literally. I would plan out what I would eat in my head at the time. Then, once I had my meal I tended to eat quite a bit which made me feel a little sluggish but very fulfilled.

In conclusion, I would definitely recommend this diet for someone who’s looking to improve his or her fruit and vegetable consumption. Eating “Raw til 4” forced me to turn to the healthiest of foods to fuel myself. That being said, it isn’t the easiest diet to follow. During the day, if I had a craving for hot tea or wanted peanut butter on my apple, I would try to shake off wanting it until it was the evening. That wasn’t the most fun experience; it felt very limiting. Although I’m sure there are ways to make “Raw til 4” feel much freer, I’m comfortable enough in my own diet to stick with it.

Ratings (green apple means .5 of a point, each category is out of five points)

For a week, I set aside my usual eating habits that I have been accustomed to my entire life and tried out a new, more sophisticated healthy eating plan called the Mayo Clinic Diet. This is a pretty stereotypical diet: eat lots of fruits and vegetables, whole grain instead of wheat, lean sources of protein, little dairy and cut out sugar, save for the natural ones found in fruits. However, the diet also prohibited eating while watching TV, which is significant to me because I like to snack while watching YouTube videos.

Though the diet cut out a few foods I really enjoyed, like milk and peanut butter, and prevented me from having entertainment while I eat, I was willing to give it a shot.

For the first three to four days, everything was going smoothly. My meals consisted mostly of fruits and vegetables which I spread out throughout the day in many small meals rather than three larger ones. My dad usually cooks dinner every night, and luckily he was happy to change the menu for the week and cook things on the diet. I forgot to get pictures of the meals, but he made fish with onions, green peppers and peas one night and chicken with brown rice another night. Also, in those first few days, I wasn’t getting any cravings for anything off the diet. I was as energetic as I usually was and oftentimes not hungry at all.

Though, I did have to spend more time preparing for each meal, which meant getting up earlier to make breakfast and pack a lunch.

When day five hit, however, I almost cracked. I hadn’t gotten much sleep the night before and got a very bad headache. Normally, when I get headaches, I’ll take some Ibuprofen and eat a little bit of chocolate, as that usually helped the pain go away. But because I was on the diet, I didn’t eat chocolate, and the headache continued throughout the whole day.

I didn’t have too many struggles sticking to the plan after that, though, I was craving peanut butter constantly. My energy got lower and lower as the week went on, but I would blame that more on schoolwork than the diet itself.

I don’t see myself continuing some of the practices I learned from this experience. I understand the purpose of not getting distracted or not focusing on eating, however, it was really boring sitting in silence while eating alone. There are also foods I like eating that I can’t on this diet, like chocolate and peanut butter that I missed dearly. Although, I will be eating more fruits and vegetables from now on. I already knew I liked those kinds of foods, I just didn’t know that they could be an entire meal that keeps me full until I tried this diet.

Ratings (each category is out of five points)

What is a gluten-free diet? In the span of the last several years, gluten-free diets have become increasingly popular, despite diagnosed celiac disease remaining constant at roughly 1 percent in the United States. Gluten-free products are on the rise, too, with 28 percent annual growth between 2004 and 2016, raking in between two and three billion dollars annually.

If you think most people don’t know what gluten is, despite claiming they do, you’re right. A recent survey found that only 35 percent of over 1,000 correspondents correctly identified what gluten is. Gluten is classified as a protein comprised of gliadins and glutenins found in wheat, barley and rye. A gluten-free diet avoids all foods that contain gluten and focus more on fruits, vegetables, meats, dairy, rice, beans and nuts.

I spent a week experimenting with the gluten-free diet, and I was disappointed with the results and the experience. I was constantly hungry, and my focus was at an all-time low. I noticed that the foods I was eating weren’t doing much for my body in terms of hunger. Though I felt healthier with the increase of fruits and vegetables in my diet, I wasn’t impressed with the way I felt.

Another thing I noticed with this diet is the difficulty socially. As someone who goes out to eat a fair amount, I realized how challenging it must be for someone with a food allergy to eat at restaurants. I constantly felt like an inconvenience to my waiter/waitress and the chef when asking for things to be left off of my food.

As a teenager, I obviously live under my parents’ roof and eat what meals they cook for me. I had to cheat several times during the week because the meals that my parents prepared contained gluten and it would be rude for me to not eat those meals. If my family followed this diet, it would be much easier to do the same.

In terms of weight change, I didn’t notice a change at all. I weighed myself the day before we began our diets and my weight was the exact same a week later.

Ratings (each category is out of five points, green apples are .5 points) 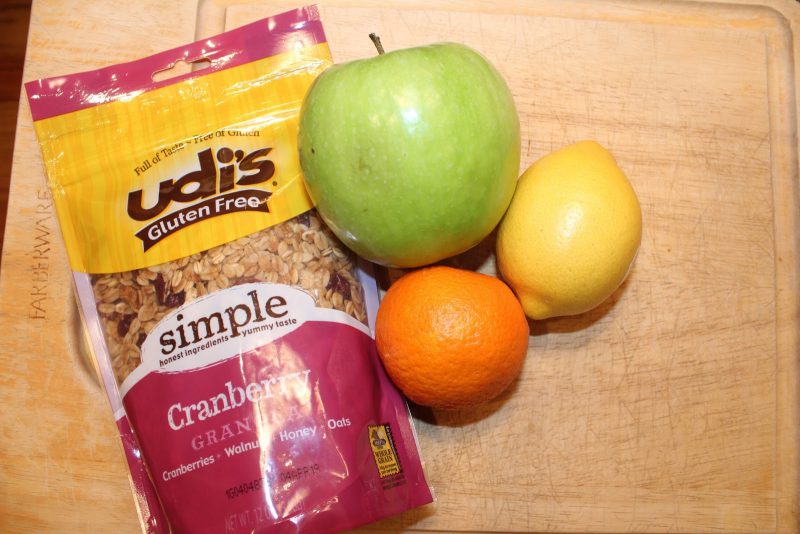 When most people think of the word vegan, they are usually reminded of the people who shame others for supporting the use of animal products. Although I thought that was the basis of veganism, I got to experience being a vegan for a week and came to the conclusion that that assumption was inaccurate.

The first couple days, to put it simply, were very rough. While driving by all the McDonalds and skimming through menus to find things that were actually animal product free, the temptations were almost impossible to overcome. By the end of the second day, I felt hungry, frustrated and confused as to how people make this a lifestyle but, by the end of the week, I made it work.

While exploring different vegan options, I found that fruits and nuts were my go-to foods. Also,
while eating out, I learned that almost everywhere had salad, which was a blessing in itself, but the hardest part about that was that I couldn’t eat most salad dressings because of their dairy products.

By the end of the week, my skin was clearer and my mood was better, but I still craved some ice cream and chicken quesadillas. I learned to be more aware of what I’m putting in my body, and I also learned that dairy products are definitely not good for you, in considering research I had done. Having a raw diet was super good for my skin and my health, but it seemed nearly impossible. When going forward in my diet I have paid more attention to how many raw meals I eat and how much dairy I eat. This week has made me more aware of how unhealthy I was eating and how there are alternatives to dieting.

Ratings (each category is out of five points, green apples are .5 points) 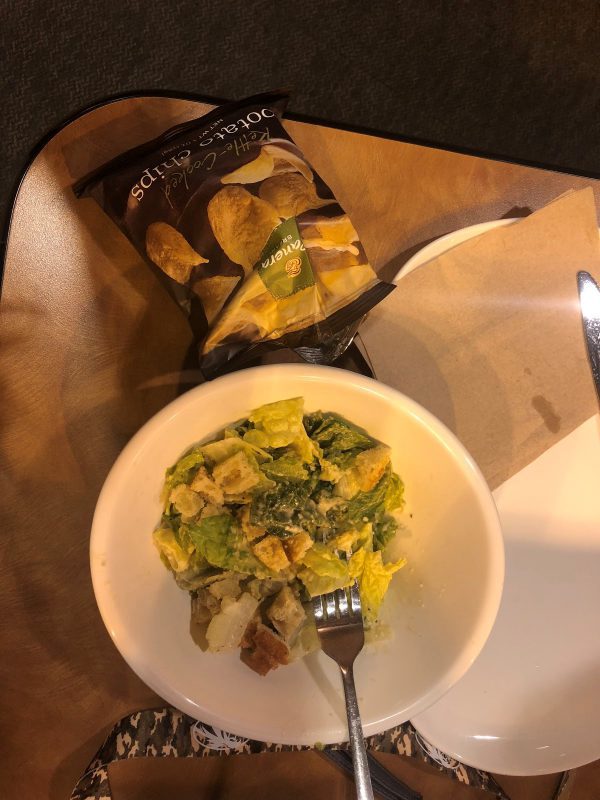 Would you try any of the diets above? Comment down below.

Dieting requires so much of the discipline I don’t have. Reading through the vegan story made my stomach hurt thinking about not eating eggs (which are in so many deserts), ice cream, or even cheese. Personally, I don’t think dieting is good for you because a human needs nutrients from all parts of the food pyramid, and to deprive yourself is just unhealthy, even when you can binge eat after 4.