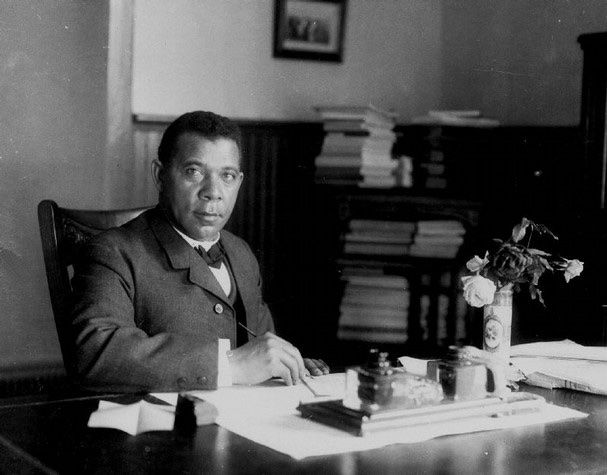 [quote]“I have learned that success is to be measured not so much by the position that one has reached in life as by the obstacles which he has had to overcome while trying to succeed.” [/quote]

As a child born into slavery in Virginia in the mid 1850s, Booker T. Washington put himself through school, with very little support from friends, and became a teacher after the Civil War.

In 1881, he founded the Tuskegee Normal and Industrial Institute in Ala., which is now known as Tuskegee University, which grew immensely and focused on training African Americans in agricultural pursuits. A political adviser and writer, Washington clashed with fellow intellectual W.E.B. Du Bois over the best avenues for racial uplift. Washington focused his efforts on racial solidarity and self-help, as opposed to Du Bois who looked for social change. He encouraged blacks to accept discrimination and combat that with hard work for acceptance.

[quote]“No race can prosper till it learns there is as much dignity in tilling a field as in writing a poem.”[/quote]

During his lifetime and with the company and aid of a few ghost writers, Washington wrote a total of five books: The Story of My Life and Work, Up From Slavery, The Story of the Negro: The Rise of the Race from Slavery, My Larger Education and The Man Farthest Down.

Washington’s ideas on starting at the bottom and working your way up through hard work and tireless hours are seen in today’s generation. While many Americans value education, Washington preached that everyone has to work equally hard to get what they desire in life, and that stands true today.

[quote]“You can’t hold a man down without staying down with him.” [/quote]