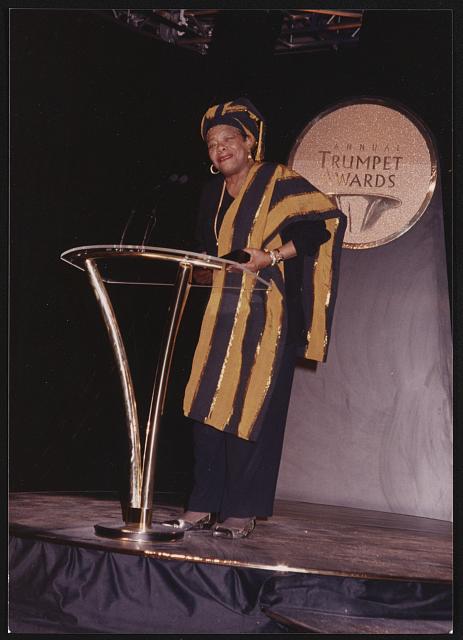 On April 4, 1928, Maya Angelou arrived into a world that would not be kind to her. Society found many ways to put her down for her gender and skin color. Angelou lived in St. Louis, Missouri until her parents divorced when she was three, relocating the young girl and her brother to their grandmother’s home in Stamps, Arkansas.

Angelou returned to St. Louis often to visit her mother and indirectly her mother’s lovers. When visiting at eight years old, her mother’s boyfriend raped her. When Angelou told her father, he proceeded to kill the rapist. Afraid of the power of her voice after the event, Angelou remained in silence for five years after.

This quiet era in her life came to contrast her ultimate legacy.

Angelou’s teacher, Bertha Flowers, succeeded in getting her to talk again in 1941 and encouraged Angelou to pursue her desire in arts and literature. Angelou chose to study dance and acting, and she received a scholarship to study those fields in San Francisco, California. She later earned a Tony Award nomination for her role in the play Look Away (1973) and an Emmy Award nomination for her work on the television miniseries Roots (1977).

In the 1960s, Angelou put her performing career aside to travel abroad in Africa, where she became an editor, freelance writer and a civil rights activist alongside black nationalist leader Malcolm X.

When she returned to America, her calling for writing erupted on all platforms, including poetry, books, spoken word, television and radio talk. In her works, Angelou passionately defended the rights of women, African Americans, and other ignored people.

In 1969, Angelou wrote an autobiography and a poem both titled I Know Why the Caged Bird Sings. Both pieces outline the struggles she and those she spoke for faced in racism and oppression.

One stanza of the poem reads,

[quote]But a caged bird stands on the grave of dreams, his shadow shouts on a nightmare scream, his wings are clipped and his feet are tied, so he opens his throat to sing.[/quote]

The caged bird she speaks of represents the containment she felt through the hardships in her life and the dreams that those against her have crushed. The final line in the stanza is significant in how Angelou found her voice after the incident with the rapist that silenced her early in life. Despite the limitations put on the caged bird in the poem, it still sings for freedom and hope, much like Angelou did through her writing.

Angelou died on May 28, 2014 due to her body’s growing weakness and heart problems. She used her 86 years on earth to convey messages in her writings that were beyond the words on the page.

“Above all, she was a storyteller — and her greatest stories were true,” former president Barack Obama said.

Her pieces told the stories of the hate and pain she felt in her life and boldly encouraged people to change that destiny for other people.

Angelou was silenced many times in her life, but she found her voice in the art she created through her words.

[note note_color=”#6cd3a1″ radius=”16″]In this video, Maya Angelou recites one of her many famous poems. “Still I Rise” illustrates the self-respect and confidence she developed over the years and encourages other victimized people to do the same. [/note]

How does this video inspire RBHS students?

Jack Stevens, sophomore- “It made me feel confident in both myself and my values.”

Drew Morris, junior- ”The video made me feel inspired and motivated to pursue my goals.”

Mucyo Bangerezako, senior- “It’s old but still relevant. It boosts the confidence of the poor, the weak and all those who feel oppressed by unjust systems. It encourages me to not take for granted the rights that were fought for.”

Ramon Tovar-Yampara, senior- “It made me laugh a few times. It brought a smile to my face because of her positive attitude. It reminds me of how far America has come in terms of discriminating people of color like myself.

Jillian Barnett, junior- “This video made me feel like she always had obstacles in her way but continued to rise because she was never going to give up.”

Riley Jones, junior- ”The poem is really impactful for women who have ever felt like they can’t be sassy or sexy without being labeled ‘bitch’ or ‘slut.’ During the era of ‘Me Too,’ I feel like it’s really important for women, especially [people of color], to embrace their confidence, and I like this poem and the video a lot because it is so empowering. Angelou enables us to feel rich in love and happiness and confidence even in the face of historical silence and submission.”