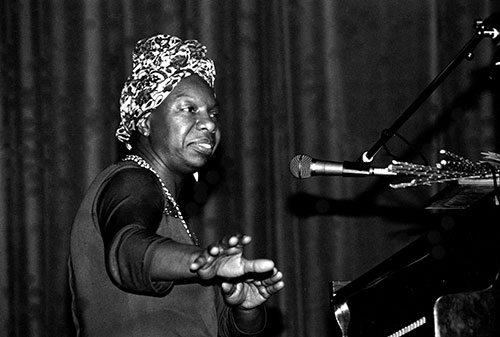 By source, Fair Use, https://commons.wikimedia.org/w/index.php?title=Special:Search&limit=20&offset=0&profile=default&search=nina+simone&searchToken=eelt0mzegpykovap63v39eq41#/media/File:Nina_Simone14.JPG

“To be young, gifted and black,

Oh what a lovely precious dream

To be young, gifted and black,

Open your heart to what I mean

In the whole world you know

There are billion boys and girls

Who are young, gifted and black,

Blues ballads such as “I Put A Spell On You” and “I Loves You, Porgy” established Nina Simone as a distinctive, well-known vocalist among white and black artists alike. It was the vulnerable, accurate and still-relevant lyrics of songs like “To Be Young, Gifted and Black” and “Mississippi Goddam,” however, that made her an essential activist of the Civil Rights movement.

Simone experienced her first inclination to be a part of the fight for racial equality at age 12 during a piano recital. Her parents, who were ministers at the church where Simone regularly performed, sat in the front row to watch their daughter but were forced to move to the back row in order to make room for white audience members. Outraged, Simone refused to play until they could move up front. With this stubbornness, Simone continued her classical piano training in hopes of being the first black woman to perform at Carnegie Hall. In 1950, however, her application to the Curtis Institute of Music in Philadelphia was denied, and she believed it to be because of her race.

“It was because I was black. I certainly played the piano very well,” Simone said about the denial in a 1992 documentary titled Nina Simone – The Legend. “The rejection was so unequivocal to me that I haven’t gotten over it yet.”

Despite this obstacle, Simone kept playing in bars and nightclubs around Atlantic City, ultimately releasing her successful debut album, “Little Girl Blue” and a number of other records that helped her gain popularity in New York. In 1964, however, her content took on a new purpose when she released “Mississippi Goddam” in response to the 1963 assassination of Civil Rights leader Medgar Evers and the 16th Street Baptist Church bombing in Alabama. Several southern states boycotted the song. On the same album, the song “Old Jim Crow” addressed the unfair laws that upheld the “separate but equal” standard.

You’ve been around too long

‘Til your dead and gone

It’s all over now”

“It was dangerous, yes; we encountered many a-people who were after our hides at different times, and I was excited by it, though, because I felt more alive then than I feel now because I was needed,” Simone said. “I could sing something to help my people, and that became the mainstay of my life. That became most important to me — not classical piano, not classical music, not even popular music, but Civil Rights movement music.”

In addition to her music, Simone also helped propel the movement by speaking at meetings such as the Selma to Montgomery marches. Like Black Panthers leader Malcolm X, she favored violence as a opposed to a peaceful revolution.

The powerful messages in Simone’s music caused labels to boycott her records, so she returned to producing less controversial music and ultimately sold more than one million records, making her an international best seller. She died of breast cancer in 2003, but the talent and influential messages exhibited in her songs live on, carrying into racial and police brutality protests of the 21st century.

Get to know your Courtwarming 2018 king candidates