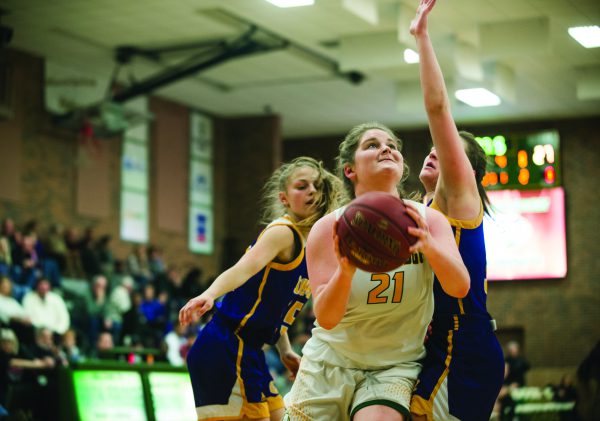 [dropcap style=”light” size=”4″]W[/dropcap]ith a strong season and an even stronger [14-7] record propelling the girls’ basketball team forward, the Lady Bruins will face Blue Springs High School Tuesday Feb. 20. After facing the Wildcats, the team will have one more game to play before their first district game Feb. 26.

Senior guard Payton McCallister does not feel the pressure of Tuesday’s game but, instead, plans on concentrating on the game plan.

“[Blue Springs High School is] a district team so those games are even more important for district seeding,” McCallister said. “[However,] we know it’s just another game and not to overthink.”

The mindset McCallister possesses is the same for teammate junior forward Maddie Collier. Collier thinks the Wildcats are not going to be a challenge for the team because they have lost a lot of their strength from last year [6-18]. Currently, the Wildcats have an overall score of [4-5], winning less than half as many games as the Bruins.

While the largest margin the Bruins have lost by is nine points on Feb. 2 against Kirkwood High School (54 – 63), during the Webster Winter Challenge, the Wildcats largest gap is 10 points when they went against Raymore-Peculiar High School Dec. 7. While not an immense difference, Collier is still confident the team has what it takes to succeed.

“I think we just gotta stick to the game plan and focus on us mainly,” Collier said. “I think [this season is] going pretty good [because] we are going hard and I’m excited for postseason.”

Head Coach Jill Nagel also believes her team has the ability to keep the successful streak going. While she recognizes the importance of the game because it is close to districts, she has placed her focus on more forthcoming games.

“We have played a challenging schedule and I see growth from each game,” Nagel said. “[The] Blue Springs game will hopefully be a good tune up for districts since we play at their place, which is also the site of the district tournament.”

With districts nearing, it also marks the end of a season. With another year coming up for Collier, as a senior, McCallister reflects on the year so far. While this season, the team had to deal with four seniors absence after their graduation, more are leaving after 2017-18. More than half of the team consists of seniors and, therefore, will not be on the team next season.

“Our season has been going super well,” McCallister said. “We win a lot and when we have lost they have been very close games.”

McCallister concludes in order to defeat the Wildcats, the team has to prepare and keep working hard, and playing like they know how.

“We for sure take it game by game and prepare how we need to for that game,” McCallister said.

Do you think our team has what it takes to beat the Wildcats? Let us know in the comments below.