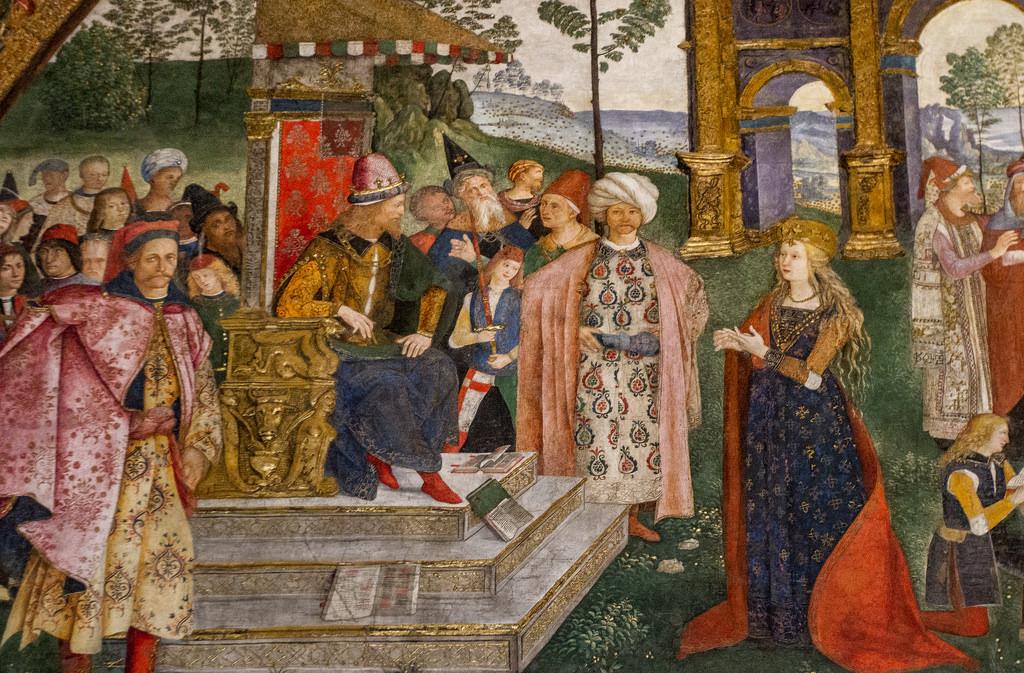 In the 15th century,  teenage girls were considered fair game for marriage. While the 13-year-old girls of modern-day developed countries may have trivial things such as the latest episode of a trash CW show or Logan Paul’s latest problematic vlog on their mind, at that same age, many 15th-century girls had the needs of their (much older and rarely fabulous) husbands among their top  priorities. In this edition of Royal Tea, we will be discussing the life of the beautiful Lucrezia Borgia, whose family was known for their fair share of juicy scandals and frivolous secrets.

At just 12 years old,Lucrezia Borgia, the illegitimate child of Pope Alexander VI, was the muse of the famous Italian painter, Bernardino di Betto, who used her as a reference for his painting of Saint Catherine. Only a year later, Lucrezia, used as a pawn for sociopolitical gain by her father, was married off to Giovanni Sforza. The two had  a not-so-tasteful fourteen year age gap between them. The wedding of Giovanni and Lucrezia was quite the event, attended by countless of Rome’s social elite; poor little Lucrezia must’ve found herself drowsy and worn out by the end (as it would’ve been way past her bedtime), in a night that celebrated an embrace of her deepest fears. Fortunately, Lucrezia’s union to the illegitimate Sforza son lost its touch of importance in the years that followed, and the Pope pulled a few strings to provide an annulment for the pair, on the grounds that Sforza had never consummated their marriage. Yet, some consummation surely must’ve occured, as the young Lucrezia was with child at the time of their annulment. Rumors, fueled by her ex-husband’s bitter rage, spread that the Pope had granted the annulment “to have the freedom to enjoy himself with his own daughter” and that there was impropriety between Lucrezia and her older brother, Cesare.

The paternity of Lucrezia’s child, whom she gave birth to in secret, remained unknown, but those full of humor and a desire to spread gossip claimed that the child was a product of Borgia incest. To combat the rumors, the Pope tried to push the narrative that the child was actually Cesare’s, who fathered a whole classroom’s worth of illegitimate children. Despite a tumultuous marriage so early in her life, Lucrezia later married Alfonso of Aragon, whom she genuinely loved. At the climax of Lucrezia’s pleasant marriage,she was struck with tragedy; after Cesare and the Pope realized that Alfonso was an obstacle to obtaining a crucial alliance, Alfonso was found strangled, suspicions over his death aligning with Cesare’s often muddy motives.

Lucrezia Borgia’s life was the subject of mystery, intrigue, a lot of marriage problems and incestuous endeavors with her controlling, corrupt father and her handsome yet douchey older brother, Cesare. After the death of Cesare, whose desire for political power would inspire Machiavelli’s “The Prince,”  Lucrezia was struck with grief that would impact her until her death. Lucrezia, however, lived a happy life with the art-obsessed Alfonso no. 2 until her death. Despite dying at a thirty-nine years old, Lucrezia’s beauty and status as a member of the Borgia family has remained rightfully immortalized.

Valeria Velasquez is an artist for Southside Media. She is a proud Nicaraguan, a member of the Emerald Regiment Marching Band, a dedicated AP student and a Chipotle Mexican Grill connoisseur. In her senior year on staff, she hopes to continue to refine her art and writing skills.