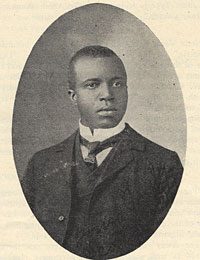 [dropcap style=”flat” size=”4″]O[/dropcap]n Nov. 24, 1868 in Northeast Texas, the Joplin musical family welcomed another child to their family. They named him Scott. Florence Givens, Joplin’s mother, was a singer and banjo player and his father, Giles Joplin, was a violinist. From both instruction and talent, Scott Joplin learned to play the guitar and piano at a young age. The piano, however, was the instrument he truly displayed a gift for. As a result of this talent and passion, Scott Joplin took further instruction from Julius Weiss, a pianist and instructor in Joplin’s hometown.

During his teen years, Joplin left home to become a traveling musician. He played anywhere from bars to dance halls, where the basis of his new musical form, ragtime, which utilized distinct syncopated rhythms and accented accompaniment. Unbeknownst to Joplin, ragtime would become one of the most popular musical styles from the latter part of the 19th century through the early part of the 20th century. Ragtime saw a resurgence in both the 1940’s and 1970’s, however, the genre was never reached the same popularity as it did before Joplin’s death in 1917.

After studying at the George R. Smith College for Negroes in Sedalia, MO, Joplin released the “Maple Leaf Rag.” Although this composition saw minimal profits at first, the piece went on to become the highest-selling ragtime composition in history. “Maple Leaf Rag” sold more than one million copies, which provided Joplin with a steady income for the rest of his life. Due to this success, Joplin was dubbed, “The King of Ragtime.”

Another one of Joplin’s most well known pieces is, “The Entertainer.” Written in 1902, “The Entertainer” was originally recorded by the Blues Boys in 1928, and the 1973 Oscar-winning film, “The Sting,” featured the composition as a theme song for the film. Although this piece doesn’t create a new style of music, the 20th century popularity overall is just another addition to Joplin’s legacy. This composition was also listed as number 10 on the Recording Industry Association of America’s “Songs of the Century” list.

While Joplin also composed several other pieces, a ragtime ballet and an opera entitled, “Treemonisha,” the success associated with “Maple Leaf Rag” and “The Entertainer” ultimately define Joplin’s legacy. In the end, Joplin played an essential role in the creation and development of ragtime music, incorporating the style he created into all of his compositions. Although the age of ragtime is long gone, the unique style that Joplin helped establish has major impacts on today’s music, making Joplin one of the most important composers of the 20th century.