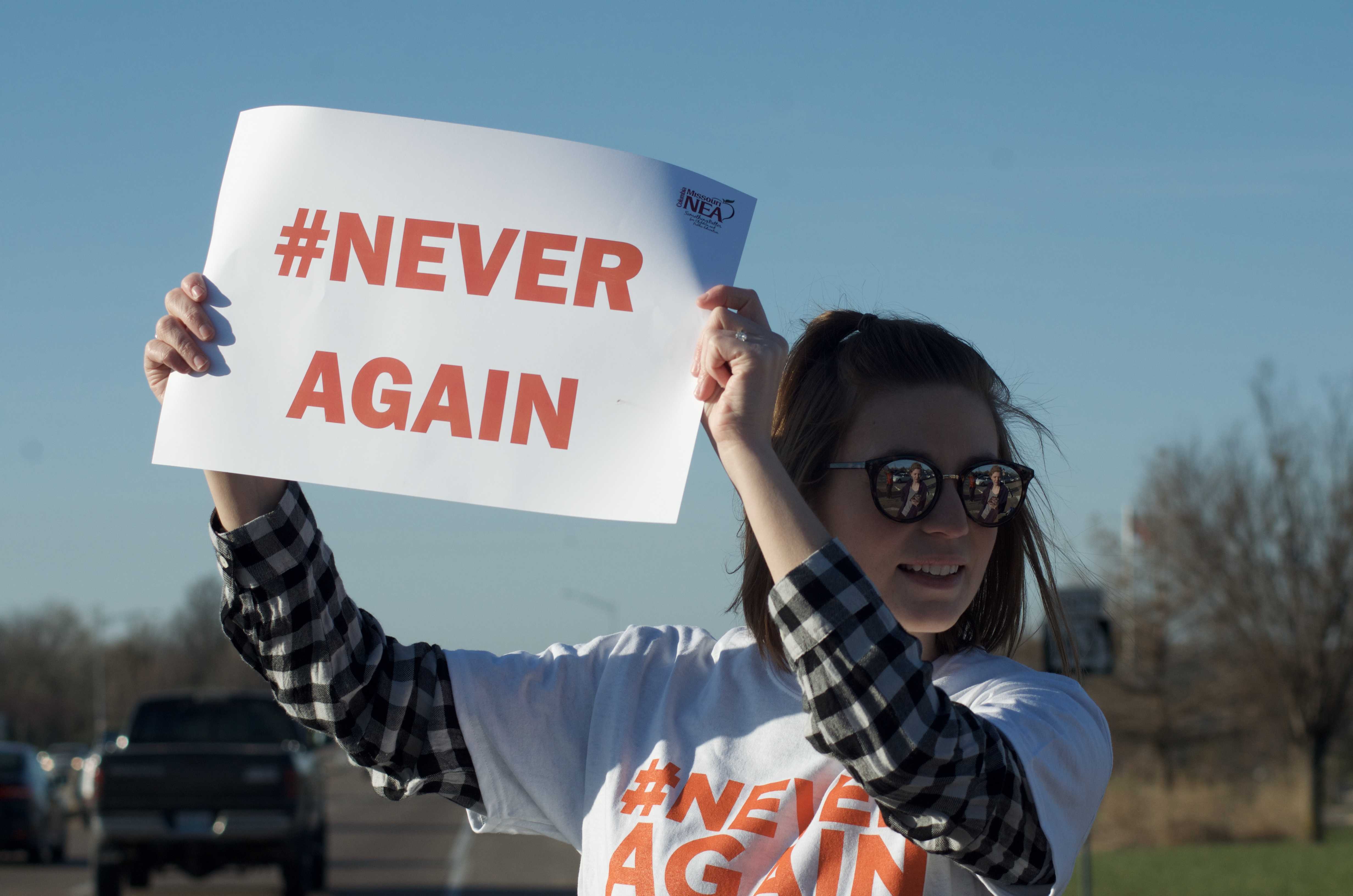 On the second national school walkout after the Marjory Stoneman Douglas High School shooting in Parkland, Fla., RBHS science teacher Kory Kaufman decided he wanted to take action. Kaufman sent an email invitation to his fellow Columbia Missouri National Education (CMNEA) activists to stand on the corner of Providence and Nifong to spread awareness about safety in schools. While only one other teacher out of the 36 Kaufman sent and email to came to the morning Call to Action event, there were several more teacher-orientated rallies organized around town for April 20.

“My hopes for this morning are to again let as many people know as possible that we teachers are concerned about schools and school violence and safety in our schools,” Kaufman said. “We appreciate the fact that students are starting that conversation and we adults need to pay attention to what the students want.”

Later in the day, a handful of students participated in the all-day school walkout. For Kaufman and RBHS math teacher Samantha Kanago, however, the rally began at 7:30 a.m. and ended at 8:15 a.m., then another began after school until 4:30. While Kanago couldn’t attend the second event, she took time before school to share her opinions.

“[I came] today I decided because Mr. Kaufman asked me and I’m [also] an NEA member,” Kanago said. “I think most people would say they agree that gun violence is horrible in schools so how can you not stand up to just say that it’s horrible and you don’t want it to happen.”

With the majority of the reactions from passing cars being positive, Kaufman and Kanago both held their signs to raise awareness and #NeverAgain shirts proudly. Kanago noted waves, thumbs ups and honks as the main response to she and Kaufman’s rally. As for student responses back in school, Kanago said it doesn’t really bother her what people say about her stance, as the Call to Action day was not necessarily a political event.

“If [the rally] became a political conversation, I generally try to avoid expressing my opinion to the extreme in the classroom just because sometimes it can cause conflict,” Kanago said. “I think everybody can agree that you don’t want violence in schools and school shootings so I think that that’s a good thing to talk about. When it becomes political it involved a lot more than just that.”

Kaufman shared Kanago’s opinion in the purpose of the roadside awareness event being about starting a conversation and not politics. Kaufman believes the event to be more of a social statement in order to get safety issues in schools addressed.

Q&A: Students on their collections

‘Isle of Dogs’ finds beauty in a bleak world