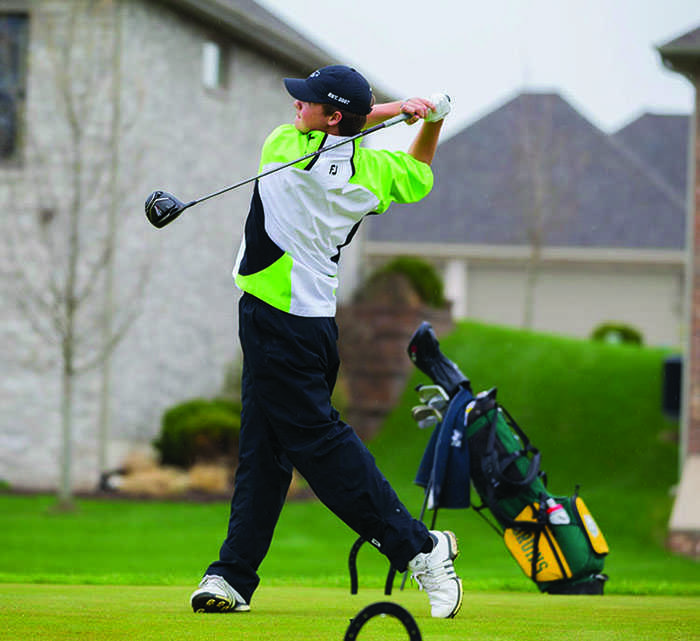 Boys’ golf will compete Monday, May 14 and 15 in the state tournament at the Swope Park golf course in Kansas City, Mo.

The team will play against seven other teams from across Missouri. Coach Austin Reed said the high schools the Bruins typically watch out for are Rockhurst, Chaminade, Saint Louis University and Glendale, which is the defending state champion.

But despite the threat of tough competitors, he said the team has one goal: “We hope to win it.”

Freshman Sean Minor, who will golf at the state tournament, said the competition will be fun, especially with how well the Bruins have been playing this year.

“Overall I feel good about my game going into state,” Minor said. “I think we have a great shot at [winning] state. It’s all about putting two good rounds together.”

Minor, along with four of his teammates, seniors Hudson Dubinski and Sam Rentschler and juniors Ross Steelman and Keith Schaezler, qualified for state after the sectional tournament.

The boys competed in sectionals Monday, May 7 at Forest Hills Country Club. With a final score of 298, the team finished in first place.

“Our golfers are really smart,” Reed said. “When we did our practice round, they did a good job studying the course.”

Reed said the boys do a good job of playing “one shot at a time,” and being able to focus on the next shot, no matter if the previous one was good or bad. He said they knew when to play their shots safe and when to be aggressive. He also said the only thing against them were the possibility of “nervous jitters.”

Minor felt similarly about the success of the day’s plays, but experienced a few of his own hiccups along the way.

Junior Keith Schaezler did not play as well as he hoped during sectionals, but hopes to use this knowledge for state.

“I felt that my putting was all right, but I put myself in a lot of hard spots to be able to execute good shots and come away with a good score,” Schaezler said. “Not a lot of excuse to be made, but it happens.”

Not only did the team come out with the lowest score overall, but also the two lowest individual scores. This type of outcome will be helpful for the tournament on Tuesday.

“With the kind of players that we have, our expectations are pretty high,” Schaezler said. “[If] we keep playing well, we’ll have a pretty good chance of winning state.”