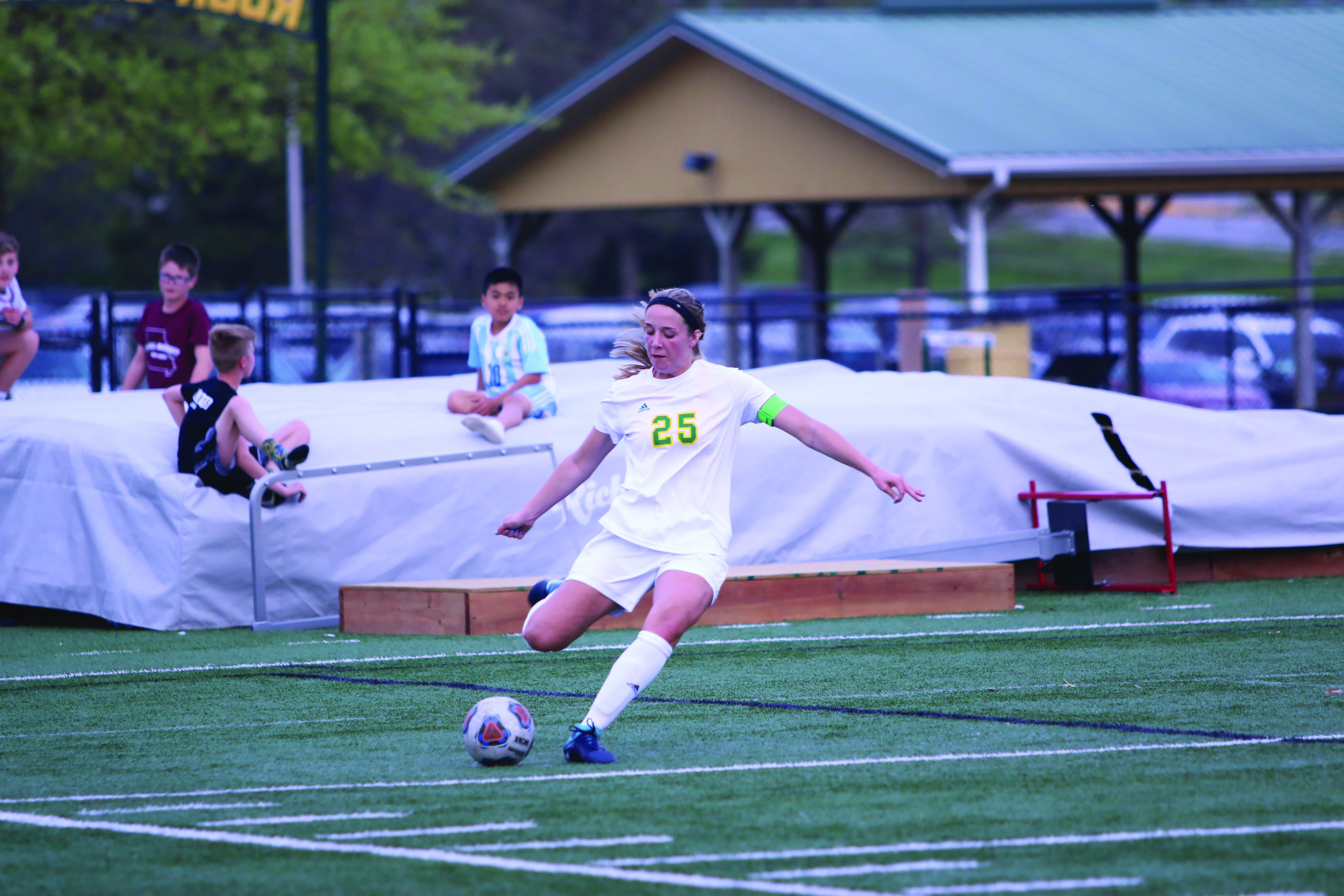 Senior co-captain and defensive player Allison Floyd, goes for the ball during the girls soccer game Wednesday, May 2. After ending a double overtime tied at zero, RBHS and HHS went into penalty kicks. The Lady Bruins fell to the Kewpies with a final score of (1-0 )and (4-3) in penalty kicks. The team will compete in districts on May 14.

With their [15-5-1] record, the varsity girls’ soccer team has had a strong season leading up to the start of their district tournament against Waynesville High School at 5 p.m. Tuesday, May 15. With the Tigers’ [7-13-1] record, the competition will be close, but with  strong leadership of team captains like senior Megan Floyd, the Bruins are confident they will hold their own. After four years of hard work, Floyd is ready to face their upcoming district competition.

“[Winning] would mean a lot to me since we won it last year,” Floyd said. “I just want to go as far as we can.”

In preparation, Floyd said the team has been working on playing together for “the full 80 minutes and winning all the 50/50 ball,” situations when both teams have equal chances of gaining possession, giving them more opportunities to score.

The greatest obstacle they face, Floyd said, is their own mental preparation; listening to music together and talking about the game plan beforehand helps them work cohesively.

Head coach Gary Drewing recognizes the end of the year brings graduation, prom and finals, a potentially lethal combination for his team during their already short season.

Still, he is optimistic because of  his player’s consistent development and potential for future growth since, by this time in past years, the team has hit a plateau while the current team’s skills are still on the rise.

The Bruin’s strength this season comes from a defense comprised of four seniors with experience leading from the back. Drewing said the team’s strategy was created around the defense and, the girls are on track to give up fewer goals than last year.

“We’re young in the middle of the field,” Drewing said, “[We are still working on] getting fluidity out of what we do and being on the same page.”

He said part of what will contribute to the Bruins’ success is their ability to find a team identity. Once they become secure in it, Drewing said, the group will be able to compete with the mindset that they have put in too much time to play at anything less than their full potential.

Drewing said the whole team struggles with having a consistent level of output, but he is confident they have the potential to improve.

“Soccer goes up and down,” Drewing said, “but our effort needs to be the same or at a high level.”

Senior Allison Floyd, a co-captain and defensive player, is ready to face these challenges. For her, taking home first place would be a special experience since she is graduating. She said everyone takes district games more seriously because “whenever you lose, your season is over.”

Allison Floyd said her team’s greatest obstacle has been having goals scored on them early in the game because they did not come out on their toes. Challenges aside,

“You can’t think about the past or the future,” Megan Floyd said. “You’ve just got to think about what’s going on in the moment.”

Using music to set a mood