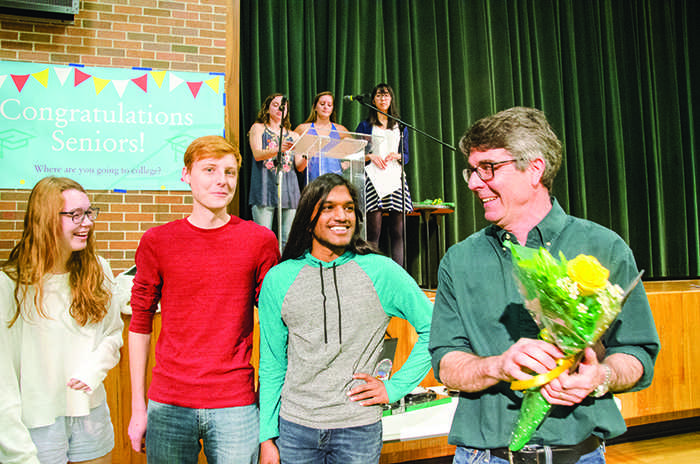 Seniors Kelsey Morgret, Kevin Kiehne and Dilan Kurukulasuriya give flowers to Advanced Placement (AP) Physics teacher Malcolm Smith after thanking him with a Bruin of Our Life at the Flashback assembly April 27.

RBHS will see its senior students celebrate their four years of achievements when they graduate on May 18. With the school year coming to an end, seniors have their final full day of classes today.

“I’m excited because we’ve had like four years to graduate,” said senior Elliott Stauffer, who is going to the University of Kansas because of family ties. “It’s going to be exciting to happen.”

Graduation day also affects students other than seniors, as they look forward to their departure toward the future but not so much saying final goodbyes to senior friends.

“I don’t want any of my senior friends to graduate, but I know that they are all very smart and will be successful after high school,” junior Stephanie Howell said. “So, part of me is excited to see what they do with their lives after graduating. My junior friends and I are wanting to plan a small get together with a few of our senior friends after school ends for all of us at the beginning of summer, which I think should be a lot of fun.”

Howell, along with teachers, parents and other students, will attend the commencement ceremony at the Mizzou Arena on the University of Missouri’s (MU) campus. Dressed in gowns and caps, seniors will sit through about an hour of speeches given by fellow graduates, such as Katey Klucking, and principal Dr. Jennifer Rukstad. The graduates will receive their hard earned diplomas and a handshake from a Columbia Public Schools (CPS) school board member.

The class of 2018 anticipates graduation ceremonies and prepares to transition into an adult environment, whether that means college, a technical school or a career. The cost of tuition for any college or university is one factor when soon-to-be graduates decide where to go and what to do after their graduation.

For senior Brian Jiang, whose father is a MU research chemist, family ties offered a financial shortcut to attending his college of choice other than the traditional scholarship aid.

“I am planning to go the University of Missouri in Columbia,” Jiang said. “It’s close to my house, and my dad works there, so I get half tuition off.”

As the son of a MU professor , Jiang said he is privileged to pay less in tuition and able to study his chosen major of information technology in his college of choice at the discount.

Perhaps because of the impending changes in their lives and exciting futures, seniors face the side effects of senioritis, where they have been slowly losing their motivation and drive for learning and completing assignments on time as the end of high school comes closer.

“Especially since athletics ended, I feel like there’s no real reason to be trying,” senior Addie Logsdon said. “And since I already got into the school I needed and got the scholarships that I wanted, it’s like, ‘What’s the point?’”