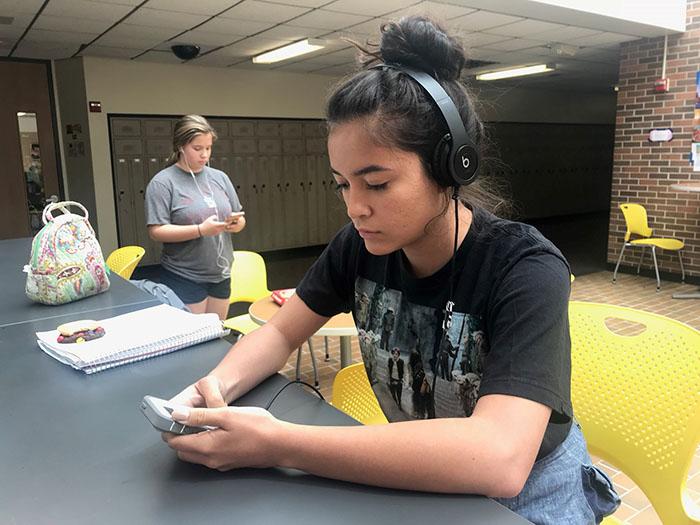 Sophomore Samantha Alexander and her family were singing to her grandfather as he laid in a hospital bed the day of his passing. Now, the song holds great importance to her.

“My grandpa woke up to us singing ‘I’ll Fly Away’ before he passed,” Alexander said, “which makes the song happy because of the memories we shared with him then but sad because it was some of the last memories we got.”

The hymn, and other Christian music, set a certain mood for Alexander.

“When I’m feeling happy, I listen to country or pop,” Alexander said. “But when I’m sad, I listen to classical or Christian music or just songs and playlists considered ‘sad’.”

Whether it’s the smooth, flowing sounds of a piano or the bumping bass of electro beats, music finds a way to fit any occasion. Upbeat and relaxing music, such as rock and classical, can “boost one’s mood” due to “increasing brain power,” according to an article by Pennsylvania State University (PSU). This makes sense with Alexander’s answer of pop music, but, according to PSU, much of country music isn’t considered uplifting. Instead, the country genre is easily seen as depressing, due to sad, relatable lyrics that can cause people to “feel the singer’s pain.”

Music is also good for stimulating feelings. At Northcentral University, Dr. Masha Godkin, a professor in the Department of Marriage and Family Sciences, said that classical music is great for studying. Music with little to no lyrics and beats are less distracting and make it easier to stay focused. So when looking for the best songs to play while studying, choose classical music, smooth jazz, or even nature sounds to drown out the silence of concentration.

“I love listening to classical music while studying,” Alexander said. “I usually just play local classical stations on the radio, like 90.5.”

Working out or exercising are another popular times to listen to music in order to get pumped up. Playing music while exercising or playing a sport can give a person “bursts of intensity” and allow them to synchronize their movements with the beat of the song, according to the Health Sciences Academy. Rap music can be inspirational and encourage people to “beat the odds” because of narrative lyrics that speak of people “overcoming obstacles,” says Upworthy.com. This helps develop a mindset of working for success, like winning a volleyball game.

Alexander said she listens to rap while exercising because it is upbeat and that the “passionately versed” songs add to her motivation.

“I listen to rap when I’m working out and prepping for volleyball,” Alexander said. “It helps me get hyped up before a game.”

Fellow sophomore Abby Schooley, said she also listens to rap before their games, but, more specifically, she enjoys rap from the early 2000’s.

”Some of his [Eminem] music I consider ‘throwback’, which I like to listen to with friends and when I’m in a good mood,” Schooley said. “Listening to music that puts me in a good mood helps get me excited for my games.”

When hanging out with friends, Schooley says she listens to rap and throwback 2000’s music.

“Most of the throwback music we listen to is pop and R&B (Rhythm and Blues),” Schooley said. “It gives us a nostalgic feeling, reminding us of when we were kids.”

Schooley and her friends are not the only students tuning into familiar childhood songs.

“[My friends and I] listen to pop [or] whatever is on the radio,” junior Riley Jones said. Jones went on to explain that “sometimes someone will turn on weird music related to an inside joke” among her friends, creating a comfortable, yet comical, mood within the group. Listening to different music when with friends is a great way to discover new tunes and to further connect through similar music tastes.

“The best kind of music are the songs you can dance and scream the lyrics to at the same time,” Schooley said.