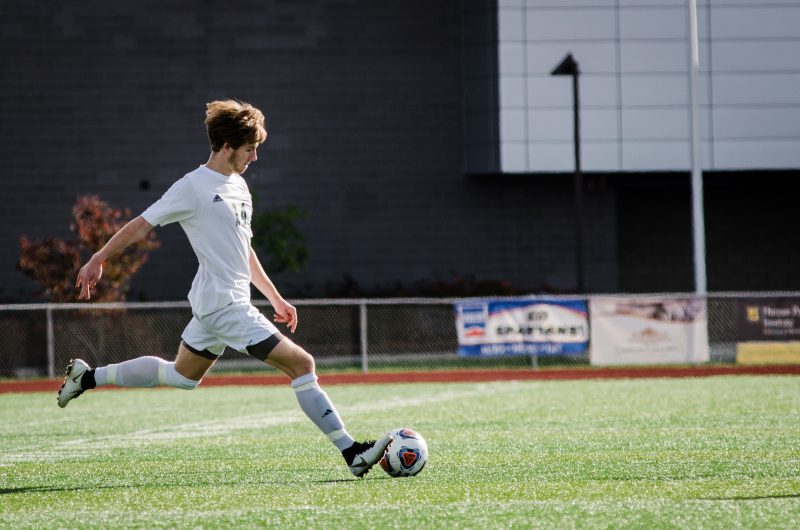 The ] varsity boys’ soccer team is off to a strong start, defeating Kickapoo 6-2 in the second game of the season.

With the assist of junior Preston Fancher, senior Nate Durdle scored in the 11th minute of the game, giving the Bruins a great kick off.

“We had many goals that our team focused on,” Fancher said. “Our main focus was to possess the ball and pick times to find a through ball for our forwards and [to] use our speed to our advantage. “

After achieving the team’s goals during the game, senior Carson Linder was proud of the Bruin win and is looking forward to having a successful season.

“We have a have a lot of returning starters so we are looking forward to a very successful season,” Linder said. “However, in soccer one goal can change the game and it was great to get two wins under our belt.”

The boys’ soccer team has a lot of first year varsity players this season. But Linder said they’ve really stepped up to give the team some depth.

Senior Trent Dunlap, shines light on the first year varsity players. Although for some individuals this is their first year on varsity, it doesn’t feel much different to Dunlap.

“I know that we have played with a lot of [first year varsity players] in the past,” Dunlap said. “I think [they] do a great job and offer a lot to the team.”

As a senior, Linder would like to help the team get their first state championship, especially after all the hard work they have put in for this season.

“This was the earliest we started our offseason. As soon as our last season ended we began lifting and practicing as a team,” Linder said. “We put in a lot of work and it’s really going to pay off.”

The team will hope to continue its winning streak Aug. 28, when the Bruins match up against Hickman at Cosmo Field at 7:30 p.m.

What did you think of the game? Let us know in the comments below.