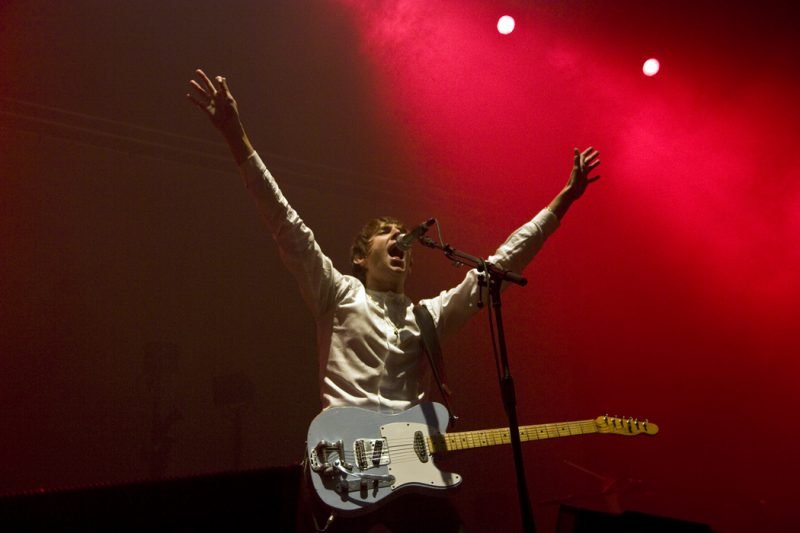 Miles Kane’s third studio album is a rollercoaster from start to finish, high-tempo head bangers dominate the tracklist.  Released on Aug. 10, 2018, Coup De Grace mixes The Ramones and other rock icons with a Beatles undertone.  Kane has taken his style from past works like 2011’s Colour of the Trap and 2013’s Don’t Forget Who You Are and put it into overdrive.  Gone are elegant back-up singers on songs like “Take the Night From Me” or “Colour of the Trap.”

Kane takes his Beatles’ influence and throws it in the backseat, replacing it with punk rockers like The Ramones and The Clash.  The closest Kane has ever gotten to his new style were on his songs “Give Up” and “Bad Habits.” In almost every song Kane seems to spit out the lyrics in a rage.  The name of this latest album comes from Kane’s favorite WWE Wrestler, Finn Balor, whose infamous move is his “coup de grace” or final blow. The wrestler was even featured in the music video for “Cry On My Guitar.”

Taking heavy inspiration from punk rock, tracks like “Too Little Too Late” jump out like a tiger on the loose. The opening track is a melting pot of different artists’ sounds like The Vaccines, Foo Fighters and The Ramones.  Each track has its own unique quality that makes it standout.

“Killing the Joke” is a mellowed out song that takes the point of view of a gloomy singer who is frustrated at being so pessimistic.  Through lyrics such as, “You’re my top one-hundred shows, why do I always have to go killing the joke?” Kane paints the picture of the artist who wants to see his love so badly even when she left him and he’s “left the TV on let the milk go sour, let the bills pile up.”

Toward the end of the song is when Kane really shows that he’s been left alone and it’s taken a negative toll on him.  The lyrics do a good job at using basic storytelling, but what ties it all together is the melody itself. The use of acoustic guitar and synthesizer sets the mood for more of a melancholic setting.  The song is somewhat similar to Liam Gallagher’s “For What It’s Worth.” The track is a great buffer after the chaos that is “Cold Light of the Day” and the dance anthem “Coup De Grace.”

The track “Wrong Side of Life” shows an immense amount of emotion through Kane’s style of singing as well as the melody.  It starts off with an intelligible echo that slowly straightens out with “There’s the water, the water, you’re just my mirage” with Kane singing very elegantly before the synthesizer is cut off by a sudden strum from the guitar.  What makes the song so great is Kane’s style of singing, which lends to the storytelling. Kane does an amazing job at taking the persona of a desperate lover who just wants to prove to his lover he is the one for her. What stands out the most are the lyrics “I was sitting on the throne like Mark Antony, I’d die for you” and “I just wanna vibe with you, get high with you, losing control.”  Kane effortlessly shows the disparity and aching in his voice which adds to the overall story.

As a whole, the album has a constant theme of rejection and guilt.  In the song “Loaded,” Kane sings about how “My baby’s always threatening to leave” and later on in “Something to Rely On” he sings “I don’t want to let this sadness rule my heart.”  The album isn’t a perfectly linear piece of work but it does tell a loose story of this singer and shows his growth as a person.

The closing track, “Shavambacu,” really ties the whole album together neatly.  The title comes from Kane’s mother who accidentally made up the word after mishearing a Dean Martin line. The confusion even makes it into the song, “My French is bad, some say “Je t’aime beaucoup” I say, my darling “Shavambacu.”  The song really shows that the protagonist of the story, whether it be Kane himself or a figment of his imagination, has finally found some happiness.  Gone are the wild and loud guitar riffs, drums and basslines, replaced by a much simpler melody. Even Kane takes a more traditional route while singing.  The song itself has an eerie and dissonant echo to it that trades over and becomes upbeat during the chorus.

After such a wild ride in the past nine songs, “Shavambacu” is the perfect ending to the album and is somewhat of a callback to Kane’s earlier works.

Coup De Grace as a whole is a huge change from what Kane has done in the past.  His first two works were focusing largely on being in love and the perks of love while now Kane is alone and singing about his shortcomings.  The new tone is different but also works with his new style. Coup De Grace is a beast by itself and really proves that Kane knows what he’s doing and can change his style up easily.

What do you think about Miles Kane’s new music? Let us know in the comments below.

What does summer mean to you?

Softball kicks off new season with Green and Gold game