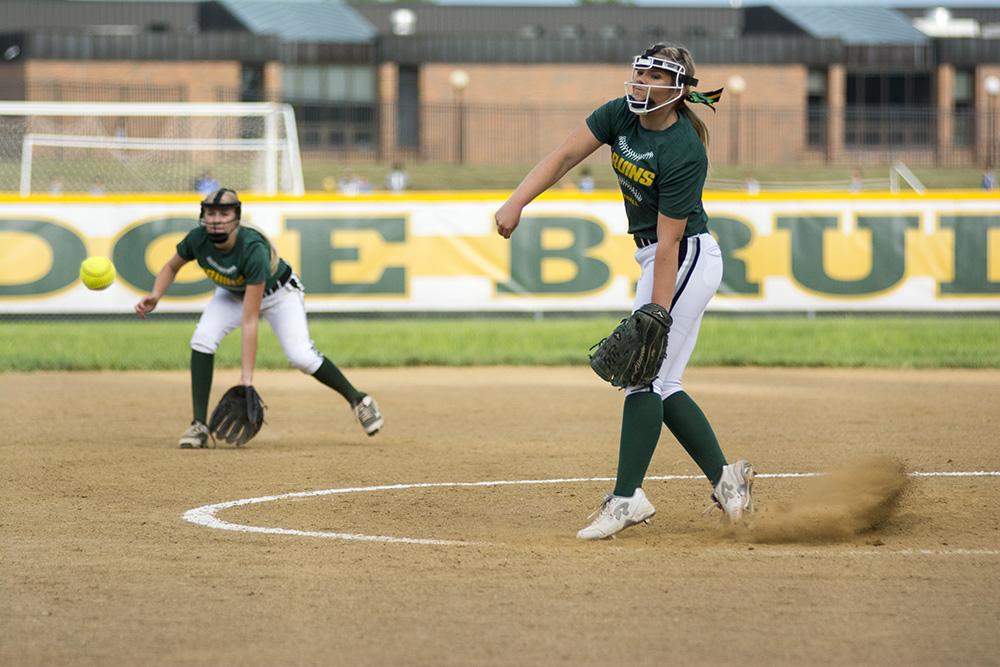 Senior Gemma Ross pitches to members of her own team during the Green and Gold scrimmage game on Aug. 23. Photo by Maya Bell

In preparation for its first game of the season on Monday, the RBHS softball team split in half to compete in a Green and Gold scrimmage on Thursday night. While the Gold team won the scrimmage, the event was a great opportunity for the girls to get used to playing in front of an audience and to get all their nerves out before a real game, junior Maddie Marrero said. The advantage of a scrimmage was that the girls were more relaxed as they played each other.

“It’s always a good time playing people from your own team; we scrimmage all the time at practice but getting to wear uniforms and have people watch us is a different feeling,” Marrero said. “Every time I’d go up to bat, Madi Steuber, the catcher on the green team would make some joke or I’d ask her to call everything down the middle.”

With practice every weeknight from 4:30 to 6:30 p.m., the athletes have plenty of time to perfect their game, build companionship and get the new players adjusted to the game. Coach Janel Twehous said the freshmen add good competition to the game, and she is pleased with how the game fit together for the Green and Gold game this early in the season.

“[During the] beginning of season you’re still putting the [pieces together],” Twehous said. “Figuring out each player’s [role], how the team [works together] best, who your leaders are, who wants the ball. [At the] end of season you’re fine tuning your team.”

While Twehous said the team still has skills to work on, she noticed that the girls seem closer than ever and enjoy each other while playing the game that they love. As for the Green and Gold game, itself, the scrimmage gave the girls an opportunity to compete against players they might not interact with as much during actual games. J

unior Chloe Simon found that the Green and Gold practice game gave her a sense of what to expect for the rest of the season.

“[The Green and Gold game] was actually pretty fun, we all get along pretty well with one another and so we were able to have fun and not be too serious while still getting the practice of being in a real game,” Simon said. “Technically it wasn’t the first game we’ve played since we had the jamboree on Tuesday, but those are considered practice games so some might consider this the first game.”

Though this was not Marrero’s first RBHS game and she knew what to expect, the scrimmage gave her the sense of excitement of a real game as she prepares to dive into her third season. She also believes that the Green and Gold game was exciting for everyone overall and the hardworking freshman boosted the team morale.

“Competition for our team really brings out the best in a lot of us, we tend to work better as a unit when faced with adversity. This year especially we have learned to be flexible and I think that has helped us during games too. ” Marrero said. “Overall, I’m excited to see where this season takes us and I think it’s going to be a good year.”

Which game of the regular season are you most looking forward to?