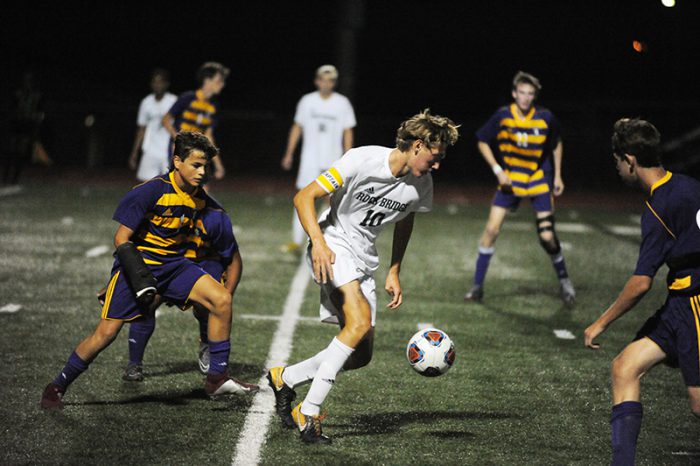 Flink turns away from a pile of Kewpies around him. Throughout the game, Flink slid many passes through the HHS defense. Flink has been a controlling factor of the Bruins' midfield this season. Photo by Allie Pigg.

At approximately 5:20 p.m., the clouds opened up on the south side of town, dumping buckets of rain around RBHS. The ominous sky seemed to be heading towards Hickman High School (HHS), where the RBHS boys’ soccer team, with a [5-2] record, was warming up to take the field against their Kewpie [3-4] cross-town rivals.

Luckily the clouds rolled away from HHS, allowing the Bruins to take the field with only slivers of sunbeams dropping onto the pitch. The passing clouds left behind a cool breeze and a vibrant setting sun, the colors matching the intensity of the play developing on the field.

Although their second match up of the season, the Bruin and Kewpie teams both came out ready to fight for their end of Providence Road. The crowd of parents, teachers and student supporters saw 80 minutes of continuous action with several attempts through set pieces and shots on goal from both side. The Kewpies found the back of the net with 41.9 seconds left in the first half, and the game remained scoreless after that, handing RBHS their first lost to HHS since the 2015 season.

Despite the heartbreaking loss, the Bruins embrace the competitive atmosphere of playing the Kewpies.

“You could sense it, the excitement, on their bench the entire second half and in how the crowd was into it,” Head Coach Scott Wittenborn said. “We’re disappointed because we worked and we wanted to win, but life is too short to worry about [the outcome]. We’ll learn from it and become a better soccer team from it. It’ll be alright.”

A week of games for varsity softball Sept. 4-11