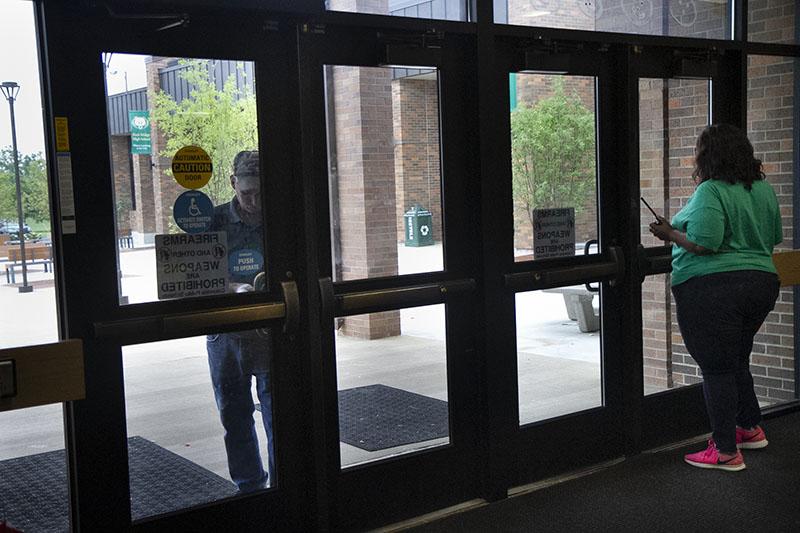 Custodial staff works with administrative staff to get the main commons doors to lock successfully during modified lockdown, Sept. 7. Photo by Camryn DeVore

At 11:54 today, RBHS as well as Gentry Middle School, Rock Bridge Elementary School and the Columbia Area Career Center were put in lock down “due to an apparent bank robbery on Green Meadows Road,” RBHS principal Dr. Jennifer Rukstad said.

RBHS programs south, north and main entrance doors to open for lunch period and let students back into the building. During the lockdown, passing period in between second block class and B Lunch made doors unlock automatically and staff had to manually override them, said assistant principal Dr. Lisa Nieuwenhuizen.

The RBHS Club Fair was happening in the main commons as the lockdown event occurred. Senior Polina Kopeikin, who was running the drama club booth, said students attending the fair were told to return to class, while students running booths were given no instruction to leave.

Assistant principal Dr. Tim Baker said normally they clear the halls during a modified lockdown or lockdown drill; however, because of the crowds of people from the club fair, they decided not to.

“There’s always the question of do we want to clear the hallways or not. If there are an excessive amount of people in a hallway, forcing everybody to go pack to class, sometimes, you can instill a little bit of a panic,” Dr. Baker said. “Since this was a modified lockdown, this was an outside threat, we were fairly confident it wasn’t a threat to us. So what we did is we asked some people who were by the doors, who were by the windows, to move.”

Besides asking some students to leave the Club Fair hallway, other protocols were still implemented.

“We had adults at every door. I saw Dr. Grant let a student in with a student ID and verify that she was a student here,” Dr. Nieuwenhuizen said. “Dr. Grant let her in, but that was the only person we let in the building.”

Also at the Club Fair, senior Harper Dailey felt the lack of control on the locking mechanisms was worrisome.

“I felt like the situation was handled the best they could, but I don’t think it was really smart to keep all of us out in the main commons while the lockdown went on,” Dailey said. “I personally didn’t feel safe sitting out there, and other kids I talked to didn’t feel safe either.”

The real takeaway from Kavanaugh’s hearing