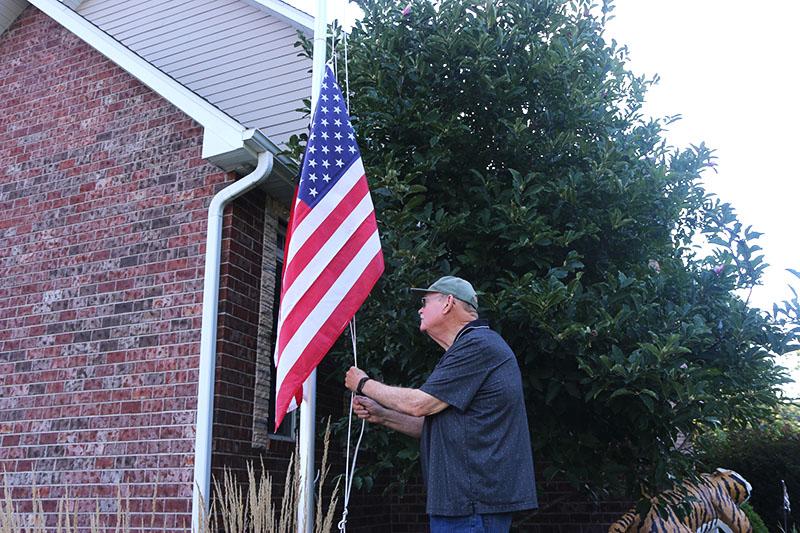 Robert Wagner raises his flag before going about his daily chores. Photo by Camryn DeVore.

Bob Wagner always held his tongue when it came to reminiscing his deployment in the Vietnam War. The story he came to tell when finally confronted about his past was a tale with many twists and turns one may never have expected. He graciously labeled this section of his life story as “Bowling my way to Vietnam.”

After just two years of college Wagner decided to take up professional bowling, not thinking about the draft that had been right around the corner. College students were granted a deferment from the draft, professional bowlers on the other hand were not. After two years of professional bowling and marrying his now wife, Brenda Wagner, he was eventually drafted into the Vietnam war. While reminiscing on the unfortunate timing of him being drafted, Wagner quoted the famous saying “When life gives you lemons, make lemonade”

While Wagner didn’t discuss much of the events that took place during his deployment, he made sure to mention the hardships of his return back into society, of how he faced criticism of many forms.

“The country was much different in the late ’60s than it is now. A lot of turmoil, a nation divided. When [you] came back from Vietnam you weren’t looked at as a hero or a walking return, you were looked at as something other than that.”

Wagner took this struggle in stride gracefully,keeping his composure when stationed next to the University of Indiana. Where many of the attending students harshly disagreed with war and according to Wagner were “very much-anti military, anti-war, anti-establishment.” He refused to accept the hate comments of his fellow students as he returned to school at the University all while wearing his uniform to class.

After finishing his classes in Indiana he moved back to Columbia, Missouri where he finished his education. He has spent the rest of his life here to this date. Where he now happily lives with his wife and sees his two children and three grandchildren on close to a daily basis.